On Wednesday 18 May 1831 the 251 ton British brig Thorne, a frequent visitor to the Cape, sailed out of Table Bay destined for London with a cargo of colonial produce. When the vessel was near Robben Island, a sudden, dense fog arose making visibility impossible. Shortly afterwards the Thorne struck a rock on the western side of the island. Boats including the Northwester and Messrs Sinclair’s and others were immediately sent out to assist. The Port Captain was first on board the stricken ship but ‘he found the rudder unhung and the water up to the hold-beams’ and there was no hope of saving her.

The following evening, the boat Northwester took off part of the Thorne’s cargo of beef, hides and skins. Mr Sinclair superintended the landing of goods on Robben Island. The passengers’ baggage was saved, as were the passengers and all members of the crew.

A report on the wreck made the front page of the South African Commercial Advertiser on Saturday 21 May, smugly mentioning that the Cape Underwriters could congratulate themselves ‘on their fortunate escape … not a single policy, either on the Thorne or her cargo, was affected at the Cape. The insurance of both was done in England and Calcutta. 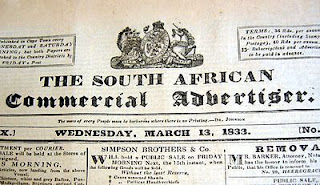 The parties insured, however, will have to wait about 12 months for the settlement of their various claims, a fact which speaks most powerfully in favour of Colonial Underwriting.’

It had been a disastrous year for the Thorne. In June 1830, on her way to Table Bay, she had experienced severe gales which had washed away her bulwarks and caused other damage to the ship, forcing her to put in at Plettenburg Bay. At that time she was commanded by William Johnson (or Johnston). The Thorne was not a coastal vessel, but sailed further afield to India, England and Mauritius as well as the Cape ports, carrying a variety of cargo (on the Mauritius to Cape run she carried sugar, from Knysna she carried timber), passengers and mail.

Johnson was still her captain in January 1831 when she made a voyage from Table Bay to Algoa Bay. However, on 25 March of that year, the Thorne arrived in Table Bay under W Poole who had taken over command when Captain Johnson died during the voyage. The South African Commercial Advertiser announced on Saturday 26 March 1831, the death on 21 March, of Mr William Johnston [sic], master of the bark Thorne, aged 30 years.’

Poole continued as captain of the Thorne for the succeeding months and it was under his command that the brig struck the rocks at Robben Island in May 1831.

The press reported that young Poole was ‘plunged into utmost grief and distress of mind; but from all we can collect, it appears no blame attaches to him – the heavy fog and the darkness of the evening assisted perhaps by the current, being the immediate causes of the misfortune.’

Despite Poole’s youth and inexperience as a master, he probably was not responsible for the loss of the Thorne. Fog was a common cause of shipwreck along South Africa’s coastline, vessels running on to islands or reefs, and sometimes into each other. Early 19th c mariners relied on visibility as well as on charts which might not be entirely accurate. Navigation at night was particularly difficult when instrument readings could not be followed up by clear observation of the area, and depending on date there may not have been lighthouses to help delineate hazards.

The Robben Island lighthouse was not in commission until 1865, thirty-four years after the wreck of the Thorne, though Jan van Riebeeck apparently thought it important enough in 1656 to select personally a suitable site on the Island for making signal fires – this was the highest point on Robben Island, known as the Vuurberg, and the present lighthouse stands on the same site.

Archival records held in the Cape and local newspaper reports allow us to track the Thorne in some detail. In February 1828 she left Bombay bound for London; arrived in Simon’s Bay 3 June, left 8 June; with a cargo of sundries and two passengers. The following year she left the Downs (England) bound for Cape Town, arriving Table Bay 13 August, left 28 September; agents were Thomson and Co.; cargo sundries and 1 passenger; brought mail. On 4 May 1830 Thorne left Mauritius bound for Cape Town; arrived at Table Bay 29 Jan, left 3 March.; agents were still Thomson & Co., cargo sugar & passengers; brought a small mail. The significance of these activities, which were all in a normal day's work for this type of ship in the 19th c, becomes clear as we pursue the Thorne’s story.

In June 1830 the vessel was damaged during severe gales. The following year, in March 1831, her captain, Johnson, died at sea, and two months later the Thorne was wrecked. Superstitious mariners might at that stage have described her as an unlucky ship.

However, for me, as well as for other interested descendants, the Thorne has a redeeming feature: she was responsible for the arrival at the Cape of our ancestor William Bell and the start of his career as a mariner in the coastal waters off South Africa.

Thanks to Anita Caithness (family historian, friend and archivist for references to Thorne), Sue MacKay (newspaper transcriber and provider of many Bell and Conch references), Harold Williams (the lighthouse man) and Malcolm Turner (the shipwreck man).

Hello! I have been researching the tale of the S S Thorne. The ship's bell hangs in the belfry of our little Anglican Chapel here in Wilderness. It was donated by the Piggott family in 1951. I am interested in finding out the connection between S S Thorne and the Piggott family, and how the bell came to be in their possession for more than 60 years before they gave it to the Chapel.
Your entire blog is extremely interesting. Thank you!
Joan Musto
Wilderness

Joan thank you for your comment but I have no further information on the Thorne, Nor do I know of its link with the Piggott family..There was another vessel named the Thorne, different date, see https://www.wrecksite.eu/wreck.aspx?10695

Thanks for your kind remark about my blog
Best Wishes Mole