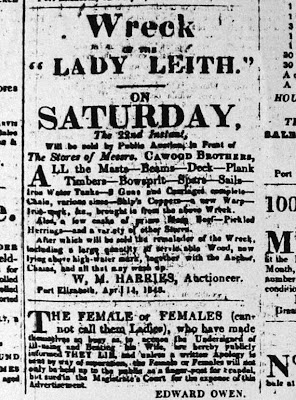 On Saturday the 22nd Instant will be sold by Public Auction in front of the stores of Messrs Cawood Brothers All the Masts, Beams, Deck, Plank Timbers, Bowsprits, Spars, Sails, Iron Water Tanks ...Guns and Carriages complete, chain, various sizes, Ship's compass, a new Warp, Iron-work etc brought from the above wreck. Also a few cases of ... Beef, Pickled Herrings and a variety of other stores. After which will be sold the remainder of the Wreck including a quantity of workable wood, now lying above High Water Mark, together with the Anchor, Chains and all that may wash up.
W M HARRIES, Auctioneer
April 14 1848

The brig* Lady Leith was entering Algoa Bay after sailing from Waterloo Bay when a south-easterly gale forced her on to Thunderbolt Reef, 27 February 1848. Her captain was James Ramsey Caithness jnr., brother of Mary Ann Bell nee , and brother-in-law of Captain William Bell of the Conch.

Henry George Caithness was also living at the  captain of the schooner Louisa in 1839 and of the Fame in 1840, sailing between Table Bay and (), and also to Mauritius, carrying colonial produce.

Though the Lady Leith became a total wreck and her remains were auctioned off in bits, there were no lives lost.