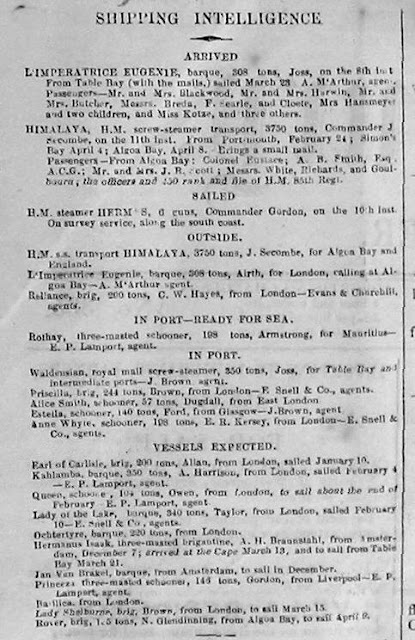 Passenger lists for the barque L'Imperatrice Eugenie and the screw-steamer Himalaya. Typically, there are no names given for troops of the 85th Regiment on board Himalaya.Note also under Vessels Expected the two Dutch barques, Hermanus Isaak and Jan Van Brakel bringing emigrants to New Gelderland, Natal under Colenbrander's scheme.
Natal Mercury 14 April, 1849 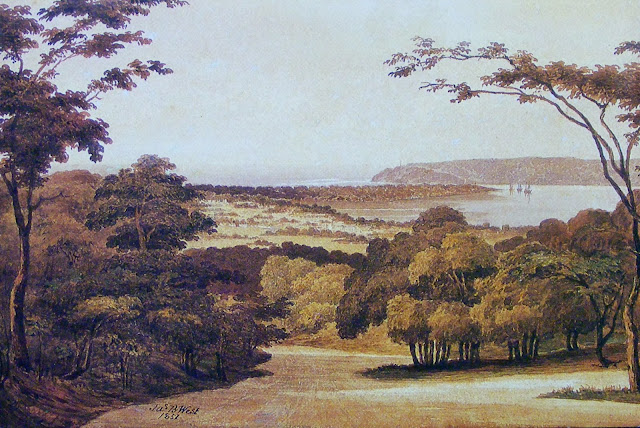 Port Natal from the Berea by James West: shows Bluff (no lighthouse yet), Point
and sailing vessels in the Bay.

On 10 April 1898 Head Lighthousekeeper at the Bluff, Frederick STEPHENSON, wrote to Charles CROFTS, Engineer in Charge of the Natal Harbour Works, to report "a serious accident which happened about 4 p.m. yesterday whereby a man named WILLS ... fell from the top of the Lighthouse to the enclosure below. He was immediately attended to by the Dr. of the Naval Corps and removed to the hospital."

The 2nd Lighthousekeeper, who was on duty at the time, had been asked by four Naval Volunteers to conduct them on a tour of the lighthouse and when entering the gate two civilians also came running up and asked if they might be included. When in the lightroom the civilians and some of the Natal Naval Volunteers went outside on to the balcony, while the keeper was explaining the workings of the light to one of the other men. There was a sudden shout that a man had fallen over.

WILLS had ascended the ladder leading to a small footway round the lantern, used by the keepers when cleaning the glass of the lantern, and fell from this to the ground, a distance of over 70 feet. He died in hospital at 9.30 the following evening. Charles Crofts reported to the Minister of Land and Works that WILLS had been employed in one of the shops owned by Randles Bros & Hudson in Durban.

From the official Instructions to Lighthousekeepers, it would seem that the keeper on duty had allowed six visitors to enter the lighthouse at the same time, when three was the maximum number laid down in the regulations - which were many and detailed:

"The lightkeepers are expected to conduct themselves with civility to strangers by shewing the premises at such hours as are convenient, and do not interfere with the proper duties of their office, it being expressly understood that strangers will not be admitted into the lighthouse after sunset and before 10 a.m. No children under ten years of age to be admitted into the lightroom at any time. No money or other gratuities shall be taken from visitors on any pretence whatever. No more than three visitors shall have access to the lightroom at one and the same time. The lightkeeper must not on any pretence whatever admit persons in a state of intoxication. No visitors entering the lightroom shall be permitted to handle any part of the Apparatus or make drawings thereof or to take any dimensions unless he produce a written authority for so doing from the Colonial Chief Engineer and on no account is any visitor to be allowed to enter the lightroom or to remain in it without one of the lightkeepers being present. No smoking to be allowed by visitors within the lightroom, nor are they to be permitted to bring food or liquor into the lighthouse under any pretence. No dogs are to be allowed to enter the lighthouse."
Whether the unfortunate WILLS was "in a state of intoxication" or merely succumbed to an attack of vertigo, history doesn't relate.

The lightkeepers' rules also mention that "a book shall be kept at the lighthouse in which all visitors are to enter their names. This book is to be under the charge of the Head Lightkeeper."
If that visitors' book were to have survived, what a wealth of names from Durban and elsewhere it would offer. Apart from this volume, the Head Lightkeeper kept a daily journal, of which a copy was sent to the Colonial Engineer every month, as well as a report book in which remarks as to incidents which might occur during the watch were noted as well as the times at which the keepers came on and off duty. Sadly, none of these records are still in existence.

For my article Keeper of the Bluff Light see:
molegenealogy.blogspot.co.za/p/keeer-of-bluff-light.html
Posted by Mole at 11:22 AM No comments:

Souvenir Saturday: A Light on the Bluff

Prior to January 1867 Durban was without a lighthouse and this led to frequent mishaps with shipping. The Natal Mercury reported in the late 1850s (an era of much emigration to Natal) as follows; 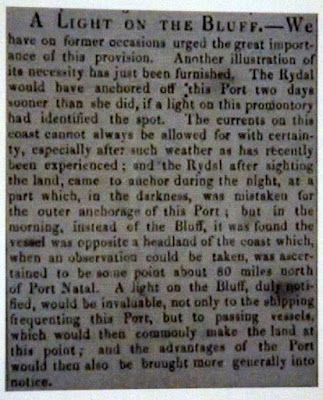 A Light on the Bluff: We have on former occasions urged the great importance of this provision. Another illustration of its necessity has just been furnished. The Rydal would have anchored off this Port two day sooner than she did, if a light on this promontory had identified the spot. The currents on this coast cannot always be allowed for with certainty, specially after such weather as has recently been experienced; and the Rydal after sighting the land, came to anchor during the night, at a part which, in the darkness, was mistaken for the outer anchorage of this Port; but in the morning, instead of the Bluff, it was found the vessel was opposite a headland of the coast which when an observation could be taken, was ascertained to be some point about 60 miles north of Port Natal. A light on the Bluff, duly notified, would be favourable, not only to the shipping frequenting this Port, but to passing vessels, which would then commonly make the land at this point; and the advantages of the Port would then also be brought more generally into notice.

Note: for a passenger list of the Rydal in 1854 see
molegenealogy.blogspot.co.za/2013/12/passengers-to-natal-rydal-1854.html

Unexpected and useful nuggets of information arise while browsing local newspapers. Even a tiny snippet such as the one below fills a gap in the Bell family history.

The Ferdinande – 'James Colquhoun, son of Mrs Bell, widow of the late Port Captain Bell arrived in the Ferdinande. He is, we believe, anxious to get employment here, so that he may be with his family.


James may not have been successful in getting employment in Natal. Whatever the case, he fetches up in England a couple of years later, marrying Sarah Clark at St Mary Stratford, Bow in September 1874. Sarah had been born in Blackfriars London ca 1851. By 1891 James and his large family were living in South Shields where he worked as a Marine Enameller (painting done on ships).. 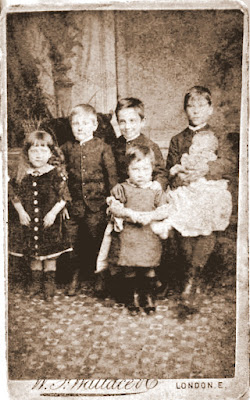 Acknowledgements:
Gordon Brown, descendant of James Colquhoun Bell
Posted by Mole at 10:42 AM No comments:

Acknowledgements:
Drummond Corrie
Posted by Mole at 6:40 AM 1 comment:

Was your ancestor on Waratah's maiden voyage? 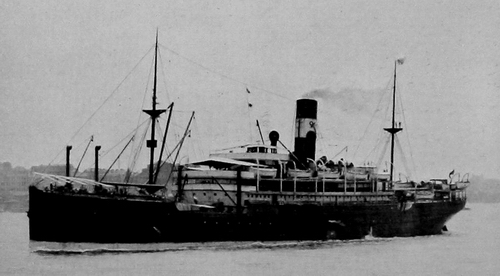