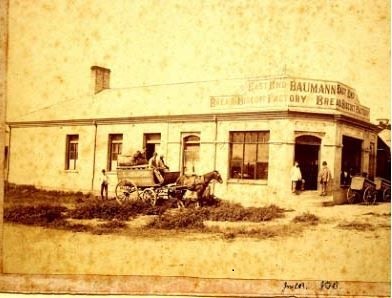 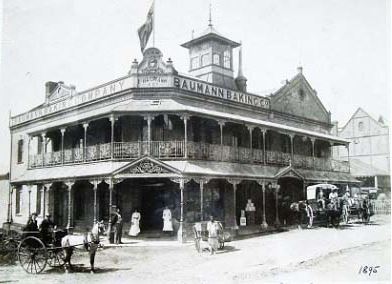 Baumann's Bakery 1895 after addition of 2nd storey and lantern ceiling.

Easter cards emerged in the 1870's and were popular from the beginning of the 1880's forward. Perhaps they caught on slower as it was a religious holiday and it might have taken time for the public to regard sending cards as socially appropriate.

The first Easter cards emerged in striking colours and sometimes with silk fringe. Beautiful chromolithographed images required separate pressings by inked stones, one press for every color in the design.

Easter cards of the 1880's illustrated well-known holiday and secular themes featuring children mixed with traditional symbols of new life and spring implying Easter's religious significance of rebirth and resurrection. A child might hold an egg, watch an egg open, gather eggs or emerge from a cracked egg as if he or she was a young chick being born. Some children watched eggs that would crack and reveal flowers, a chick or a rabbit. Sentimental cards featured children in bird's nests as if the child was a little bird nesting against a spring scene. These children were sleeping, waiting to wake to the spring and rebirth of the Easter season. Some 1880's cards were comical. Artists used eggs as a large feature to the design including parts of a bicycle or a hot air balloon. 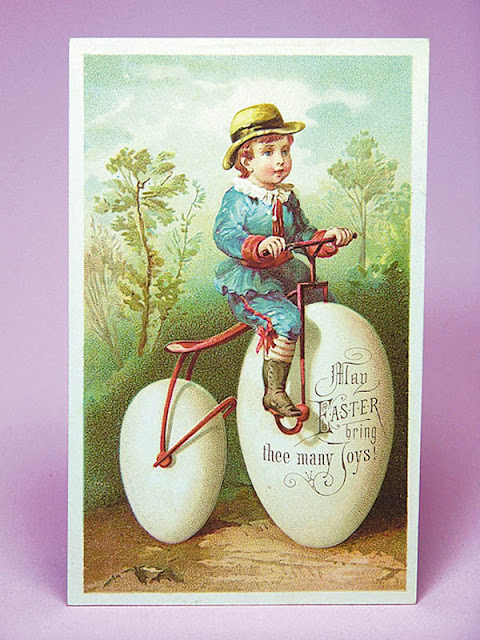 Familiar spring features such as birds, butterflies and early flowers like crocus or apple blossoms were popular through the 1880's. In addition to the secular images, an Easter cross or lamb with religious verse also appeared on some cards. Rabbits appeared in two forms on 1880's cards. Some cards featured rabbits in a spring setting symbolizing the fertility of spring. German cards also featured an Easter Bunny, delivering an Easter card and coloured Easter eggs to children.

Victorian greeting card designs reflected changes in 19th-century taste. The Aesthetic movement (1868 - 1901) brought Asian-inspired designs and natural design elements. By the middle of the 1880's, Easter and other greeting cards adopted naturalistic designs and a subdued, earth toned color palette. Easter cards had greater religious themes, which included cherubic choir-singing children. Popular chicks and flowers continued to appear. By the very late 1890's, crosses were appearing with greater popularity. Easter greetings in the Art Nouveau and Edwardian periods are some of the most aesthetically beautiful of all greeting cards.

Acknowledgement: https://antiquesandauctionnews.net/articles/Victorian+And+Edwardian+Easter+Greeting+Cards
Posted by Mole at 11:53 AM No comments:

Souvenir Saturday : the Titanic on her way 1912 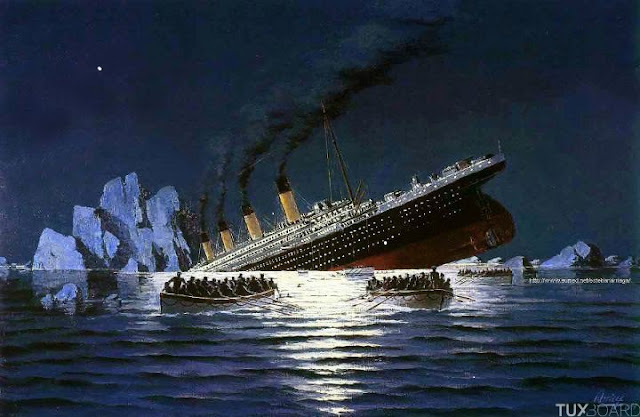 RMS Titanic departed Southampton on 10 April 1912, colliding with an iceberg during her maiden voyage to New York City.  As one lady reportedly remarked from one of the lifeboats, Now there's a sight you don't see every day.

At least 13 couples chose to celebrate their honeymoon on the Titanic.

Read more revelations about the Titanic at

Shipwrecks and the Rocket Apparatus at Natal 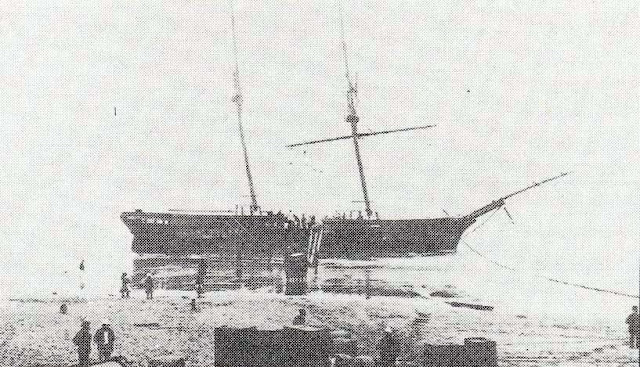 At the port of Durban numerous lives were saved by means of the rocket apparatus, fired from the 'rocket house' on shore to vessels in distress. A case in point was that of the Luna, a British brig commanded by Captain Grube which was wrecked on the Back Beach on 2 September 1880. She had sailed from London. Her cables parted during a south east gale - the story of many a ship at this port.

The entire crew survived the wreck, being brought ashore after use of the rocket apparatus.

Another ship whose crew were rescued in this way was the Theresina, a British brigantine wrecked on the Back Beach on 9 April 1878 after a voyage from London. A similar incident occurred on 2 August 1878 when the American barque H.D. Storer parted her cables and ended up on the beach after a voyage from New York.

These unfortunate events were the direct result of ships lying in the roadstead as they were not able to enter the port because conditions over the bar were adverse at the time. Various harbour engineers attempted to solve the problem of the bar.

British harbour experts had to rewrite the text book on tidal scour. Massive breakwaters, exposed to the furies of the sea, had to be constructed. Tidal power is an untiring force of nature. But when there is a never-ending stream of sand passing a harbour entrance, tidal action becomes an engineering nightmare. There was only one solution: persistent dredging. 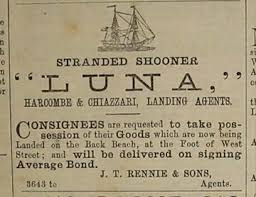 My informant Denise Neufeld reports:
I was reading a newspaper account of a relative, Jonas Puddy House, who had his goose stolen.  It was  surprising to see the thief labelled as a "gentleman."
What happened was the thief and his friend had been drinking.  Jonas had his geese penned near the stone wall of his property and the thieves could hear them.  They had a pony and trap and one man stepped from the trap onto the wall and then got onto Jonas' property.  One witness saw him step onto the wall and then I think he said a bit later he saw one holding a goose but he didn't actually see it taken from Jonas' property.  Another witness saw one man on the road holding a goose.  The accused said he'd been drinking and ran over a donkey and a goose.  Neither witness saw the mythical donkey.
When Jonas was being cross-examined the defense lawyer asked Jonas if he would take compensation for the goose in return for dropping the charges.  A police officer there protested and said he'd never heard such a proposition made in the middle of testimony.  The lawyer said that the men had inadvertently run over the goose and put it in the trap (eating it the next day) but it was just a lark.  There was no felonious intent.  Despite the protest of the police the magistrate (who probably knew the accused) agreed there was no felonious intent and released the prisoner as long as he paid Jonas House for the goose.  He advised the prisoner in the future to dine wisely and not too well.  The newspaper writer said "Not guilty, but don't do it again."
The newspaper wasn't impressed and asked if it had been a labourer would he have been allowed the same deal?  Didn't think so and gave a recent example of two labouring men who stole because they were hungry and who'd been given 3 weeks with hard labour.

It's nice that Jonas got recompensed for the goose but was it right to let the man off simply because he was a "gentleman."  But that's the way of the world. 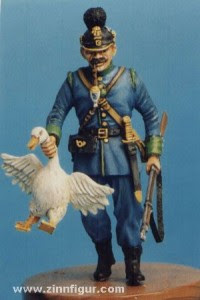 Jonas Puddy House, born 1830 and died 1905.  The goose incident probably occurred after 1866.  In 1861 he was living in East Brent but an 1866 directory has him in Lympsham* where the theft occurred. The case was heard in the Weston Police Court.

*a village and civil parish six miles west of Axbridge and six miles south-east of Weston-super-Mare, close to the River Axe in Somerset, England.