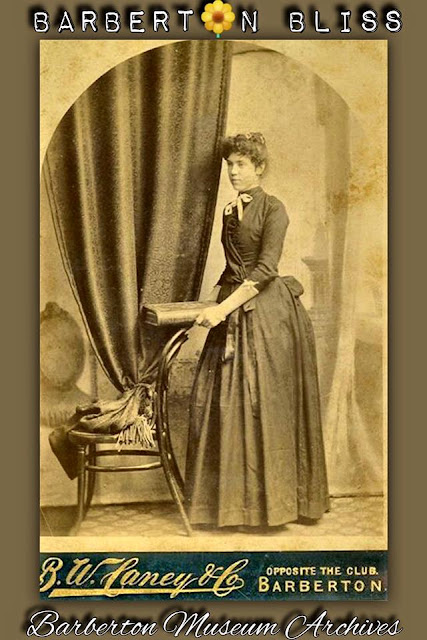 Young lady photographed at B W Caney's Barberton Studio,
'opposite the Club, Barberton'.

Apparently, Benjamin William Caney was operating in Barberton for a while but William Harry Caney took over that studio in 1889 continuing there until 1894. The following year his father Benjamin died.

Another famous Natal photographic family were the Caneys.

There is some controversy over the year in which Benjamin Willliam Caney arrived in Natal but he certainly founded one of the first jewellery firms in Durban in 1860, the year that the second Prime Minister of Natal, Mr. Harry Escombe landed in Durban, and the year before Benjamin's bride-to-be, Ellen Calvert, arrived aboard the Catherine (September 1861) from England.

Benjamin and Ellen made their home in the top floor of the 3-story West-Street building in which the business was founded and in which their three sons that were to take over the business were born. This skyscraper was later pronounced to be dangerous and the third floor removed. In the mid-nineteen hundreds, the property was sold to the Johannesburg Building Society, but the old firm continued its activities in the block, thriving for well over a hundred years.

William Laws Caney operated a studio in Durban from 1883-1893 before moving to Pietermaritzburg, where he remained for several years. In 1909 he was at 208 Church Street, Pietermaritzburg. Prior to his Durban phase, he ran a studio in Kimberley; then (1872) still known as New Rush, the town was renamed Kimberley in June 1873.


The Caneys are an example of a family of photographers who continued working through a couple of generations as well as in various centres in South Africa: something to bear in mind when dating photographs. 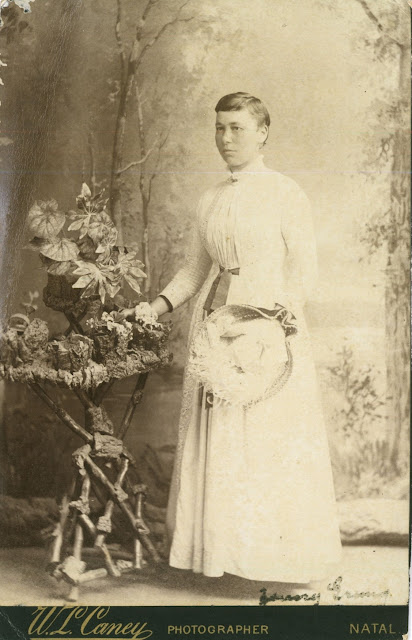 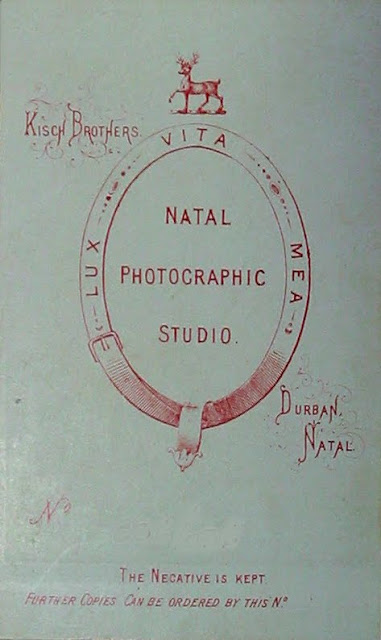 A plain tradeplate for Kisch Brothers 'Natal Photographic Studio' in Durban. The Latin tag Lux Vita Mea: Light is my Life is a possible translation. The corners of this carte are not rounded, and information is kept to a minimum, yet it looks to be a fairly early one, perhaps the first decade of the 1870s.

Henry opened his own studio in Durban, The Cosmopolitan. This was a separate entity from the studio he ran with Benjamin.

Listed in 1873 are 'Kisch, H and B, photographers and artists, Smith Street'. Durban.

By 1877 Henry Kisch was operating a studio in Longmarket Street, Pietermaritzburg, near the Wesleyan Chapel.  Cartes-de-visites, while still used, were being overtaken by the larger cabinet portrait. Popular was the 'Vignette'  style where the subject, often only head and shoulders, faded into the background without a border between. 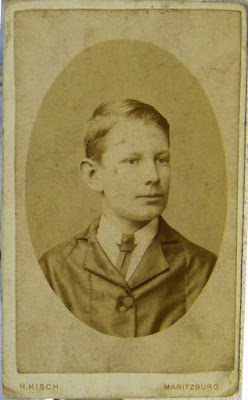 Carte by H Kisch taken in his Pietermaritzburg studio.
The subject is Ernest Bell Pay. 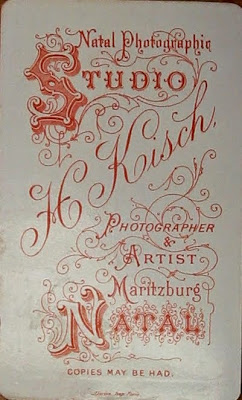 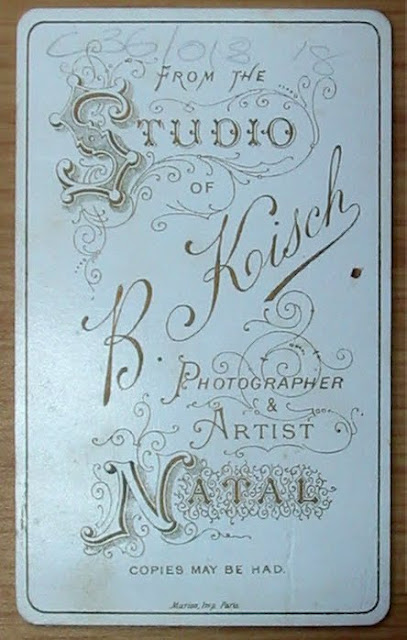 Tradeplate of B Kisch dating from the 1870s.  Note rounded corners of the carte de visite, limited information e.g. no studio location. 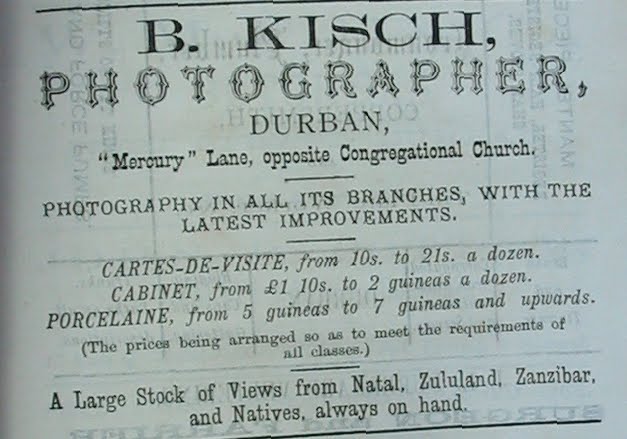 Advert for  Kisch's Mercury Lane Studio from the Natal Almanac 1881 giving prices for cartes-de-visites, cabinet photographs (almost taking over from cartes at this stage) and some photos on 'porcelaine' at higher prices. 'A Large Stock of Views from Natal, Zululand, Zanzibar and Natives, always on hand.' 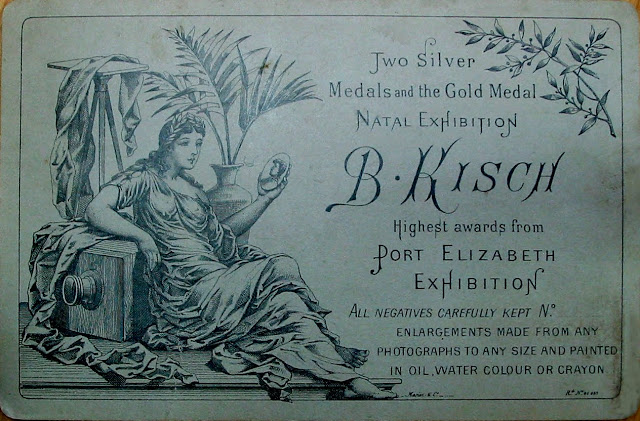 Benjamin Kisch's fame as a photographer grew
and he received several prestigious awards.

The first directory entry of Benjamin Kisch starting a photographic studio is in 1871. But other records show that Benjamin Kisch and a Henry Alexander Grant were in partnership as photographers in Durban by May 1867. By 1872, Benjamin and his brother Henry were working together, Henry being the more mobile partner, while Benjamin remained in Durban. Benjamin and Henry operated as partners until 1875 when Henry went to Pietermaritzburg and this remained his base until he returned to Durban some 10 years later.  By 1895 Henry was a photographer in Ladysmith. He took numerous photographs during the period of the Anglo-Boer War.

There is a deceased estate file in Pretoria Archives for Benjamin Kisch, dated 1889. According to the Natal Almanac, Benjamin was operating from a studio in Mercury Lane Durban from about 1884-1887. Why he died in the Transvaal (where the Death Notice was filed) is not certain. His wife continued to run the studio at Mercury Lane for about seven years, possibly in conjunction with Henry whose address is also given as Mercury Lane in 1888 but Henry's address changes in 1894 to 194 West St.

1885 Henry Kisch returned to Durban (from Pietermaritzburg). This would be during the time Benjamin's sight was starting to fail.
1888 Henry’s address in Natal Almanac is given as Mercury Lane, Durban. That
was the address of Benjamin's studio from at least 1881.
1889 Benjamin died - his wife took over the business, some help provided by
Henry.

The tradeplate, or the back of the printed photo card, was at first plain and simple. Then as photographers learned more about their art it became obvious that this space was ideal for advertising the name and location of the photographic studio. Gradually the tradeplate became more and more decorative. The children in the carte-de-visite below are members of the Dore family, William and Walter. They look rather hot in their outfits. Kisch clearly favoured the trellis background which appears in several of his portraits. 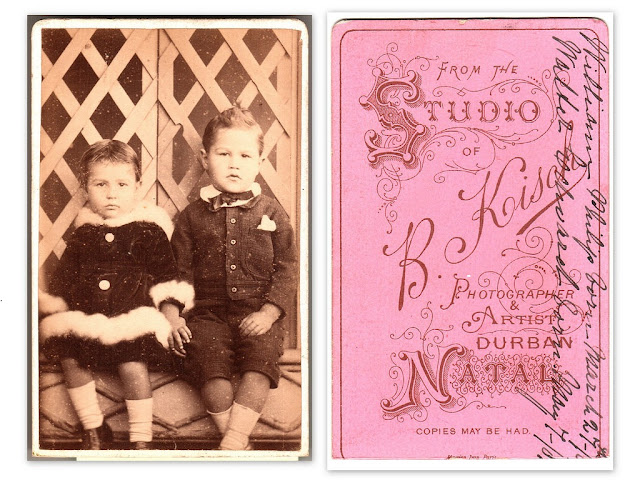 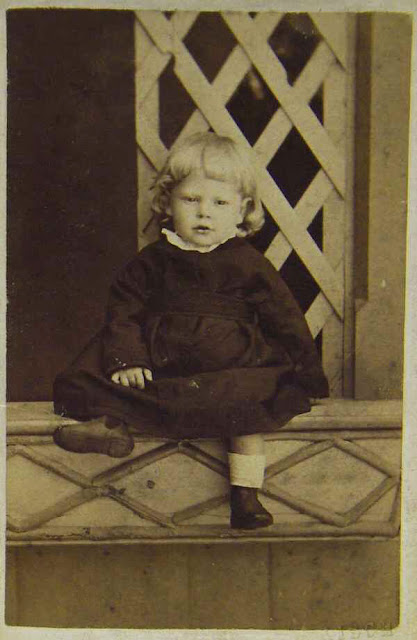 Ernest Bell Pay b 1875*. He is still wearing skirts – boys were usually ‘breeched’ at the age of four so he may be about 3 or 4 years old in this photograph taken, therefore, circa 1878/79. He has elastic-sided boots with socks turned over the tops; his garment is of a durable fabric such as serge, somewhat warm for the Natal sub-tropical climate, and a touch of white frill shows at the high neckline relieving the sombre colour. Ernest’s hair falls into natural curls.

The photographer has taken care in positioning his subject, the attractive Natal colonial-style lattice work behind and wooden diamond-shaped bamboo embellishment below providing a decorative frame though not detracting from the main focus of the picture. The date of 1878/9 fits in with the plainness of the mount, which has rounded corners and is blank on the back: the value of the space on the reverse of the carte for advertising purposes had yet to be considered. An impressed stamp, ‘KISCH’, is hardly visible at the bottom right of the carte de visite.

In 1878/9 Benjamin Kisch was operating his Durban studio without the help of his brother Henry, also a photographer, who had moved to Pmb in 1875. At the date this photo was taken - and until 1880 - Benjamin Kisch worked from his studio in Smith Street ‘opposite the Durban Club’; previously advertised as ‘Kisch Bros’ now ‘Benjamin Kisch, photographer and artist’. In 1881 he moved to premises in Mercury Lane, Durban, ‘opposite the Congregational Church’. 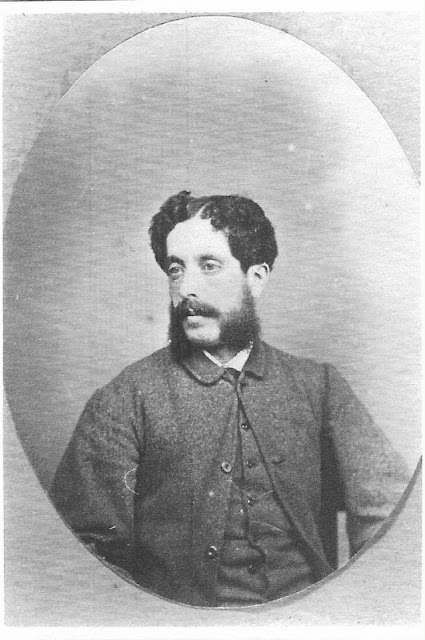 My great great grandfather was Benjamin Kisch, born in 1842 in Wisbech, Cambridgeshire, who emigrated to Durban and became a professional photographer. He died in 1889 in Pretoria.

Benjamin was the brother of Daniel Montague Kisch, founder of the law firm D M Kisch and of (David) Henry Kisch, born 1848 in Norwich.

According to Dorian Kisch, the wife of one of Henry's descendants, Benjamin and Henry were in business together in Durban / Pietermaritzburg and family legend has it that they lost the business because Benjamin had medical problems (his sight) and all the family money was spent trying to get him cured.  Our side of the family's version of the story is that after Benjamin Kisch died his wife continued the business for a while before selling up in the 1890’s.

Benjamin Kisch covered the Zulu War extensively, and many well known images of that period are his. Among them is a portrait of the Prince Imperial which he took when the latter was in Durban prior to getting himself killed in the Zulu war. Family tradition is extremely strong that our Ben was a photographer and an important figure in Natal.  The Prince Imperial fracas is a famous story - he was the son of Napoleon III and Princess Eugenie, who lived in England for a long time (after being thrown out of France in 1870). His death during a minor patrol caused a huge diplomatic row at the time. Benjamin died in the 1880's and his wife, Alice Lester Baker (who was from Durban, they married in 1871), continued the business for a while, but eventually sold it.  She moved to England in about 1919, presumably to be near her daughter Elaine, and died there around 1930. She's buried somewhere in London.

It wouldn't be unusual for a man who later became a photographer to have started off in some other line of business, as Benjamin Kisch did, and because few of the early photographers could make a living solely from photography many continued a dual career. In 1875 Benjamin Kisch had an outfitter's shop in Durban.

There is some confusion as to whether the Natal Kisch brothers, Benjamin and Henry, were linked to two men in the Cape, Braham Kisch and his son Tiberius Benjamin Kisch.

Dr. Braham Kisch was of an old Anglo-Jewish family and came to SA in the 1830s; in 1837 he became licensed as an apothecary in the Cape and was later District Surgeon in Colesberg; he died 30 Nov 1877 in Vereeniging where he was then practising as a medical practitioner.

Braham's first wife was Cornelia Neser; their son Tiberias Benjamin Kisch was born in Colesberg in 1840. (He was named after his maternal grandfather Tiberias Neser.) Shortly after the death of Cornelia, young Tiberias Benjamin was taken to Scotland where he was educated and became interested in photography. On his return to the Cape, he set up as General Dealer and Auctioneer in Colesberg in 1862; the following year he opened a photographic studio and combined this work with other business interests until May 1870 when he went to the Diamond Fields. He returned to Colesberg after 8 months, but was at the diggings again in March 1871 where he apparently played an important part in the discovery of the Colesberg Kopje. He was back in Colesberg at the end of 1871, then in Feb 1872 went to Port Elizabeth, where for three years he was a Commission, Customs and Forwarding Agent. 1875 saw him in Cape Town, where in July 1880 he became Manager of the City Tramway Company. By 1889 he was a boarding house keeper in Orange Street. He died in 1913. Tiberias Benjamin is said to have introduced the carte-de-visite type of photograph to Colesberg and is also said to have been the first recorded photographer to advertise this style of photography in Bloemfontein (March 1864).

From the above information (for which the source is mainly Secure the Shadow by Bull & Denfield pub 1970) it is clear that neither Braham nor Tiberias Benjamin Kisch operated in Natal as photographers. There is no certainty that they were related to Benjamin and Harry who worked in Natal. 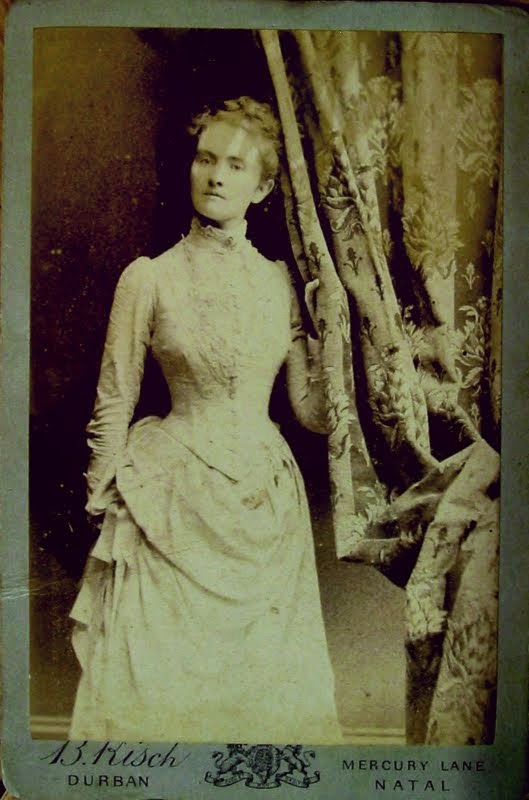 In 1863 B Kisch and Co were listed in the Natal Almanac as Grocers and General Dealers in Ladysmith. Kisch and Wilkinson appear in the Almanac as General Merchants and Provision Dealers of West Street Durban.

Benjamin Kisch operated a photographic studio in Durban from the 1870s. He and Henry Alexander Grant were in partnership there by 1867.

By 1872 Kisch and his brother Henry were working together. Henry travelled about taking photographs, many during the period of the Anglo-Boer War, and contributed all the photos for a valuable history of the Siege of Ladysmith. Henry then settled in Pietermaritzburg returning to Durban ten years later.

Benjamin remained in Durban, taking photographs of a high quality, some hand-coloured, and many of local celebrities including Sir Garnet Wolseley. Perhaps his most famous portrait was that of the Prince Imperial. Benjamin died in 1889 leaving an insolvent estate. His widow kept his studio going for seven years afterwards.

The photograph above was taken by Benjamin in the Mercury Lane studio during the 1880s.

Some confusion exists in various publications re Benjamin being the brother of Braham Kisch, a commercial photographer who was Cape-based. This relationship is incorrect and Braham Kisch never operated a studio in Durban. 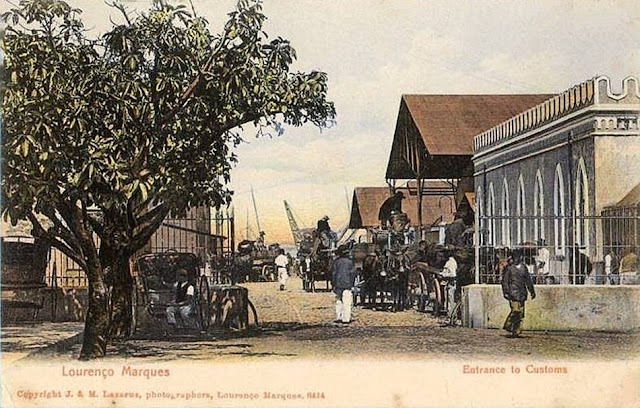 Postcard of Lourenco Marques ca 1900s from photograph by J and M Lazarus.

If you have any information on the brothers Lazarus please notify Mole.