On 18 June 1830, the brig Thorne, bound for Table Bay, put in at what was then called ‘Plettenburg’s Bay’ in distress, having suffered ‘considerable damage in her upper works’. The report in the South African Commercial Advertiser mentioned that those on board were in ‘a miserable condition’ but were given assistance by Captain Harker (of Plettenburg’s Bay) whose ‘humanity and kindness’ were highly commended.

Severe weather prevailed along the coast that month, for another vessel, the Usk, arrived in Algoa Bay on 20 June, without her stern-boat and divots; part of her bulwarks had also been carried away.

About a year later the Thorne, a frequent visitor to Table Bay, was wrecked at Robben Island. (We’ll return to her story in due course.)

These incidents and numerous total wrecks are a reminder that the southern coastal waters off Africa could be extremely perilous and though the voyages between ports might be of relatively short duration, mariners needed skill and experience to avoid disaster. Passengers required courage to venture on board sailing vessels of 100 tons or less. Sometimes a successful arrival at a destination was accomplished more by guess than by God, as shown in the circumstances described below. 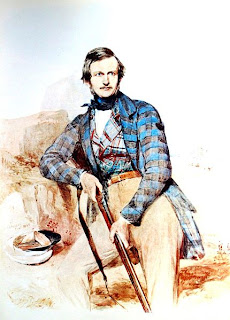 The hunter and traveller William Cornwallis Harris in 1836-37 undertook a ten month expedition from the Cape into the interior and later recorded that he and his companion William Richardson:


'... embarked on 2 July in a small schooner bound for Algoa Bay, one of our fellow-passengers from India accompanying us to the pier, unable to persuade himself, until the boat had fairly pushed off, that we really intended to venture upon a second voyage in such a craft so immediately after the troubles we had undergone. In addition to a mate, a cook, and a Mozambique negro … our crew consisted of three men and a boy; our fellow passengers being two adventurers who occupied the berth opposite to our own in the only cabin, and a tailor with his wife and nine daughters, some marriageable, others at the breast. This unfortunate family, every member of which was sea-sick during the whole voyage, located themselves in the steerage, an apartment about eight feet square, ventilated only by the hatch way.

The passage up the coast at that season seldom occupies more than three days, but the fates decreeing that our progress should still be opposed, adverse winds had taken the place of the north-wester, which had been blowing without intermission during the preceding six weeks, and which, had it but continued a day longer, would have wafted us to our destination. 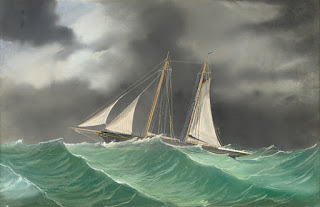 The little vessel was usually gunwale under. Stormy seas breaking over her obliged the tailor to seal up his family hermetically; heavy lurches during the night ejected us from our narrow precincts, and more than once brought my companion and myself into awkward and violent collision, whilst the rolling during the day repeatedly swept the table and deposited the viands in our laps.

Being the whole time within sight of land, no observations were taken, and on the afternoon of the eighth day we entered St Francis’ Bay, in mistake for that of Algoa, not discovering our error until we were about to let go the anchor. The tailor, who had made the voyage before, courageously ascended the mast-head … to make an attempt at recognition and regaining the deck gravely assured us that we were in Plettenburg’s Bay, nearly 2 degrees to the westward.  The chart was produced, and being satisfied that we were close to Cape Recif [sic], a dangerous reef of rocks, we advised the ship to be hove to …. but we contrived to weather the point and having narrowly escaped foundering on the Bird Islands floundered into the harbour of Port Elizabeth’. (i.e. Algoa Bay)


[Extract from Cornwallis Harris’s volume, initially entitled Narrative of an expedition into Southern Africa during the years 1836, and 1837, from the Cape of Good Hope through the territories of the chief Moselekatse, to the Tropic of Capricorn etc.,  later known, more simply, as Wild Sports of Southern Africa. The first edition was illustrated with 26 plates of the author’s beautiful paintings of the local fauna.]