Keeper of the Bluff Light: Thomas Alfred Gadsden in Natal


For a new article, Keeper of the Bluff Light, on a permanent page on this blog, follow the link below:

Souvenir Saturday: Shrubsole in Natal: a marine artist at work

Labels: Paintings of the Bay of Natal, Shrubsole

It is hereby notified for the information of those whom it may concern, that the following Emmigrants have arrived by the Eudora:- 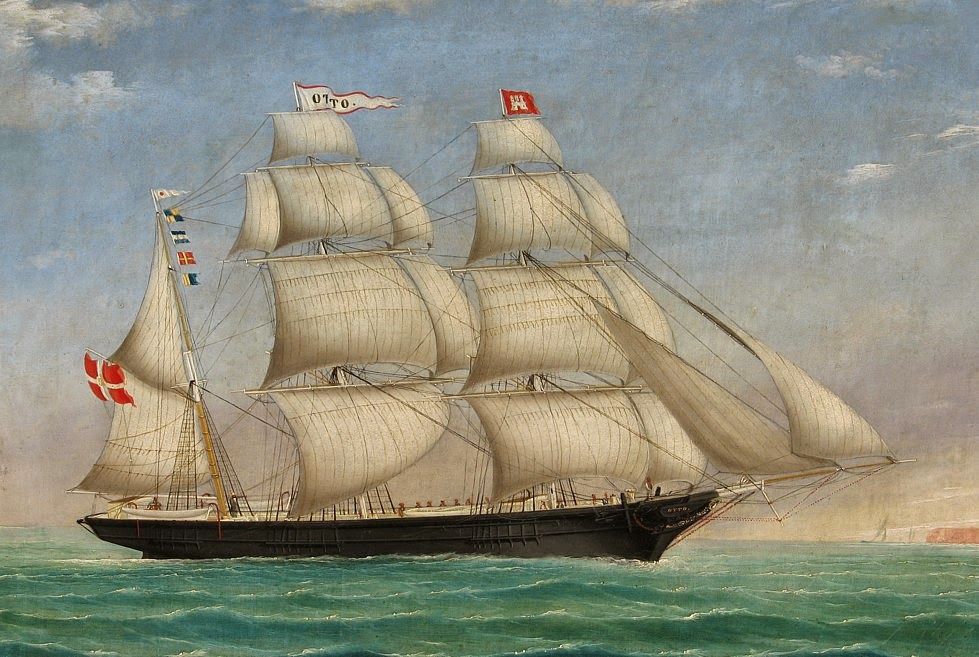 Maritime Adventures of the Anglo-Zulu War 1879

After the battle of Isandhlwana 1879 British reinforcements were urgently required in South Africa but there was as yet no cable communication between England and the Cape (this was established in 1880) by which news of the catastrophic defeat by the Zulus could be sent immediately to Britain.

One of Donald Currie's steamers, the Dunrobin Castle was about to leave Table Bay on her homeward run and her planned departure was put forward so that she sailed at 7.30 p.m., 27 January 1879, headed at full speed for St. Vincent, which was then the limit of the Western Telegraph. From there the news of Isandhlwana was cabled to London, its publication causing a sensation on 11 February.

This voyage of the Dunrobin was turned to good account by Currie, who subsequently instructed that another of the Castle steamers, the Conway Castle which was then outward bound, should also put in at St Vincent. By the time the vessel reached St Vincent, the military authorities had been informed and the Conway was able to pick up dispatches with the latest information about the many reinforcements about to leave for South Africa. This news being directly transmitted to the forces in Natal had a major impact on the course of the war. The garrison which was besieged at Eshowe was deterred from making the planned desperate attempt to break out and fight its way through the Zulu lines to the Tugela River. It was as a result of the services rendered by Donald Currie in connection with the war that the head of the Castle Line was later given a knighthood. Currie's opposition, the Union Line, also played its part in the conflict. The Pretoria had returned to England after her first voyage when news of Isandhlwana reached London. The vessel was immediately taken into dry-dock, where alterations were carried out so that she could carry troops. A new propeller was fitted, and coal and stores taken on board - all in the remarkably short space of nine days. On 20 February she set out for Natal, carrying the 91st Highlanders (Princess Louise's Argyllshire Highlanders), and making the run in the record time of 24 days 8 hours. The landing of the Kilties is said to have given rise to a perception among the Zulus that the British were sending women to fight.


Underlining the rivalry between the two great steamer companies, Captain WC Crutchley relates in his autobiography My Life at Sea (published London 1912) how the coaster African on which he was serving was in Table Bay at the crucial moment. Crutchley was at his club in Cape Town late one night in January 1879, when the rumour was received of a British defeat at Isandhlwana. The captain realised that troops then in Cape Town would be required post-haste at the front, and also knew that Currie steamers were in port and would, if given the chance, convey the necessary reinforcements to Natal. The Union Company offices were closed at that time of night, there was of course no telephone and it was impossible to contact any of the company's officials. Crutchley, undeterred, took it upon himself to go to Government House and the Castle, offering the services of his vessel in transporting troops. The African was made ready and troops embarked within hours for Port Natal. Arriving a few days later, the coaster landed the reinforcements and also her own 12-pounder, which was later used in the defence of the Pinetown laager outside Durban.
Posted by Mole at 1:12 AM No comments:


ROBERT BROWN, SUNNY SOUTH AND NATAL STAR Natal Mercury April 9 1867 with mention of the loss of the schooner Wasp at Table Bay with all hands 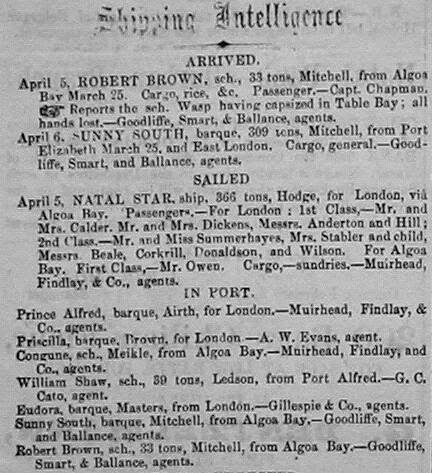 
The William Shaw, 39 tons, was built at Cato Creek in August 1856, for George Cato (Mayor of Durban). Named after a Wesleyan minister, she was the first ship to have Port Natal painted on her stern as port of registry. This schooner was launched prematurely when the Umgeni River came down in spate.

Report
Sailed from Delagoa Bay Jan 24, experienced a very heavy thunder storm from 3 p.m. until midnight, afterwards a gale from SW. Masaken's people went to attack the Matola, but returned after capturing two women, whom they afterwards killed. Fever very prevalent. The Portuguese brig Tigo, Captain Olivario, in port, with the Matola chief and Secretaries on board as prisoners, for Mozambique.
GC Cato, agent. 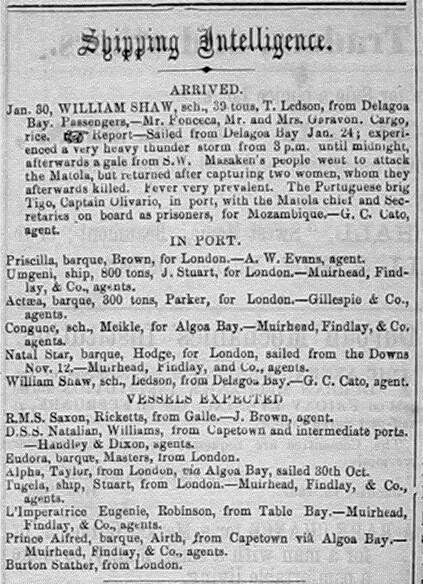