Wreck of the Annabella at Durban 1856 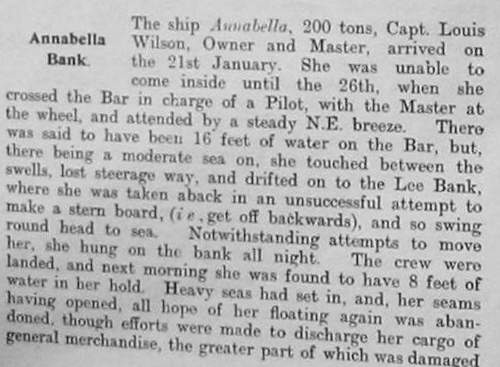 The Annabella, 200 tons, was a British-built barque wrecked on Annabella Bank - named after the ship - on 21 January 1856 at Durban. No lives were lost.

Her story emphasises the difficulties encountered by ships entering the harbour and having to wait until conditions of wind and weather, and particularly the depth of water over the Bar, were suitable for a safe landing.

As Port Captain, William Bell was involved in assisting at many such wrecks and their aftermath, reporting on causes of the incidents and sitting at the inquiries held.


By the late 19th c tugs were used to help vessels in and out of the harbour. Also there were various attempts made by marine engineers to improve access to the Bay by dredging, building piers and other schemes, not all of them successful. 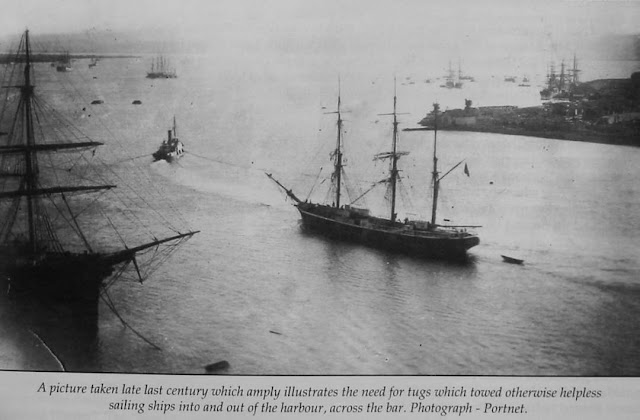 Is Your Ancestor listed here in 1878? 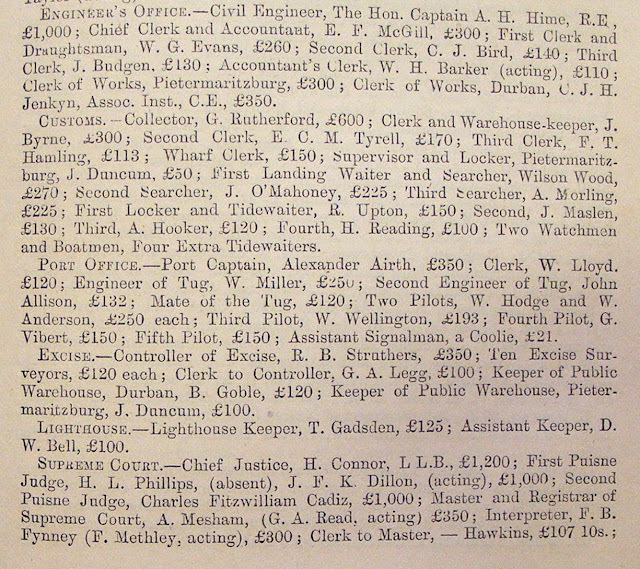 The Natal Almanac and Yearly Directory is a mine of information on the Port and Town of Durban in the late 19th c. This entry tell us that T (Thomas) Gadsden was Lighthouse Keeper with a salary of 125 pounds per annum. His brother-in-law Douglas William Bell was Assistant Keeper at 100 pounds. At the time, the Port Captain was Alexander Airth. (Captain William Bell had died in 1869.) Gadsden was married to Captain Bell's daughter Eliza Ann.

Customs and Excise staff are also listed, as well as those in the Engineer's Office.

Is your ancestor listed? 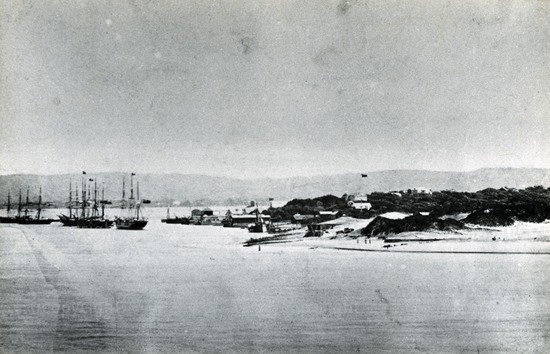 Durban Point and Bay in the 1870s, with the Berea dimly
outlined in the distance.

Cape Shipping 1829 including Conch under Cobern 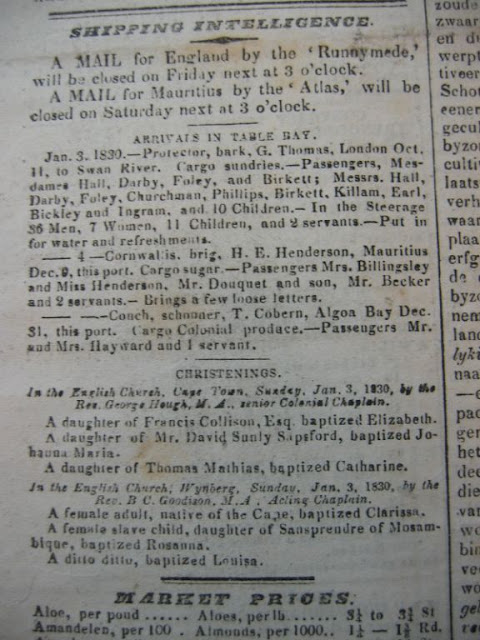 The schooner Conch was making regular sailings carrying colonial produce and passengers between Algoa Bay and Table Bay, and other ports, before William Bell took over her command. Here she is under another master, Cobern, variously given as 'J' and 'T' but probably the same person. Extract from SACA 31 Dec 1829. 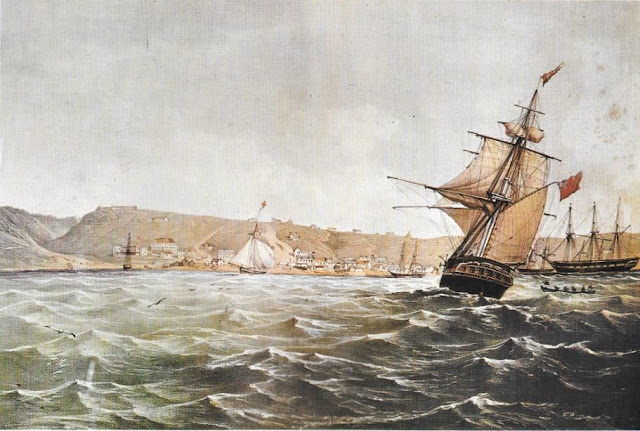 Ships in Algoa Bay in the 1820s, by Thomas Baines

Captain William Bell of the Conch: death of his daughter in 1844 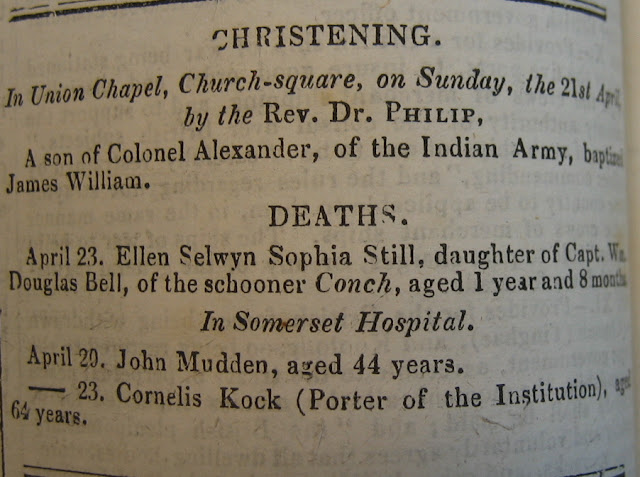 From the South African Commercial Advertiser 27 April 1844: the death, on 23 April, of Ellen Selwyn Sophia Still, aged 1 year and 8 months, daughter of Captain William Douglas Bell 'of the schooner Conch'. It must have been a low point for Bell and his family. At this juncture, after his heroic part in the action at Port Natal in 1842, Bell had returned to the relatively quiet life of a coastal mariner, commanding the Conch, and based at Algoa Bay, making regular sailings to and from Table Bay and other ports.

That people had not forgotten his courageous act in taking British troops into land at Natal under enemy fire had been evidenced by one particular letter which appeared in the local press in November 1843. This and other efforts by the public on Bell's behalf eventually led to an offer by the colonial government of a post as 'Harbour Master' at Natal. But the course would not be plain-sailing.

This child, born shortly after Bell's return to Algoa Bay in July 1842, had been given the middle name of Selwyn - after Major Selwyn who had played an important part in events at Natal in June of that year. Sadly Ellen was to die very young. A Bell daughter born subsequently in May 1846 would be named Ellen Harriet. By that date the Bells had their eldest daughter, Mary Ann Elizabeth Pamela, b 1839, and their first son, Douglas William, b 1841.

Bell of the Conch - a lesser-known photograph ca 1850s, with telescope 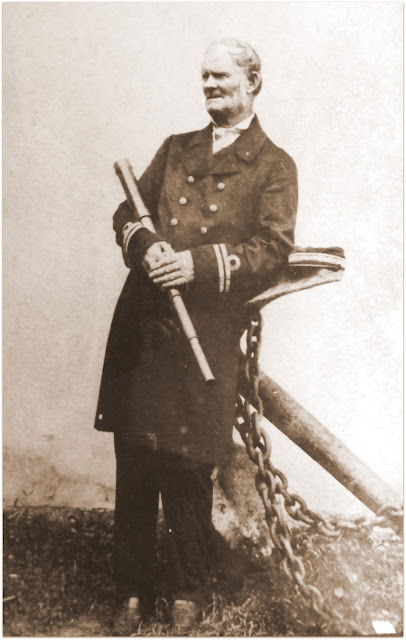 This is not the widely-known photograph of Bell taken some years later but it is taken
on the same spot, with the same anchor, and he is wearing the 'uniform' though not with epaulettes on the shoulders as shown in the famous photo. The picture probably dates to the 1850s. He is holding the Dollond brass telescope, still in the possession of one of his descendants. Bell was never in the Royal Navy and the nautical jacket he wears may have been made to his own design. 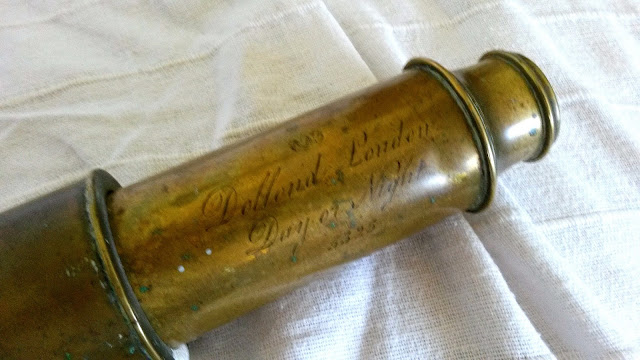 The Dollond Telescope belonging to Bell and bearing the maker's name,
and 'London', and 'Day and Night'. This instrument was in Bell's possession throughout his life.
(Photo by Caz Collins, Bell descendant)

John Dollond FRS (10 June 1706 – 30 November 1761) was an English optician, known for his successful optics business and his patenting and commercialization of achromatic doublets (for telescoeps). In 1752 he joined his eldest son, Peter Dollond (1730–1820), who in 1750 had started in business as a maker of optical instruments; this business is now Dollond and Aitchison. His reputation grew rapidly, and in 1761 he was appointed optician to the king. 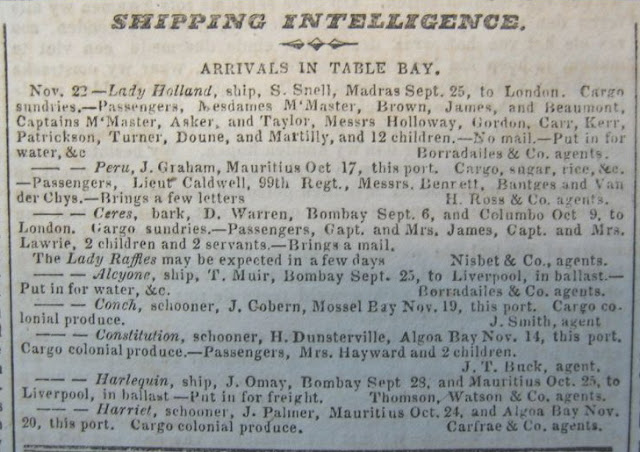 Conch is noted as then under command of 'J' (should be 'T') Cobern, agent J Smith (later to be William Bell's agent). The schooner had been on a regular run to Mossel Bay and was arriving back in Table Bay on 19 November with a cargo of colonial produce. 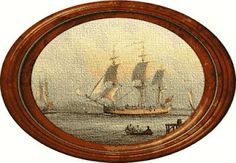 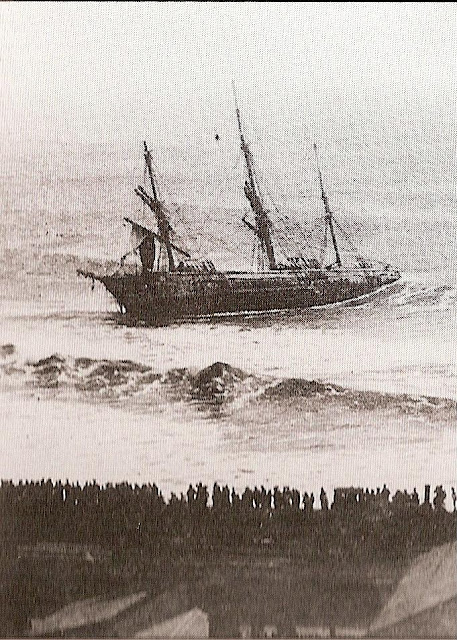 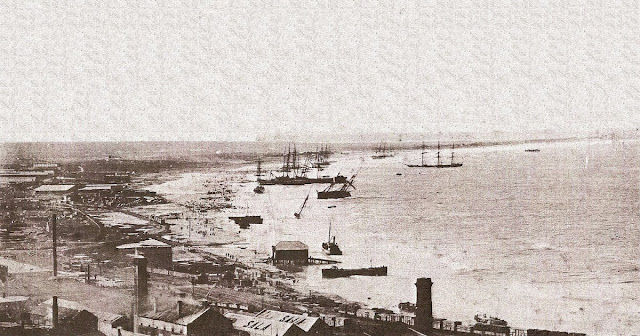 During a south-east gale, nine vessels were wrecked on the North End beach. The ships were: 'Andreas Riis', 'Dorthea' [sic], 'Wolseley', 'Drei Emmas', 'Elizabeth Stevens', 'Jane Harvey', 'Lada', 'Natal', and 'C. Boschetto'. The Rocket Brigade, life-boat and crews of other ships assisted and only one drowning was recorded. 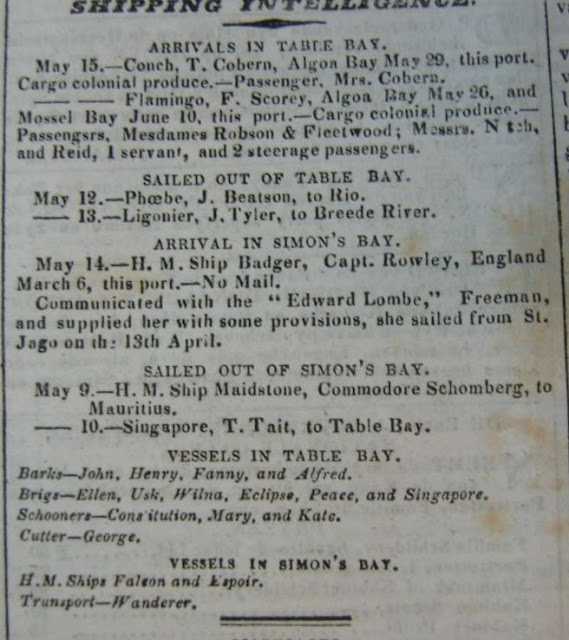 This report from the South African Commercial Advertiser shows the Conch arriving at Table Bay under command of Cobern - with the Captain's wife on board as passenger, from Algoa Bay on 15 May. The date of departure from Algoa Bay is given as 29 May which must be an error unless the Conch was into time travel.
The Flamingo date of departure is also dubious, unless like Cobern he was travelling backwards. Interestingly the latter vessel is commanded by Scorey (note error - his initial should be J not F) - who would later become a relative, by marriage, of Captain Bell. There was an intriguing group of Cape mariners operating in coastal waters at this period, all linked either by agent or by personal ties and of course acquainted with one another. A small world which Bell would soon join. 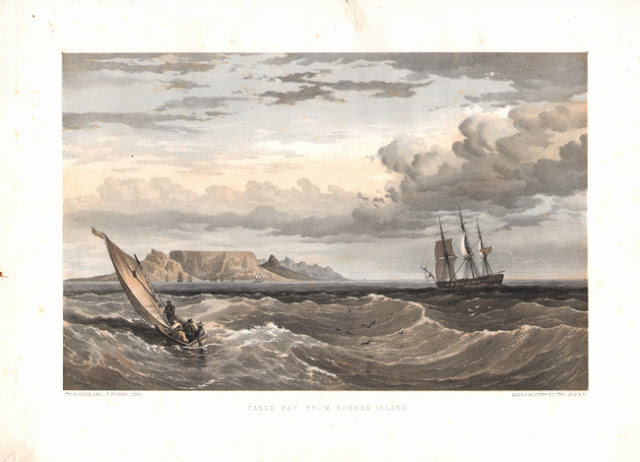 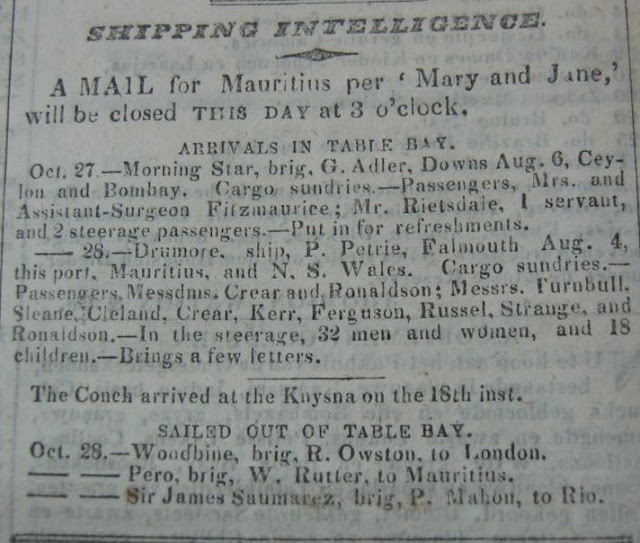 Apparently a routine visit of the Conch to the small port of Knysna was deemed worthy of mention in the shipping columns - no captain is given, but it would have been too early for Bell so perhaps Humble or Bosworth was in command. Interesting to note that the ship Drumore, which had departed Falmouth on 4 August, brought 32 men and women and 18 children, none of them named (as was usually the case for steerage) - you can lose a lot of ancestors like that ...  These steerage passengers were likely on their way to New South Wales, not remaining in South Africa. A chance to track their progress via the Cape is lost to descendants because of the lack of identification. 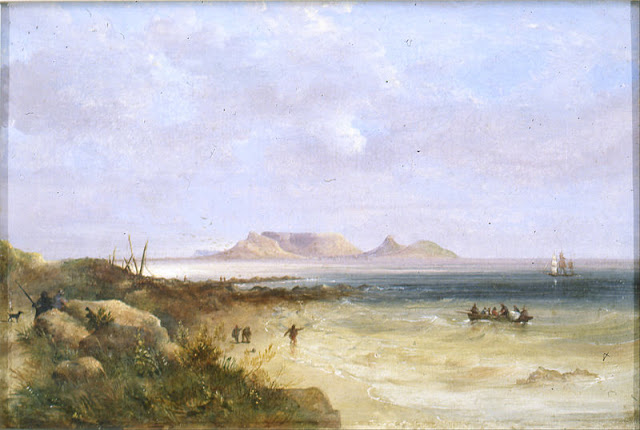 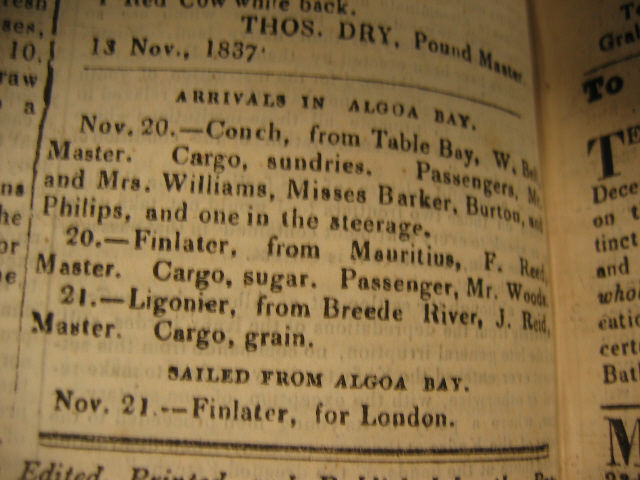 A snippet from the Grahamstown Journal November 1837 shows W Bell in command of the Conch, and sailing between Table Bay and Algoa Bay, carrying passengers as well as cargo. From this year Bell and Conch were firmly riveted together. It would be five years before the big events of 1842 at Port Natal completely changed Bell's life. 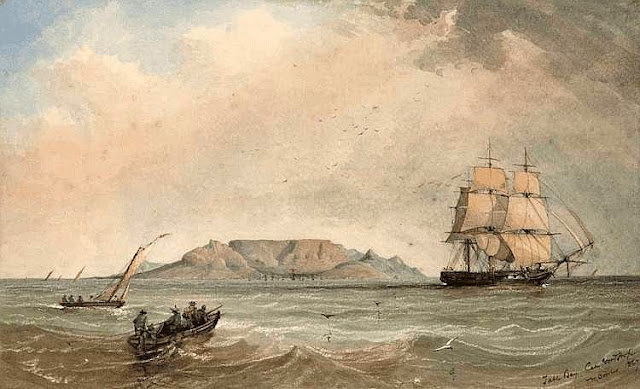 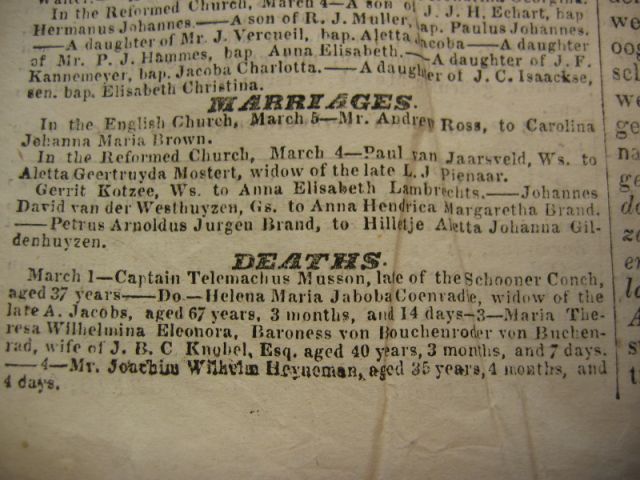 South African Commercial Advertiser 10 March 1827 announces the death of Captain Telemachus Musson 'late of the Schooner Conch' aged 37 years. This was ten years prior to the start of regular sailings of the Conch under Captain William Bell. What happened to young Captain Musson we don't know, but the Conch was busily employed in Cape coastal waters under a variety of masters before Bell took command.


1st mention in South African Commercial Advertiser 1 April 1837 of Bell as captain of Conch. There is an earlier reference in the Cape Government Gazette in January of that year. 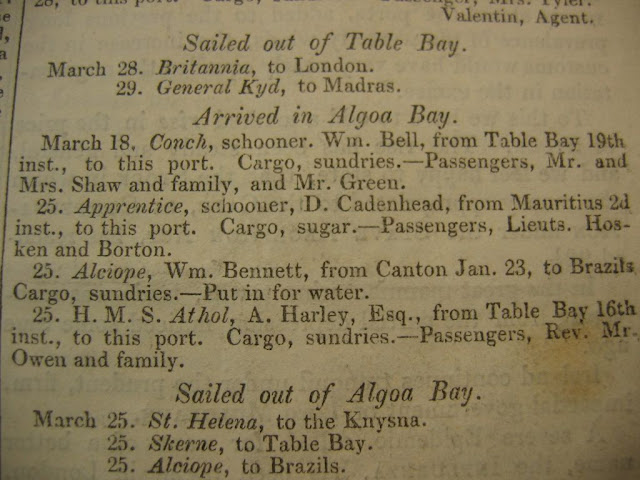 ACCIDENT.  Before the Schooner Conch got under weigh on the 20th ult. in Algoa Bay, a brass gun was fired for the purpose of warning the Passengers to embark, when unfortunately the gun burst, and severely wounded the seaman who fired the gun.  He was immediately taken on shore, and it was found necessary to amputate one of his legs, but he expired on the following day.

Note: Captain Bell was not in command of Conch on that ghastly occasion.  Thorne, on which Bell was reported to be serving as '2nd officer' in 1831, went aground on 18 May of that year. 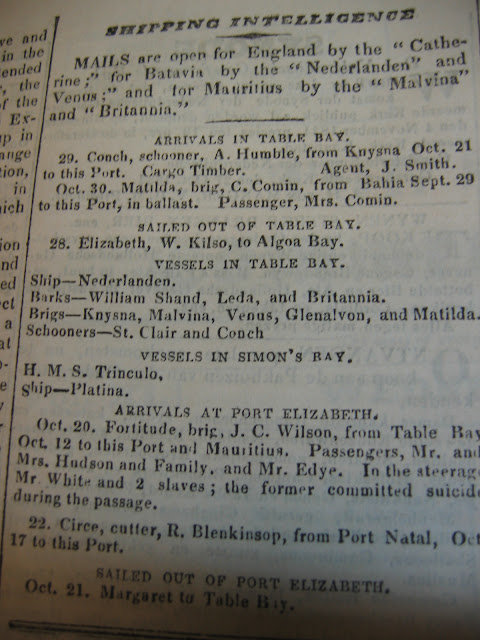 Conch,  A Humble Master,  Knysna to Table Bay. In the mention of the brig Fortitude's arrival at Port Elizabeth under J C Wilson, note 'in the steerage Mr White and 2 slaves' - the unfortunate Mr White committed suicide during the passage.
This report appeared in the Cape press in October 1835. Captain Humble shared a ship agent with Bell i.e. J Smith. George Cato was also one of this stable.