A Voice from the Past

Recently I was lucky enough to find a notebook containing family history notes and a partial narrative written by my mother (Cathrine Gibson Gadsden, nee Hamilton). This had remained hidden among other less interesting documents since her death some years ago. There's no doubt that the writings were intended for me. Reading the pages, which are closely-clovered with her beautiful script, it was as if we were having a chat - and a very informative chat it was, too. My mother lists all her father's siblings (born in Stevenston, Ayrshire, Scotland), mentioning who they married (accompanied by a pithy description if the spouse wasn't all he/she might have been), and what offspring they produced. In conjunction with her 'bible' (her address book), I'm now able to work out who the descendants are and where they might be found - spread from Scotland to England, some in South Africa, others in Canada and US.

I've learnt that an unmarried great-aunt, far from being the guid Scots home-body I'd imagined, was manageress of her department at Rattrays, a huge wholesale company in Glasgow. It was a surprise to find that my Hamilton great grandmother had given birth to 17 children - according to the Census she had only 13 'born alive', and of these 'reared' 12. Still, a full household. I'd never realised that, before he emigrated to South Africa, one of the great-uncles had been in the Merchant Navy during World War I: another avenue to explore. Great Gran apparently used to buy from the mobile fishmonger a 'two-eyed steak '- i.e. herring - and would make 'Tatties with their jackets on' for lunch.

Facts and accurate dates are essential ingredients for any family narrative, but when they come with a pinch of fond memory the flavour is so much sweeter. 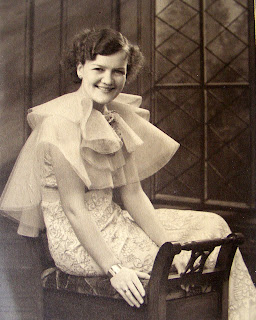 A Gadsdon by any other name ... 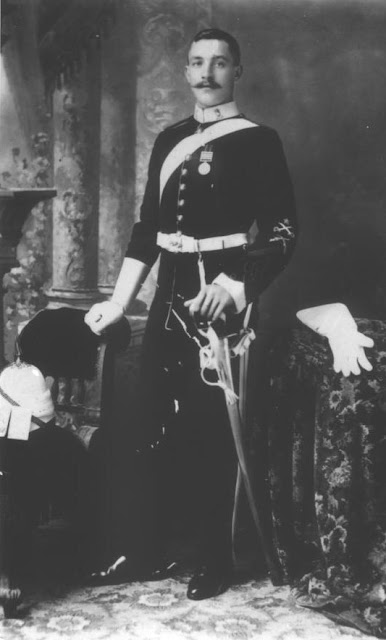 George Stephen Gadsdon (later changed his name to Leader) as a dashing young officer in the 6th Dragoon Guards, the emblems on the sleeve of his uniform indicating his prowess at marksmanship and swordplay.  He was also a boxer of note.

Though he spent a great deal of time in the army, George seems not to have taken readily to authority: he was court-martialled four times for various offences, including being in possession of a stolen pistol and for being drunk on the frontline in France, allowing a prisoner in his care to escape. On another occasion, he objected vehemently to what he considered an inappropriate order by a commanding officer on board ship, when repatriating prisoners after World War I. He had applied in 1916 to join the 'special services' transporting detainees back to their counry of origin, making his application under yet another name - George Ford.

There's an obvious lesson here for family historians: an ancestor could take on several new identities, making it more difficult to track down every phase of his career. When George emigrated to Australia he changed his surname to Leader. There he worked on a site building the Burrinjuk Dam as well as on the railroad in 1914. By the start of World War I he was an Australian citizen and may have enlisted under the name Leader. He was then about 33 and apparently unmarried. It was while recuperating in hospital after suffering the effects of mustard gas (in France) that he met his wife, Emily Toovey, who was a nurse.
Posted by Mole at 11:22 AM No comments:

Down Memory Lane In a Rickshaw

Two uniformed passengers take a rickshaw ride at Durban, Natal, South Africa, during World War I. One of the Australian soldiers depicted - he is seated on the right hand side of the rickshaw - is George Stephen GADSDON (aka George Stephen LEADER, 1882-1933).

Born in Islington, London, in 1882, George Stephen Gadsdon lied about his age to get into the Royal Warwickshire Regiment: he was 15 at the time but stated he was 18. This circumstance led to his being discharged from the Regiment a month after he enlisted. He then joined the 6th Dragoon Guards, saw action in the Anglo-Boer War in South Africa and later went to Australia where he changed his surname to LEADER.

He survived several major battles of World War I including Ypres: his battalion (2nd Australian) lost 90% of their number at Gallipoli. George was wounded twice during his military career and also suffered the effects of mustard gas in France from which he never fully recovered. When George was reported Missing in Action at one stage of the Great War, his wife was asked if he had any distinguishing marks: she replied, 'A Union Jack tattooed across his chest.' 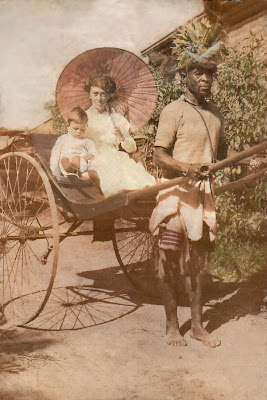 The word rickshaw (sometimes spelled ricksha) stems from the Japanese jinrikisha﻿ meaning literally 'man strength vehicle'. It was introduced in Japan ca 1870; by the 1880s the word was anglicised and shortened. Rickshaws became a popular tourist attraction in Durban from the 1890s. Today their numbers have dwindled but it is still possible to take a rickshaw ride along Durban's Golden Mile (the beachfront). 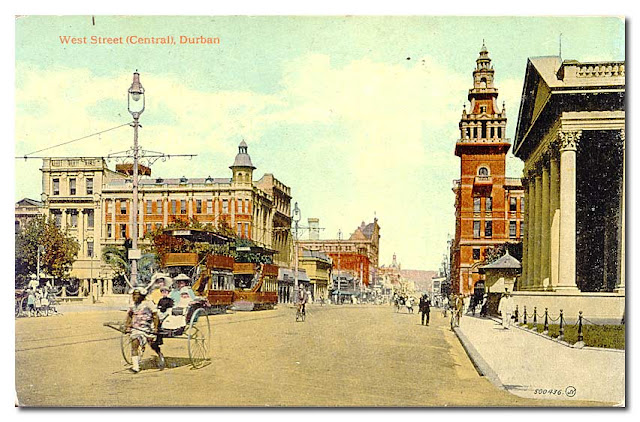