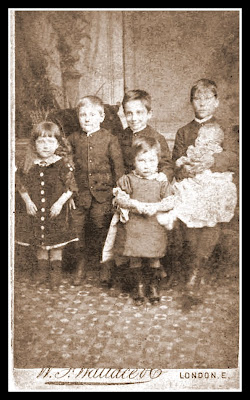 ‘The Six Gems’: children of James Colquhoun Bell and grandchildren of Capt William Bell. Precisely which children are shown in the group is at present open to conjecture.

James Colquhoun Snr’s birthplace is given as and his occupation as Marine Enameller (painting work done on ships so he was in the right place at ). His wife Sarah (nee Clark) was born in Blackfriars, ca 1851. (They married in September 1874 at St Mary Stratford, Bow.)

Their two eldest sons, William Caithness Bell and Alfred Douglas Bell were elsewhere for the 1891 Census. The children listed are James Colquhoun Bell Jnr, b 1880 in Aldgate, London, Hester (Adelaide), b 1882, Henry (Job) b 1883, Ellen b 1884 (these three all born at Mile End Old Town, London), Victor b 1886 at West Ham, and Frederick, a year old, born in South Shields. The years of birth as given in the Census entry are slightly out in some cases, e.g. Hester Adelaide was born in August 1881.