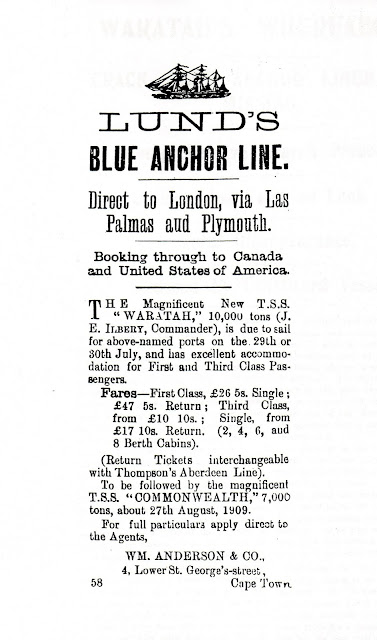 On her departure from Durban Harbour on Monday, 26th July, at 8.00 pm, SS Waratah put to sea for the last time.  As she turned south past Durban Bluff, headed for Cape Town, the scene was now set, for one of the greatest, tragic sea mysteries of all time, to be played out.  Little did anyone imagine that she was destined to vanish within the next 24 hours!

Captain Ilbery and his crew knew a heavy southerly storm was blowing up from the Cape and they would soon be confronted by enormous seas. This stretch of the South African coastline is notorious and treacherous, taking merchant ships close to the very edge of the Continental Shelf, which generates gigantic swells, especially when very strong winds blowing from the south-west, oppose the 3 knot south-running coastal current.

The following morning of 27th July had the ship progressively heading into stronger winds. Waratah‘s last communication from Latitude 31.36 degrees South and Longitude 29.58 degrees East, positioned her due east of Cape Hermes, near the town of Port St. Johns.  Down this coast, abnormal waves are at their worst. Facing this hazard, the question remains - had she tried to come about to return to Durban and broached, or had she continued further down the coast, to be lost with all hands?

During the passage from Adelaide, (Australia) to Durban, the Waratah had not been well-received by many passengers when moderate to rough seas had manifested in her top-heavy promenade deck being the cause of her insecure righting motion.  Would Captain Ilbery and his senior officers have felt apprehensive in anticipation of this wild storm ahead of them?
Did that underlying unease amongst some of the crew and passengers start to increase now, as they recalled the recent Adelaide passage and the disagreeable way in which the Waratah had rolled, remaining on her sides for a long time before recovering?  Little did any of them imagine that they were sailing directly to their deaths!

Where and when, exactly, did Waratah meet her demise?

Most haunting of all is how the passengers and crew would have faced their terrifying imminent doom.  They would have been hurled about the ship as she hit the enormous waves and possibly rolled over completely. Perhaps she was engulfed by an enormous rogue wave as she drove down into a trough.  We can only hope that their demise was quick, with perhaps no time to realise what was happening, before the thousands of tons of icy water poured over the ship to drag them helplessly into the depths of the Indian Ocean’s Continental Shelf.

Now, many years later, in looking back at all the possible outcomes and the human tragedy that occurred, speculation persists, questions continue to be asked with doubts raised and searches will continue.  We have been left to draw our own conclusions on what actually happened to the SS Waratah that night and where she, her Captain and the passengers and crew might rest in their ocean grave.

Psalm 107:23-31
They that go down to the sea in ships, that do business in great waters;
These see the works of the Lord, and his wonders of the deep.

This guest post was written by Suzanne-Jo Leff Patterson - thank you Sue for your passionate interest and on-going research into the Waratah!

From Ocean Steamers Wharf for the Indian Ocean crossing to Durban, South Africa.

The weather report issued for South Australia at 9 pm on 6 July 1909 was, ‘Cloudy, generally with rain and squally winds between NW and SW, strong on the coast and rough sea.’  Captain Ilbery had taken on 6 new crew members in Adelaide and as the 14 new passengers embarked their fate was sealed and destiny was closing in on them.

That Wednesday, in a ghostly drizzle as the tug guided the SS Waratah from the wharf, no-one on board would have had the slightest notion of the impending doom that awaited them much further into their voyage.

Winter had come to the Southern Hemisphere, storms at sea were now commonplace for shipping in these lower latitudes and much heavy weather was expected.  It had already been noted by some passengers that soon after leaving Adelaide the weather had become rough, as forecast, and it seemed that the Waratah rolled in a very disagreeable way, remaining for a long time on her side before recovering. While she was recovering and the deck became horizontal, she often gave a decided jerk.

As the voyage continued, an underlying unease grew amongst some passengers regarding the Waratah’s design, with her high promenade deck, instability due to the design and slow righting movements of the ship.


However, none of the passengers would ever have imagined that this ship would vanish so completely without trace on that fateful night of 27 July 1909……… 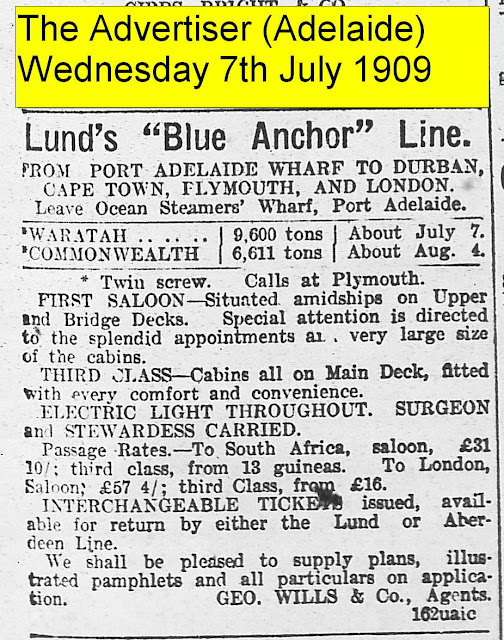 Acknowledgement to Susanne-Jo Leff Patterson
Posted by Mole at 8:11 AM 1 comment:

The Waratah begins her fateful voyage 108 years ago 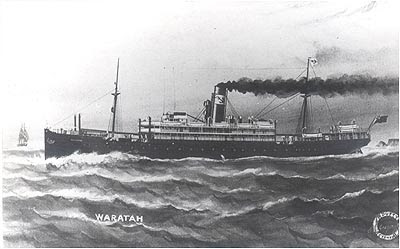 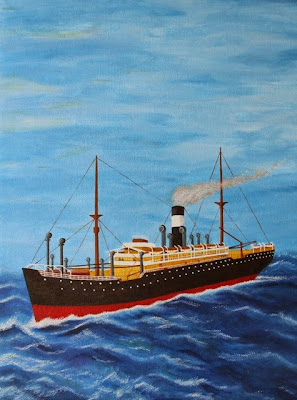 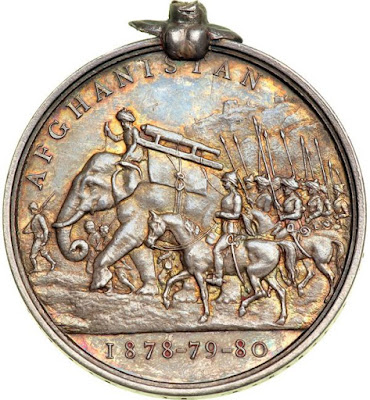 Finley (or Finlay) Gibson, 1841 - 1924, was entitled to the Afghan Campaign Medal, seen above,  as he served in that conflict. My great grandfather, he was in the 15th Hussars from attestation at the age of 18 years in 1859 to his discharge at the age of nearly 40 in 1880. His papers indicate that he intended residing at Stevenston in Ayrshire, though he was a Londoner by birth (birthplace St George's,  Borough, East London, England).
The reason would become clear. I discovered that living in that Scottish village was his  widowed sister, Margaret McIntyre, with her children. Finley and his brother, William, also a soldier, both made their home with Margaret for a while. Finley married Annie Bell in Stevenston in May 1881 and started his own family. By 1911 he was Foreman of the Dynamite Factory at Ardeer, known locally as the 'dinnamit'. Several of his children worked in the factory - a dangerous environment as explosions could, and did, occur. 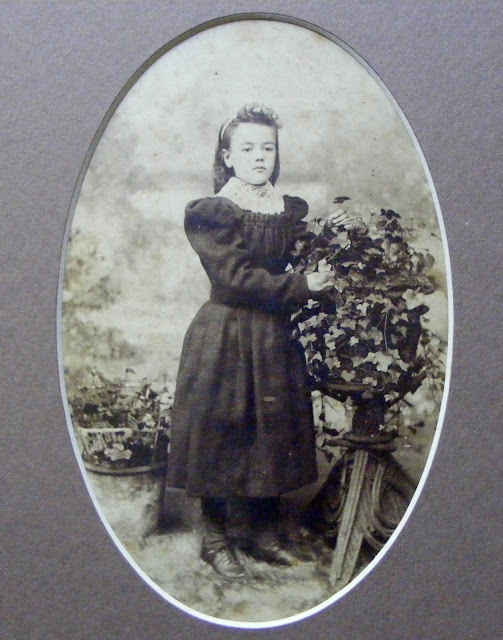