When the Children’s Friend Society (CFS) started sending child emigrants to the in 1833, the Colony had been under British rule for almost thirty years. However, retained many characteristics of the preceding era when the Dutch had held sway.

A major port visited by ships from all over the world, the streets thronged with a mix of nationalities, including indigenous races. Large-scale British immigration hadn’t begun until 1820 and there was some tension between the Dutch and the new influx of British settlers. The 1830s were turbulent years for the Colony. The emancipation of slaves resulted in an economic down-turn. Early in the decade, Dutch farmers (trekboers), resistant to the British administration, began moving away into the interior (the Great Trek). There was also a perpetual state of war between native tribes and colonists on the eastern frontier. Into this melting pot the young CFS emigrants were thrown, willy-nilly.

Some of the children were apprenticed to masters who were merchants, hotel-keepers or tradesmen in . Most apprentices went to the rural districts. A large proportion ended up working for Dutch families and had to learn to speak Dutch, a factor which the CFS hadn’t considered. Many indentured children lost their ability to speak English.
The apprentices were from an urban environment and weren’t suited to farming life, though there were advantages in placing them far from the temptations of . Boys taken on by farmers were given the task of herding animals or other duties previously performed by slaves or coloured servants, rather than learning a specific trade which would enable them to support themselves after their period of indenture.

Such menial tasks gave rise to the perception that the children were ‘replacements’ for slaves. This erroneous impression was accentuated by the fee which masters were required to pay to cover costs of the emigrant’s passage to the : it appeared as if the children were being ‘sold’ rather than apprenticed. In a colony where ownership of slaves had previously been the norm, masters did not readily understand the nature and obligation of the indenture contract. One boy’s employer, who gave up the baking trade and became a travelling hawker in the interior, left the apprentice behind at Paarl to fend for himself for months.

Another difficulty was that the children were generally unable to practise their own religion, frequently because farms were at some distance from an English church. The emigrants therefore either didn’t go to church at all, or attended services held in the Dutch denomination. To the CFS, that the children should have religious instruction in English as well as access to places of worship ‘of their choice’, was fundamental – though the children had probably had a basinful of Bible thumping. With the financial aid of the Society for the Propagation of the Gospel, a powerful missionary arm of the Anglican Church, a minister, Rev J W Saunders, was sent out to the in 1838 in an attempt to amend the situation. 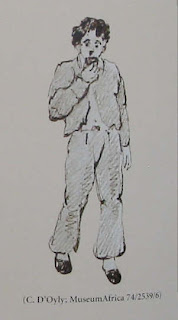 How isolated the child emigrant must have felt, thousands of miles from home, adjusting to a strange environment, with letters – few and far-between - the only means of contact with family and friends. Some of the children were surprisingly literate, others had either never learned to read and write or had forgotten these skills while in the Colony. Often they had to rely on finding someone who could write their letters for them, but in a Dutch household there may have been nobody able to write in English.


For apprentices on outlying farms, a letter would have to be carried by ox-wagon or by someone making the journey on horseback to Cape Town, several days or more distant, and then await the next ship departing for England on a voyage which would take three months. In the interim there was a good chance that the relative to whom the letter was addressed had moved, or died. Similarly, a family member in might wait months or even years for news of the indentured emigrant. Inevitably this impacted on family ties and increased the emigrant's feeling of isolation.