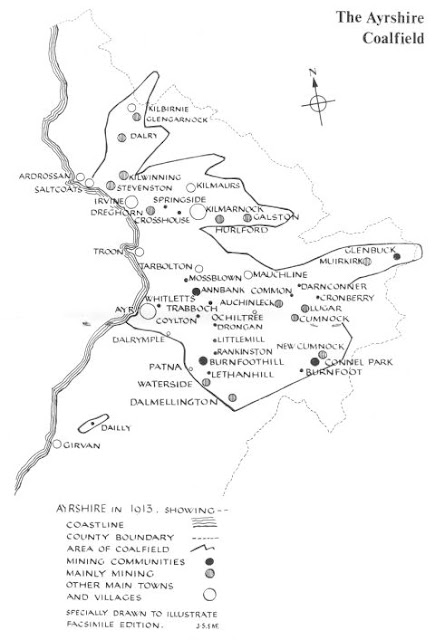 The place names shown in the above map occur frequently in the story of the Hamilton family of Stevenston. There's Dalry, where William was born, Stevenston where so many Hamilton events occurred, and Ayr where the Burns Museum can be visited.
Posted by Mole at 8:01 AM No comments: 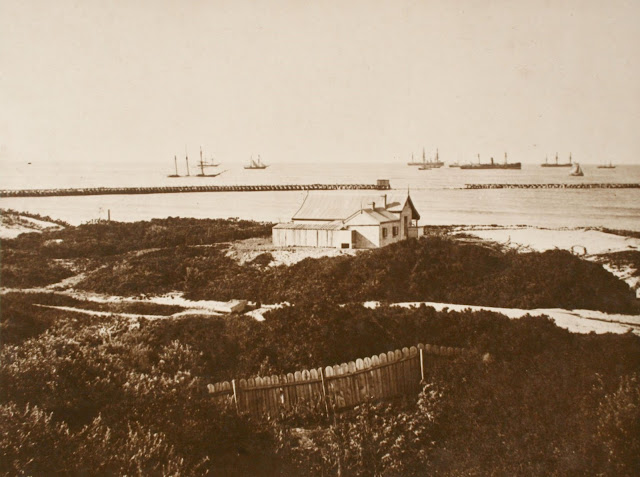 Having attempted various measures to improve access to Durban harbour, such as Milne's scheme in the 1850s, the Colonial Office threw its hands in the air and turned the entire matter over to Captain James Vetch, a Royal Engineer in the harbour department at the Admiralty. Vetch saw possibilities in designing something special for Natal. What is incomprehensible is that he did so without ever leaving his desk in London and had never visited Natal at any stage. The upshot was that after further expenditure the development of the port was no farther advanced when Vetch's contract was terminated.

Acknowledgement: African Keyport, Capt. Tony Pearson
Posted by Mole at 9:49 AM No comments: 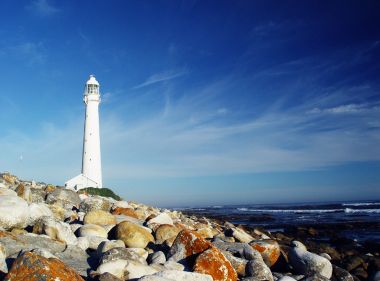 Slangkop Point lighthouse, part of the Marine Protected Area of Table Mountain National Park, is a 34m-high giant of a lighthouse that has become the icon of Kommetjie. Visitors walking the 8km stretch of Noordhoek Beach often climb up to the top of the lighthouse for stunning coastal views.
The tallest tower on the South African coast was established after the lighthouse commission of 1906, but it wasn't until 1913 that tenders were invited for the supply of a cast-iron tower, lantern, optical apparatus etc. It had been intended to be put up by 1914, but the Great War intervened and though the lighthouse was built by that year it had to wait five years to be commissioned.
The cost of the original installation was 14 358.9.1. pounds.
The lighthouse is now fully automatic but a senior lightkeeper is retained on the premises for security reasons.

In 1914 the Senior Lightkeeper was J C Luxton, T F Addison taking over about 1918. Others in the earlier years were J Piper, A Small, H C Grieve, R W Gardiner.
J F Hannabus (see other posts on this lightkeeping family) was First Lightkeeper at Slangkop from 1963 - 1965, and C H Hannabus preceded him from 1929 - 1930. Other surnames associated with this lighthouse include: Bissel, Andreason, Linden, Stewart, Bruyns, Harty, and van Rensburg (F, 1970-1975).
Posted by Mole at 7:35 AM No comments: 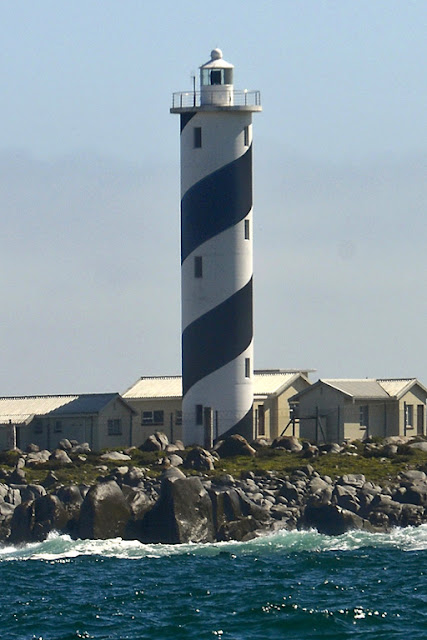 The first North Head Lighthouse on the northern side of the Saldanha Bay entrance, in South Africa, was a 300mm AGA acetylene gas lantern mounted on a square concrete pillar, installed on December 7, 1939. It had a small diaphone fog signal.

As the harbour began receiving larger vessels in the export of iron-ore, it became important to upgrade the lighthouse.

In 1969 it became an electrical lighthouse on a steel lattice three-panelled pedestal, virtually identical to its sister lighthouse, the South Head. Since August 2005 a concrete tower that stands 21 metres high, painted in white and black diagonal stripes dominates the seascape. The steel lattice is still there but diminished in stature by the new concrete version. The new look is more in keeping with the 'idea' of lighthouses people have in their mind's eye.

The official vessels' arrival line for Saldanha Bay is the straight line connecting the centres of the two lighthouses - North Head and South Head. Should a boat of any description cross this line, it is considered to have 'arrived' within the bay.

Seen from a little way down the coast, the lighthouse is particularly striking, perched as it appears to be right on the very rocks that are daunting to ships, the old lighthouse still visible slightly behind it. Today the lighthouse is fully automated and monitored at Cape Columbine lighthouse. It lies within the property of the Saldanha naval base and a nature trail takes one past it. 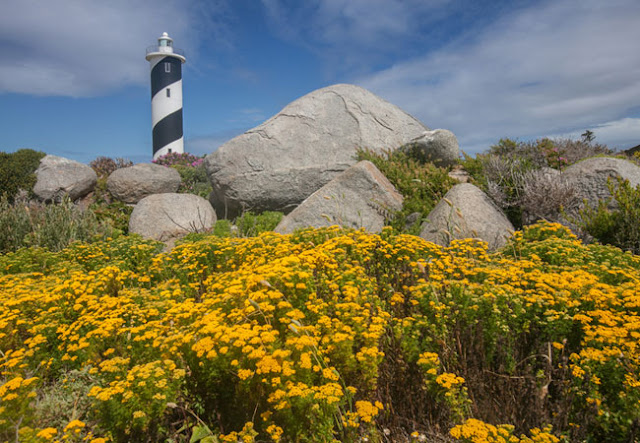 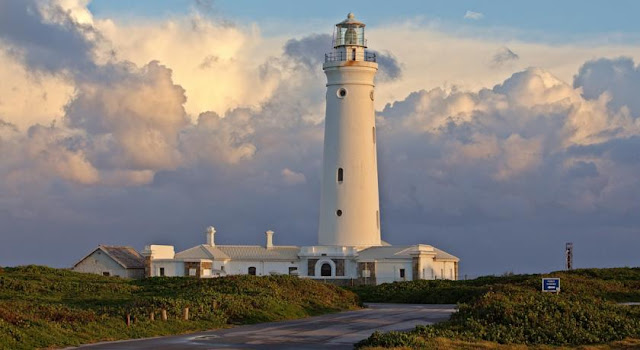 It has been in operation since 1878 and was declared a national monument in 1984. The circular lighthouse is equipped with a lantern house and second-order revolving lantern that has eight catadioptric lens panels. 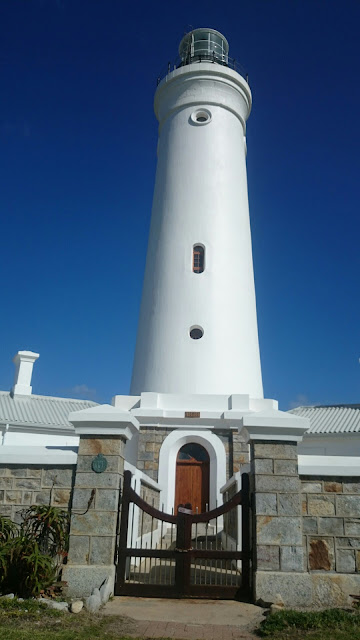