The Cape committee submitted annual reports to the CFS in , and in 1836 and 1837 the feedback was good: the scheme appeared to be working satisfactorily. During the period 1833-1839, about 800 children were sent to the Colony. However, a combination of the factors mentioned above was undermining the scheme and would eventually threaten the very existence of the Society. The catalyst was as unexpected as it was disastrous.

On 2 April 1839, The Times reported an incident in concerning ‘a shabbily dressed boy, about twelve years of age’ who was brought before the Marylebone magistrate ‘on a charge of having stolen a purse containing some halfpence belonging to a poor woman who keeps an apple-stall in the ’. The boy gave a false name: his real name was discovered to be Edward Trubshaw. He proceeded to tell the court that he had been sent out to the , by the ‘Juvenile Society’ (the CFS). He stated: ‘I was half-starved and knocked about shameful. They sold me, and a good many more’. The magistrate exclaimed, ‘Sold you! What do you mean? Apprenticed you, I suppose?’ ‘No Sir’ said the boy, not apprenticed, they sold me … to a Dutchman who came and looked at a lot of us … he bought me for 10 guineas.’ Trubshaw had later run away from his master and had worked his way back to by ship.

The press pounced on the suggestion that children ‘were being disposed of like so many sheep at ’. Reports of the case created a major sensation, and complaints against the CFS with accusations of slave-dealing and cruelty, flooded in. The Society tried valiantly to defend itself, but the power of the press was all too apparent. People known to be patrons of the CFS were attacked in the street and stones were thrown at members of the committee. 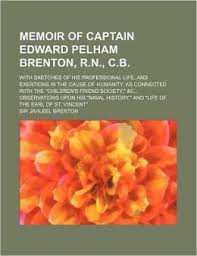 Captain Brenton, aghast, saw the impending ruin of all his efforts. As the storm raged around him, he became seriously ill and died on 6 April 1839. It was rumoured that he’d taken poison, but an inquest returned a verdict of death by natural causes related to a heart condition. On the day of his funeral, a woman among the crowd shouted that ‘under the pretence of benevolence he had been dealing in slaves’: the unkindest cut of all.

INQUIRY
The CFS South African scheme was doomed. A Government inquiry was set up to investigate the condition and treatment of the children sent to the . Though largely vindicated by the report which followed the Society lost public support in and there was a reluctance in the to receive further indentured children.

The Governor of the Cape, Sir George Napier, remarked in February 1840, that ‘although deeply regretting that an institution which promised well has been overthrown, as regards the Cape of Good Hope, by the evident disposition … on the part of many persons in England to pay implicit belief to every foolish report or misrepresentation to its discredit, I cannot but hope that the colony will be spared the pain of encountering any further inquiry through the continued operation of the Children’s Friend Society’.

The motives of the CFS in sending the child emigrants to the were sincere, but the Society lacked awareness of colonial conditions. Moreover, they assumed that employers in the Colony would share the CFS ideal of moral upliftment of the children. Most employers regarded their apprentices simply as useful labour in a time of shortage of that commodity.

The 1840 Report revealed few genuine cases of corporal punishment by masters, and the majority of the children interviewed made no complaint of ill-treatment. Most of those who stated their wish to return to felt that they weren’t learning a proper trade in the Colony. The artisan apprentices working for carpenters, masons, blacksmiths, wagonmakers etc had better prospects than the indentured farm labourers.

Although the scheme ground to a halt, largely due to prejudice and the emotive topic of slavery, the child emigrants were given an opportunity to change their circumstances, and some chose to remain in the Colony after their apprenticeship was over. Among 69 apprentices whose indentures had expired by 1840, 41 boys and 12 girls were still living in the Colony and were self-supporting; some of the girls had married.

Despite the failure of the CFS at the , the concept was later adapted for other successful child emigrant schemes. In 1858 about 50 children were sent to from . By that time, influenced by the CFS experience, the laws governing indentured labour at the had been modified.

As for the boy Edward Trubshaw, whose allegations had precipitated the crisis which brought the CFS to its knees in 1839, he continued his inglorious career and was later sentenced to transportation from for theft.