RMS Titanic was a British passenger liner that sank in the North Atlantic Ocean in the early morning of 15 April 1912, after colliding with an iceberg during her maiden voyage from Southampton to New York City.

I asked for ice, but this is ridiculoussaid John Jacob Astor IV, according to legend ... 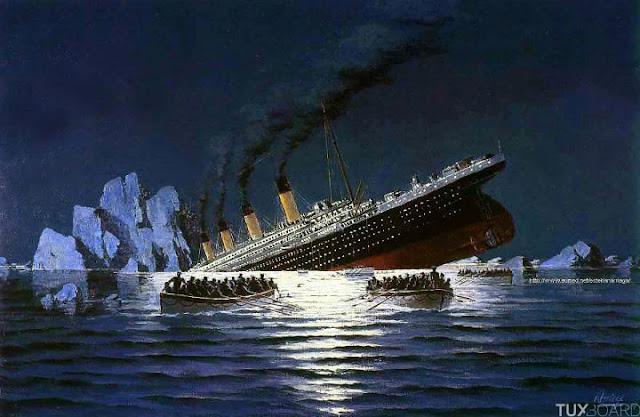 1. The RMS Titanic was the world’s largest passenger ship when it entered service, measuring 269 metres (882 feet) in length, and the largest man-made moving object on Earth. The largest passenger vessel is now Harmony of the Seas, at 362.12 metres.
2. The ship burned around 600 tonnes of coal a day – hand shovelled into its furnaces by a team of 176 men. Almost 100 tonnes of ash were ejected into the sea every 24 hours.
3. The ship's interiors were loosely inspired by those at the Ritz Hotel in London. Facilities on board included a gym, pool, Turkish bath, a kennel for first class dogs, and a squash court. It even had its own on board newspaper – the Atlantic Daily Bulletin.
4. There were 20,000 bottles of beer on board, 1,500 bottles of wine and 8,000 cigars – all for the use of first-class passengers.
5. The Grand Staircase on board descended down seven of the ship’s 10 decks and featured oak panelling, bronze cherubs and paintings. Replicas can be found at the Titanic Museum  in Branson, Missouri.
6. The staircase at the White Swan Hotel in Alnwick, contains banisters from the Grand Staircase of the Titanic’s sister ship, the Olympic. They are presumed to have been identical.
7. Only 16 wooden lifeboats and four collapsible boats were carried, enough to accommodate 1,178 people. That's only one-third of Titanic's total capacity, but more than legally required.
8. There were 246 injuries and two deaths recorded during the ship’s 26-month construction in Belfast.
9. Twenty horses were required to carry the main anchor.
10. 100,000 people turned up to see the ship’s launch on May 31, 1911.