Contrary to what is widely supposed, though the child emigrants were all from disadvantaged backgrounds, not all of them were orphans. Some had either one or both parents still living, or other relatives. According to the Society’s regulations, the consent of the child was obtained before emigration; this also applied to the consent of parents or guardians. There were complaints later that a few children had been sent overseas without parental consent. Whether these claims were true or not, it is unlikely that the CFS would have risked undermining its public image in this way and inviting the downfall of its scheme.

Most of the juveniles came from parish workhouses. Some were taken out of prisons such as Coldbath Fields and Newgate, but child emigrants were not sent to the as part of a criminal sentence. During their period of training efforts were made to reform the boys and girls and to inculcate good Christian habits. An account of a typical day in the life of the Society’s young inmates prior to emigration shows that they were allowed little time simply to be children: 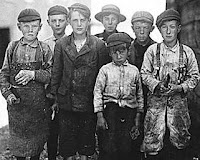 A whistle woke the boys at 5.45 a.m.; they washed and dressed; there was a 6.15 roll call followed by inspection, scripture reading and prayers; from 7.15 to 8 a.m. they attended school – the commandments, reading, spelling and writing. At 8.00 breakfast, eaten in silence, continued until 8.45 a.m.  From 9 a.m. to noon they were working in the fields. Dinner was at 1 p.m., followed by library or playtime (carefully supervised to ensure there was no gambling) until 2 p.m. They worked in the fields till 5 p.m. Tea was from 6 to 6.15, then further studies – maths, reading and spelling. Afterwards there was another roll call, then more scripture, prayers, and bed at 8.30 p.m. A long day: the boys must have tumbled gratefully into their hammocks.

The girls’ regimen was equally gruelling, though directed towards feminine pursuits under Brenton’s dictum, ‘The Bible and the spade for the boy, the Bible, broom and needle for the girl’: equality of the sexes wasn’t high on his list of priorities. At Chiswick, where there were 55 girls in 1835, they were taught dairy-keeping, cleaning, laundry, sweeping and scrubbing, laying and clearing tables, and making clothes. They spent three months in the institution before they were considered suitable to emigrate. One ‘very bad girl’ who had previously been in prison was kept at Chiswick for seven months, as she was ‘a thief, and much given to falsehood’. In addition, she ‘bit a piece out of one of her companions’ shoulders’. These imperfections didn’t prevent the biter being sent to the .

Under the terms of the indenture, a weekly sum of 4d (rising to 6d when the child reached the age of 16) was to be paid by the employer, part of it to the apprentice and two thirds into a savings bank for the child’s future benefit. A sum of about seven pounds was also paid by the employer to defray expenses of the voyage from and any incidental charges which arose in the Colony. In theory, this sum was a form of insurance that the apprentice would be well-treated by the employer, and in cases of ill-treatment the indenture would be cancelled, the master losing the services of his apprentice and thereafter never being allowed to take on one of the Society’s children.  In practice, these safeguards weren’t always properly implemented.

Applications for apprentices were made to the treasurer of the CFS commissioners at the and, on the arrival of the emigrants, masters were selected for the children by the commissioners according to the latter’s ‘knowledge of the applicants and description of character and disposition in the boys and girls’. This must have involved some guesswork. Certainly, not all apprentices remained with the masters to whom they were initially indentured.

The commissioners were appointed by the CFS to administer its operation in the Colony from 1834. As increasing numbers of children were sent out, sub-committees were formed at places such as Paarl, Wynberg, Stellenbosch and - evidence that the CFS wished to maintain control of the situation and that the distances between centres proved more of a problem than the Society had envisaged. This is another example of poor colonial reconnaissance on the part of the CFS.

Brenton wrote in September 1833 after the departure of the Bolton for : ‘When we took leave of the party, 55 in number [all boys], I shall never forget the three hearty cheers they gave to the committee …’

It could be that their cheers were occasioned more by excitement at their departure – or perhaps relief at escaping the strange mix of piety and drudgery at the CFS ‘asylum’ - than in appreciation of the Society’s efforts on their behalf. After the rigorous training phase, a three-month sea voyage would be a lark.

The young emigrants had no grasp of geography and the might as well have been another planet for all they knew of that Colony or the future awaiting them there. The CFS, while setting up complex arrangements for the reception, dispersal, and apprenticeship of the children through its commissioners in the Colony, failed to take into account prevailing colonial conditions. Idealism and Reality were set on a collision course.