Aims of the CFS 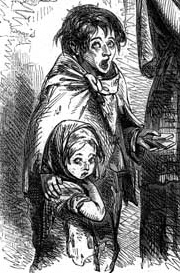 The Children’s Friend Society’s intention was to provide agricultural and other employment to pauper children between the ages of eight and sixteen, estimating that in in 1830 there were not less than 15 000 juveniles who were totally destitute.

Initially, sending the children overseas wasn’t envisaged and Brenton himself was not in favour of that concept. His aim was to remove the children from their disadvantaged backgrounds, to rehabilitate them, provide them with training, and subsequently to indenture them in various occupations until they were able to become industrious, self-supporting citizens in their own country.

Circumstances altered the case. A labour surplus in meant that the CFS had difficulty placing their charges in suitable situations. At the same time, the abolition of slavery in the British colonies in 1833 brought about an acute labour shortage at the . Sending the children to the appeared to be a solution to these problems. It was also in the interests of Empire to increase the British population of the Colony.

In October 1832 the CFS began advertising in the Graham’s Town Journal for masters at the who might require the services of juvenile emigrants as apprentices. At a meeting of the Society the following January, it was decided that twenty of the children then living at the West Ham asylum should be sent to the Cape on the Charles Kerr. According to reports in The Times, these boys were present at the meeting and ‘all held up their hands in favour of emigrating’ (as if they knew what emigrating meant). Half the cost of sending the group to the Colony would be borne by the Government.

The experiment was successfully carried out and Brenton began approaching the Poor Law guardians in various parishes to contribute financial aid towards sending their paupers out to the , The Times announcing in March 1833 that the Parish of St Marylebone had advanced £200. Soon afterwards, a second ship, the Maria, left for (), with another batch of twenty boys.

This pattern continued and public support was indicated by the donations received by the
. In the same year, the Society attracted the attention of the Princess Victoria (she would become Queen in 1837). Under her Royal patronage an institution for female juveniles was established at Chiswick and girls joined the ranks of indentured children being shipped to the .

Victoria visited the Chiswick asylum and recorded her favourable impression in her journal: ‘it is a most interesting and delightful establishment … it is for poor vagrant girls who are received under the age of fifteen and Miss Murray says that they have never had a girl six months who did not become a perfectly good child. When they have become quite good and can read and write and do work of all kinds necessary for the home they are sent abroad … where they are apprenticed and become excellent servants’.

An example of the 'tough love' of the Victorian era: the pious iron fist in the silken sentimental glove. What is the definition of a 'perfectly good child'? One who is forced by circumstance to submit to the power of those in authority and to be 'sent abroad' regardless of personal wishes?

a 'perfectly good child' would probably be one subscribing to the Victorian tenet 'seen but not heard'. In this instance, these children did indeed have no 'voice'. I wonder what parents they in turn made?

Later, their 'voices' were heard in the CFS reports, and continue to reverberate despite time and distance. 'I do not like my mistress,' says young Henry Vine, 'she is constantly boxing my ears'. Mole