Getting the Low-down on SA Passenger Lists

There has been a spate of queries on the knotty topic of passenger lists and how to find ancestors on board ship emigrating – or even just travelling – to South Africa (from Britain or other ports in Europe).

Use the search facility on this blog, entering ‘passenger lists’, or go to ‘passenger lists’ in the Labels cloud (below left on this page), or browse through the archived posts. One or all of these methods should bring you to the relevant posts. 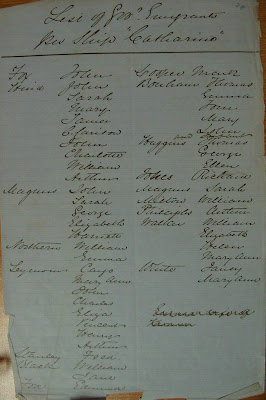 If an ancestor was part of an organized emigration scheme, there’s a good chance of finding out more about him – or about them, if the entire family emigrated together.

If an individual passenger wasn’t part of an organized group but paid for his own passage and was free to settle in whatever part of the country he chose, his arrival is usually less easy to trace. In some cases it may be more sensible to check for a deceased estate file for the ancestor - if he eventually died in South Africa.

Instead, zoom in on what you believe may have been the ancestor’s port of destination: Cape Town? Durban? One of the smaller coastal ports in-between? Much depends on what records are available for these different points of entry. If there is no clue where he might have disembarked or finally settled, you're in for an extended search.

The other important aspect is the date parameter: the narrower the better. Attempting to trace an arrival on the basis of an entire decade is nothing short of masochism.

Generally, the closer we get to the 20th c the more difficult it becomes to find individual passengers. This is partly due to the increase in volume of shipping to South African ports as the turn of the century approached. Record-keeping was inconsistent; newspaper shipping columns couldn’t keep up with all the incoming ships and passengers; port registers that were kept often showed only first- and sometimes second-class passengers’ names; also, not all kept registers have survived.

If your ancestor sailed from Britain to South Africa after 1890, your best bet is the passenger search facility at http://www.ancestorsonboard.com/ powered by findmypast.com

UPDATE 2012:  eGGSA's Passenger List Project is a work in progress: explore what has been done so far at  http://www.eggsa.org/arrivals/eGGSA%20Passenger%20Project.html
Posted by Mole at 4:24 PM

I am trying to find the date my grandmother sailed from UK to South Africa. I believe it was at age of 2 (she was born in 1899) so it could be about 1901. Her birth name was Elizabeth Ann Ivory (but she may have trtavelled as Elizabeth Ann Elliot.

Any help would be appreciated.

Have you tried the passenger lists available on findmypast (ancestorsonboard)? The surname Ivory might be helpful as not that commonly found. Elliot is another matter. You would not be able to find an arrival at the SA end unless you had much more info, like port of arrival, and even then very difficult - by 1900 the volume of shipping had increased, records were not consistently kept, and often only for first class passenger etc. I would suggest you search the departure (these are from the old UK Board of Trade registers) as you have an idea of year plus unusual surname but no guarantee. Sometimes it is poss to whittle it down if a number of possibles emerge.

Thanks for your help and advice.