Marriage in a South African colony

Marriage was a lottery in the colony: a breadwinner might suddenly die of fever, in an accident or as a casualty of war. The woman and her children would more often than not be left in desperate straits. 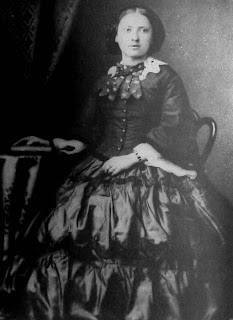 Natal colonist Marianne Churchill (see photo right) had borne six children and was pregnant with her seventh when her husband died after a fall from his horse. Fortunately, Marianne’s brother and his family were also living in Natal and could provide help and support.

When William Dixon Smith died of enteric fever (typhoid) the widowed Charlotte, with three young children by William as well as several older offspring from her first marriage, hired labour to plough her neighbours’ fields on a contract basis.

Because white women were in short supply there was a good chance that a colonial widow would re-marry even if she had children and was only passably good-looking. A trooper of the 45th Regiment in Natal remarked that ‘when the first shipload of emigrants came, the women were worshipped – it was so long since we had seen an Englishwoman we were all off our heads.’ Moreland, Byrne’s agent reported that ‘women are more in requisition’ than men and that ‘a freight of 100 respectable young women would do well.’

The scarcity of women was a problem in most colonies. In February 1850 the Natal Witness newspaper carried the following item:


‘Cargo of Ladies for California … a merchant advertised for 200 young, white, poor and virtuous girls of average prettiness to be taken to California and there honourably married to the thousands of North Americans who, having made their fortunes at the mines, are now anxious to throw themselves at the feet of the first passable specimens of womanhood whom fate and a happy wind may cast upon their shores.’

South Africa also resorted to the expedient of shipping in single women in a bid to redress the balance of the population. It was equally desirable for Britain to offload those who were a burden, and between 1840 and 1870 approximately 50,000 women living in Irish workhouses were given assistance to emigrate to various colonies, mainly to America. A small percentage, however, did undertake the voyage to South Africa, an example (not a particularly successful one) being the women brought out on the ship Lady Kennaway (mentioned elsewhere in this blog).