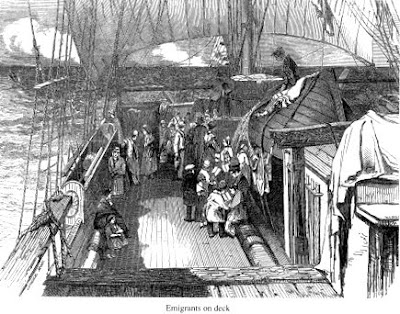 For the period 1891 to 1964, BT 334 at TNA contains Registers and Index of Births, Deaths and Marriages at Sea. These include death registers of the passengers and crew of the Titanic and Lusitania.

The location of a death at sea may be given in latitude and longitude. Other details offered in these records include name, occupation, age or date of birth, address, date and cause of death, and port of registry of the ship.

Passports
I’m often asked about passports as a possible source of information. Before World War I there was no requirement for travellers to obtain a passport when leaving Britain and few emigrants bothered to apply for one. Foreign Office Passport Registers (TNA in FO 610) are indexed by name, giving date of issue and serial number of each passport between 1851 and 1862, and 1874 and 1898. There are registers in chronological order going back to 1795. Passports as we know them didn’t come into being until 1921.

TNA, Kew, has now (March 2010) released records at sea online at http://www.bmdregisters.co.uk/
The records cover over 150, 000 individuals (previously only searchable on microfilm) who were born, married or died on ships between 1854-1908.

Also see on this blog: http://molegenealogy.blogspot.com/2012/10/births-deaths-and-marriages-at-sea.html
How to find UK Maritime BMD on FamilySearch.org partnered by findmypast.com
Posted by Mole at 7:51 AM