Your ancestor in the South African Constabulary

In 1900 the South African Constabulary (SAC) was established, somewhat optimistically, in an attempt to keep peace in the areas of the Transvaal, Orange River Colony (Orange Free State) and Swaziland.
Master-minded, under orders from Roberts, by Baden-Powell, fresh from his successful leadership of the garrison during the Siege of Mafeking, the SAC was a military body disguised as a police force. It was recruited from British men in the Cape and Natal, as well as from further afield: Britain, Australia, New Zealand, India and Ceylon.

In addition, about 1500 Canadians were dispatched to swell the ranks of the SAC. Because these men were not recruited or paid by the Canadian government, their records are held mainly in South Africa. 57 Canadians died and six won decorations while serving in the ranks of the SAC. The 2nd Royal Canadian Regiment was the first to disembark in South Africa in November 1899 and from then on various other regiments continued to arrive in waves until June 1902. Among them was the unusual unit known as Strathcona’s Horse, the ‘Canadian cowboys’.


For the South African Constabulary, Baden-Powell came up with a comfortable khaki uniform topped by a broad-brimmed American hat known as the Boss of the Plains pattern. This was usually abbreviated to B.P. and Baden-Powell remarked that this ‘brought about the mistaken notion that they (the hats) had something to do with me.’ Later, when he established the scouting movement, the uniform closely echoed that of the SAC, including the now-famous hat.
Records of Conduct and Service
Many members of the Constabulary made South Africa their permanent home. Records of Conduct and Service of the SAC held in the National Archives of South Africa provide comprehensive information. A typical record sheet gives a detailed physical description of the man, his date and place of birth, marital status, calling (occupation), religion, and name and address of his next-of-kin, as well as a list of promotions or transfers. His Defaulter’s Sheet may reveal the odd blot on his career. Should the reference to an ancestor’s SAC Record of Conduct and Service emerge on NAAIRS, the contents would take any family historian’s knowledge several leaps forward.  www.national.archives.gov.za/


More on the SAC at the following links:
www.warmuseum.ca/cwm/exhibitions/boer/southafricaconstabulary_e.shtml 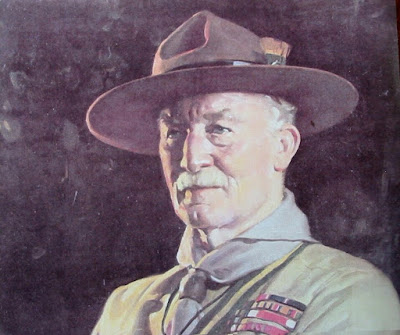 Baden-Powell in the Boss of the Plains hat with scouting uniform
Posted by Mole at 9:30 AM