To identify a regiment or find out more from a photo of an Anglo-Boer War ancestor, several avenues need to be followed: family memory or letters and other personal papers and surviving items such as medals, combined with archival sources as well as the close scrutiny of the photograph itself – with magnifying glass if necessary – revealing detail of badges or other insignia as well as who took the picture, when and where. Don’t ignore anything that might be written (or printed) on the back of the photograph, or on the card mount.
When rephotographing the photo, include the entire picture, not just the part showing the subject.

Even if all these are studied there may remain unanswered questions. You may need to call in a specialist in military research – never send your original photograph, but a good copy.

If you’re uncertain who the photographed ancestor is, remember that he might not be an ancestor at all, but a friend in the same regiment. This also applies to group photographs: they might not include your ancestor.

Ironically, it’s often easier to discover more about an ancestor who did not survive the war. There was enormous loss of life during the Anglo-Boer War, affecting both Boers and British, as well as the African population who were caught up in the conflict. Over
20 000 British died and nearly 23 000 were wounded. Disease accounted for more deaths than casualties during action. Enteric fever and dysentery killed about 18 000 – perhaps a conservative estimate.

Names of Anglo-Boer War casualties taken from the South African Defence Force Roll of Honour can be accessed at www.justdone.co.za/ROH

A roll of Natal Field Force casualties of the first part of the war (20 October 1899-26 October 1900) is searchable at http://surreygenealogist.com/sgdatabase.htm

Steve Watt: In Memoriam (University of Natal Press Pietermaritzburg 2000) provides a Roll of Honour of Imperial Forces in the Anglo-Boer War 1899-1902, 25 000 soldiers, women and civilians, who laid down their lives for the British Cause whether they were from Britian, South Africa, Rhodesia, Australia, Canada, or New Zealand. The book offers alphabetical lists by name, regimental number, regiment, type of casualty, place, date of death, where buried and whether the name is listed on a monument or in a graveyard, with location. Particulars of age and religion of the deceased, where available, are given.

John Stirling: The Colonials in South Africa 1899-1902 (Blackwood, Edinburgh 1907). A mine of information; some individual names such as those mentioned in dispatches, are included as well as details of each unit’s operations during the war.

Darrell Hall: The Hall Handbook of the Anglo-Boer War (University of Natal Press 1999) gives a useful list of British Regiments and the dates of their period of service in South Africa, with the battles or field operations at which they were present. Hall also gives a list of the Colonial Forces with SA arrival and departure dates, and a list of SA units with details such as when and where these were raised and disbanded. Men who were awarded the Victoria Cross during the Anglo-Boer War are listed alphabetically, as are names of graveyards where Imperial Soldiers were buried. There are brief biographies of some of the major personalities associated with the war. 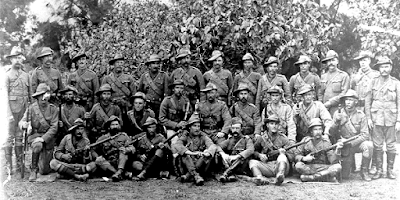