In the run-up to the war, there were about 10 000 British troops in the Cape and Natal. Before the delivery of the ultimatum, Britain dispatched reinforcements of another 10 000, about 6 000 officers and men being sent out from India. Before the end of the war was in sight, some 500 000 men were in the field.

One of the most frequently-asked questions I receive is: my ancestor fought on the British side in the Boer War. How do I find out more about him? The answer is, not without difficulty.

If the ancestor was in the British Imperial forces, he could have been in the Regular Army (Cavalry, Artillery, Infantry etc) or a Reservist. He may have been a member of the Militia (reinforcements attached to the Regulars) or among the Yeomanry. Over 120 000 recruits who had no military experience whatsoever joined the British Army during the Anglo-Boer War. If the ancestor served in the British Colonial forces, about 16 000 came from Australia, 6 600 from New Zealand, 6 000 from Canada and over 52 000 from within South Africa.

Statistics vary, but these numbers give some indication of the task ahead when trying to find information about one particular individual. For many family historians the only surviving relic of an Anglo-Boer War ancestor is a man in faded khaki staring out of an old photograph; details are usually scant, his regiment frequently unknown.

As family historians know to their cost, names, dates and places are notoriously absent from the back of photographs. In Anglo-Boer War groups, badges and insignia may not be visible or easily identifiable. More about this in a future post. 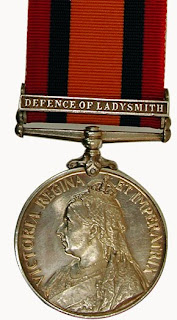 www.militarymuseum.co.za/ South African National Military History Museum: recommended reading is the article ‘Researching Ancestors who were Servicemen’.
Update 2014: the article is now accessible on this blog; see relevant top tag
Posted by Mole at 8:52 AM