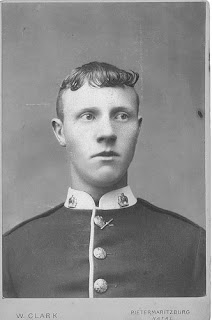 Any family historian who has looked despairingly at a photograph waiting for it to convey information will know that badges and other insignia are not always clear in Anglo-Boer War photographs, limiting our ability to identify the ancestor’s regiment.
In the accompanying cabinet print, though, the collar badge provides an excellent clue: it shows an elephant with howdah, a badge adopted when the 33rd and 76th regiments merged to form the Duke of Wellington’s Regiment (originally the elephant appeared without the howdah, so that is another clue for earlier dating purposes). The same design was used on the regimental buttons, though in this photograph the buttons are slightly out of focus.

Now that the badge has been identified, further research shows more about the possible field operations in which this young soldier could have been involved. He was evidently of an Imperial (not a Colonial) regiment and is seen here in his 'Number One' Dress - blue, not khaki. It seems likely that he was among the thousands recalled from service elsewhere in the Empire to be sent to South Africa as reinforcements. The 1st West Riding Regiment (Duke of Wellington's) served in South Africa from January 1900 to the end of the war 1902. They were present at operations at Klip Kraal, Paardeberg (18-27 Feb 1900, where the Boers were defeated) and at Renosterkop. After the reorganisation of the British Forces in May/June 1900, the 1st West Riding Regt. formed part of the Sixth Division under GOC Lieut-General T Kelly-Kenny.

For more on the 1st West Riding Regiment (Duke of Wellington's) see www.dwr.org.uk/dwr.php?id=108

The name and location of the photographic studio – stated on the mount below the photo - can be helpful in establishing where and when the picture was taken. In this instance, the photographer was W Clark who had a studio in Longmarket Street, Pietermaritzburg in the 1890s and early 1900s.

So-called vignette photographs were trendy during this period: the subject, usually head and shoulders only, faded out artistically towards the edges of the photo. It’s an attractive effect, but generally disastrous for identification of details, and military portraits unfortunately did not escape this fashion. See example showing the same soldier as above, but in vignette: www.flickr.com/photos/17890883@N04/2891321343/

A useful selection of photographs showing typical uniforms of the Anglo-Boer War era can be found at www.soldiersofthequeen.com/page5-SouthAfrica.html

Note particularly the group of British infantrymen in a varied assortment of headgear: cap, slouch hat (some more slouched than others), glengarry (triangular cap perched precariously at an angle on the head). There is a hint of discernible ‘uniform’ worn by only a couple of these men. The photograph was taken by Coyne, in Pietermaritzburg, probably ca 1900.

Also note the photograph of a Canadian Trooper of the South African Constabulary, with the distinctive high-crowned Canadian hat; more about that in a future post.
Posted by Mole at 12:16 PM