Did your mid-19th c female ancestor emigrate to SA?

If the answer to the above question is ‘Yes’, there are some excellent sources available for placing your family history narrative in context.

Eliza Feilden, in her collection of diaries and letters, later published as ‘My African Home’, describes a typical day in her colonial life:

William and Margaret get the breakfast ready, turn out the horses, fowls etc. and sweep the floor. Porridge forms their own breakfast and I begin mine with a small plateful and treacle. Then we have coffee, eggs and cold meat and any vegetable, if a suitable one was left for warming up. This morning we had beans and bacon; eggs are very scarce. We do not care much for beef this very hot weather, it will not keep well. After breakfast I make our own bed and attend to the room generally; but as we have no fine furniture or ornaments, very little dusting serves. The dewdrops form on the upper lip and I am glad to be quiet during the heat of the day … 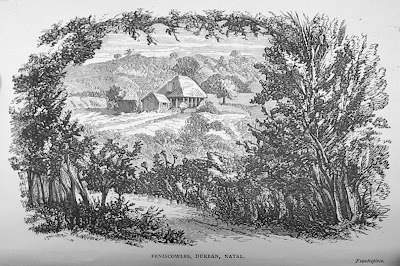 The main living area of the Feildens’ house (on their farm 'Feniscowles' seen above) had windows at each end, the walls being papered in white, but there was no carpet on the board floor. A yellowwood table stood in the centre of the space, and there was a ‘Scotch cupboard’ containing crockery, bottles, raspberry vinegar and other items. Under a side table stood bottles of porter, ‘and our bread in a great mug’.

In April 1853 Eliza noted that glass was at last available in the colony and ‘we hope soon to get some to replace our calico windows, which, besides shutting out the light, show stains of rain. Our winter is coming on, and calico alone between us and the weather will be rather cold. The broad verandah has hitherto protected us … but on one or two occasions doors and windows … have been blown about, and rain has been very troublesome. Our books, occupying some very unprotected shelves, had to be removed in a grand hurry.
At this stage the only way of reaching the upstairs room in the house was by ladder for ‘the staircase is still hanging only half up and we cannot get the joiner to work steadily at it to finish. … It is surprising how safe we feel in the bush, so very slightly protected: neither bolts nor bars, and calico in our window-frames. I shut the door by means of a pair of scissors stuck under.’

In fact, the settlers and their families were far from safe. Their backyard was the indigenous bush – or in some areas, the veld; wild animals roamed about carrying off domestic livestock and posing a threat to humans. Snakes were plentiful and a constant danger, especially to children. A bite from a venomous snake generally meant death as there was no serum at hand.

Another early colonist, Ellen McLeod, wrote in 1850 to her sister from the Byrne valley in Natal*:

‘There are a great many snakes. Georgy trod on one the other day. Fortunately it did not bite him but went back to its hole very quickly.’ Some colonists’ children were not so lucky.

Most women diarists mention the enormous variety of insects. Eliza Feilden writes: ‘the air teems with them, and the white ant, great enemy of the colonist, devours anything in the shape of wood or paper. Alas for our books – half were mutilated.’ Fleas, ticks and mosquitoes were other constant companions and there were frequent locust invasions, destroying crops.

The weather was an endless topic for discussion in letters home. Eliza complains of the sudden and heavy rain storms: 'the houses were all so slightly built and thatched that the rain frequently penetrated the roofs and sides of a dwelling, creating a general rush to save books or other articles from being injured.'

Despite seasonal rains it was difficult to obtain fresh drinking water. Enteric fever (typhoid) and other water-borne diseases were rife, and a contributory cause of the high mortality among settler children.

Later the same diseases would take their toll of military men fighting in colonial wars in South Africa, including the Anglo-Boer War 1899-1902 - but that's a subject for another post.