A photograph of your Anglo-Boer War ancestor may include soldier’s accoutrements which could give clues as to date, regiment and rank: e.g. in the Border Mounted Rifles, a Natal permanent volunteer corps, up to 1896 ammunition was carried in a pouch with a brown leather crossbelt. After that date, the ‘Royston Entanglement’ was adopted – a combined rifle sling and bandolier used by NCO’s and troopers. Officers and Warrant Officers of the unit wore the Sam-Browne sword belt.

Incidentally, the Alexandra Mounted Rifles, which evolved to become the Border Mounted Rifles in 1894, adopted the use of khaki for its field service uniform in 1874. This is the earliest recorded military use of khaki in South Africa, a possible exception being the 2nd Highland Light Infantry (74th Highlanders) who in the 8th Frontier War 1850-52 fought in doublets of that colour.

Some of the most interesting departures from standard uniform were seen among the colonial volunteer regiments. It wasn’t unknown for certain of these to take to the field in their shirtsleeves, a deplorable habit occasioning much comment from more conventional quarters. However, the colonials were valuable and courageous troops, well-suited by experience to the conditions which they faced in South Africa. This is particularly true of the colonial mounted regiments – they formed two-fifths of the entire mounted force participating in the war.

If your ancestor was among the colonials, there are numerous possibilities as to the regiment in which he could have served. On the outbreak of the Anglo-Boer War, thousands of troops from the overseas colonies were sent to South Africa from Canada, India, Ceylon, Australia and New Zealand.

In South Africa there were permanent regular forces including the Natal Police, Cape Mounted Police and Cape Mounted Rifles. These should not be confused with the permanent volunteer units which had been in place for some years, such as the Natal Carbineers, Durban Light Infantry, Diamond Fields Artillery and Diamond Fields Horse, Border Mounted Rifles, Kaffrarian Rifles, Cape Town Highlanders, the Kimberley Regiment and others.

Some forces came into being further into the course of the war, among them Kitchener’s Fighting Scouts raised in December 1900, Ashburner’s Light Horse, the Bushveld Carbineers, Dennison’s Scouts, Driscoll’s Scouts and the Cape Colony Cycle Corps.

The best place to research local armed forces serving in South Africa from 1899-1902 is The National Archives (TNA), Kew, which holds nominal rolls (soldiers’ names) and enrolment forms (completed by each man) in WO 127 and WO 126. 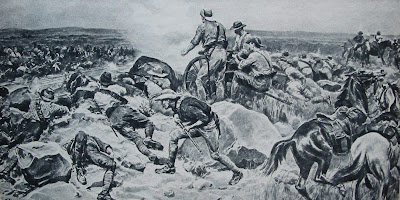 
Mafeking Relieved: At last! Baden-Powell and his heroic garrison are safe, their long privations are at an end. Lord Roberts has nobly kept his word, thanks to the dauntless and invincible courage of the troops composing the column of relief. He asked the garrison to hold out until May 18. True to his promise, succour arrived on that very day and the news reached London last night after a day of anxious waiting and eager hope deferred hour by hour.

It was just seventeen minutes past 9 o'clock when the message containing the glorious news began to come over the tape from Reuters Agency, and the Daily Telegraph had the felicity of being the first to convey the intelligence to the public by means of a placard in the front window of the office.

It was greeted with cries of joy from the passers-by. Cheers were raised and a crowd instantly collected. People gave vent to their long pent-up enthusiasm for the Defender of Mafeking, who has captured the heart of the nation and of the Empire. Strangers shook one another by the hand, staid folk forgot their staidness and shouted their loudest; the infection of the cheering spread like wildfire, and the news was carried through the streets of London like a flash.

The glad tidings for which the Empire had waited more than 200 days spread from mouth to mouth, from east to west.

[Note that today, the placename is spelt Mafikeng. But the original name added a new word to the English language: 'maffick', meaning to exult riotously.]
Posted by Mole at 8:21 PM