Mariners: The First Rung of the Ladder 2

The Solway with its sand banks and shallow waters was always a difficult stretch of water to navigate. A flag was hoisted when it was safe for sailing vessels to enter port, and in later years steam tugs aided vessels in and out of the harbour and along navigable channels. This is an appropriate analogy for the career of the mariner apprentice, navigating the shoals and hazards as he started out on his voyage and requiring an experienced pilot to guide him through the channel ahead and reach safe anchorage.

It is certain that was apprenticed to John Ritson, who was the founder of the Maryport shipbuilding firm of that name, though Ritson had been manager of the John Peat yard before launching his own business. He might have apprenticed whilst still managing Peat’s. Ritson had been a ship’s carpenter and reputedly could handle every tool from the adze to the caulking tool with great skill. It’s quite feasible that served his apprenticeship as a ship’s carpenter, a shipwright, and went to sea as a fully-fledged ‘chippie’. The average ship’s carpenter made his first voyage at 20 years plus (though it's scarcely credible that Bell waited until 1827).

Most Cumbrian shipbuilding firms were also shipowners – either minority shareholders or Managing Owners. Sometimes vessels were built by the yards speculatively in times of no orders, but shipowners they invariably were and also frequently merchants trading on their own behalf: useful hedges against the ups and downs of shipbuilding to order.

Perhaps was a Ritson employee on a Ritson built and owned vessel trading to the Cape, liked what he saw, engaged with owners who traded more regularly with the Cape, e.g. the owners of the Thorne, and eventually made the break, remaining in the Colony after that ship was wrecked on Robben Island in 1831.*

How and why young William made the move from his childhood environs to Maryport is a matter for conjecture. There may have been relatives, either there or in Bowness, who had risen to comparative affluence and were in a position to assist him. Another alternative is that his parents were in difficult circumstances, perhaps on Poor Relief, and that William was placed with John Ritson as a Parish Apprentice. 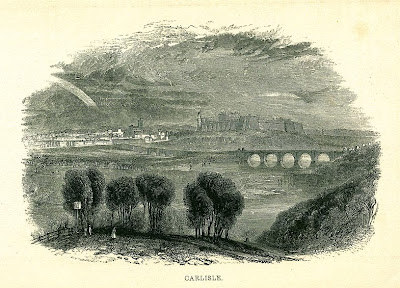 In the early 1820s the area from Bowness to  was in a depressed state, many of the working people living under harsh conditions. The weather was particularly bad, the waters of the Firth (or Frith in local parlance) rising to a greater height than had been known for years, with widespread flooding. A native of wrote:

Unsound barley meal … sold for as much as four shillings a stone; while wheat flour and butchers meat were wholly beyond the reach of the ordinary workman. It was no uncommon thing for our house to be without bread for weeks together; and I cannot remember to have ever seen in my very early years a joint of meat of any kind on my father’s table, oatmeal porridge and potatoes, with an occasional taste of bacon, being our principal food.**

With such deprivation commonplace, it’s likely that ’s parents would encourage him to aim higher than labouring as many men did on the planned (opened in March 1823). In time, the Canal would bring improved communications, the building of new ships, increased trade and a measure of prosperity but all this was as yet in the unpredictable future. An apprenticeship for William with a reputable shipyard was a much safer bet.

Titanic links: Maryport has a strong affiliation with the White Star Line and its most famous ship the Titanic. Thomas Henry Ismay, founder of the White Star Line, was born at Ropery House, , a short distance from the southern end of Elizabeth Dock. Married at the age of 22, Ismay had then amassed capital of £2,000 and within a decade was worth nearly £½million. When he died in 1899 his estate was worth £1¼million.


*The Wreck of the Thorne
http://molegenealogy.blogspot.com/search?q=wreck+of+thorne


Note: Under the Merchant Seamen, etc, Act 1823 (4 Geo IV c 25) Masters of British merchant ships of 80 tons and over were required to carry a given number of indentured apprentices. These had to be duly enrolled with the local Customs Officer. These provisions were extended by the Merchant Seamen Act 1835 (5 & 6 Wm IV c 19) which provided for the registration of these indentures. In they were registered with the General Register and Record Office of Seamen and in other ports with the Customs officers who were required to submit quarterly lists to the Registrar General. In 1844 it was provided for copies of the indentures to be sent to the Registrar General, and although compulsory apprenticeship was abolished in 1849 the system of registration was maintained. Under the Merchant Shipping Act 1894 (57 & 58 Vict c 60) a parallel arrangement was introduced for apprentices on fishing boats.
Reference: BT 150
Registry of Shipping and Seamen: Index of Apprentices
Description:
This series comprises an index, compiled by the Registrar General of Shipping and Seamen and its predecessor, of apprentices indentured in the merchant navy.
The index relates to the copy indentures in BT 151 and BT 152
Date:
1824-1953
Held by:
The National Archives,

Acknowledgement:
Derek Ellwood
Posted by Mole at 10:01 AM