James Ernest and Eugenie Caithness had nine children. The eldest Hilda was born in in 1878. James was up to something in . In 1882 Sir Rivers Thompson, the Lieutenant-Governor of Bengal, came up with the idea of an exhibition in to promote products from the . The Exhibition was held on 4 December 1883. One bronze medal was received by ‘the honourable J E Caithness member of the General Committee’.

Apart from being on the Committee for the Calcutta International Exhibition (1883-84) James Ernest Caithness played a very important part in the early 1880’s as a member of the Legislative Council of Bengal. In 1895 James Ernest Caithness is mentioned as being a ‘past master’ of the ‘Calcutta Trades’ Association’.

James Ernest by 1895 had become the Senior Partner of the firm Cooke & Kelvey. Based at 20 Old Court House Street, and also in Simla they are described as being ‘pearl and diamond merchants, jewellers, gold and silversmiths, watch and clock-makers….’  They also had an outlet at .

It may be just a coincidence but during the late 1860’s and onwards diamonds were being discovered in n 8 August 1870 the and Natal News mentions a ‘Humansdorp party’ including a Mr Caithness leaving for the diamond fields 70 miles north of Hopetown. In 1873 a Captain Caithness, possibly a relative of James Ernest, donates a ‘collection of stones from the diamond diggings’ to the Library and Museum Committee in Southampton, later to be incorporated into .

James Ernest’s uncle, Edward Bear Ridges (1825-1906) was working in at the time as a Partner in the firm Dykes & Co (Coach Builders). It was perhaps Edward Bear who helped his nephew get a job at Cooke & Kelvey. Edward’s brother-in-law, Robert Thomas Cooke (1831-1914), was the Co-Founder of the Company.


James Ernest Caithness and his uncle Edward Bear Ridges were also neighbours in Ealing when they were in iving in very substantial houses called ‘Berriedale’ and ‘Orchard Dene’. 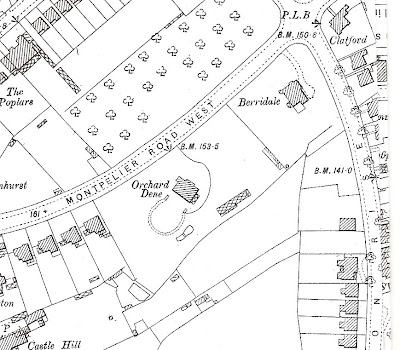 James Ernest Caithness died on the 16th February 1902 leaving a pregnant widow and eight children. A mariner’s life was definitely not for him and who could blame him? He left his widow £70,000 and I think some of that paid for the hats his daughters wore at the wedding of his second child Ethel in 1905.