‘That ship will be a coffin for somebody,’ W Sharpe, able seaman, was told when seeking employment on SS Waratah in April 1909. Nothing better offering, he took his chances, shipping on her for a voyage to . Off he noticed the vessel would roll to leeward, stop, continue the roll and recover. That was unusual in any ship.
[Source: http://dustyheaps.blogspot.com/2012/03/waratah-by-any-other-name.html]

The prediction came true only two months later: Waratah would indeed became a coffin for over 200 souls in July 1909.


Their memorials are scattered worldwide, showing how their deaths impacted on numerous and diverse families. If you can add a photograph of a relevant memorial inscription – or are a descendant of one of those who travelled on the Waratah - you are welcome to contact me via the blog comment form. Some inscriptions are shown below: 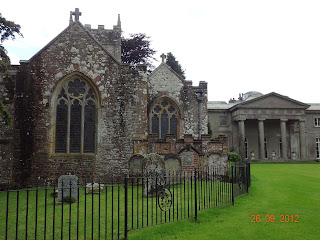 'To the Glory of God and in loving memory of Percival Browne CB of Fifehead Magdalen, , born July 27 1862. Third son of William James Browne of Buckland Filleigh Esq. Lost in the S.S. Waratah July 26 1909.'

The following announcement refers to Able Seaman T Newman of the Waratah: from The Times 18 December 1909: NEWMAN Lost in the SS Waratah, Thomas, eldest son of the late Richard & Mary Newman, formerly of Devon, England, late of the Civil Service, Tasmania, grandson of the late John Feneran of Kinsale, Ireland, and nephew of the late Revd. T H Newman, M.A. Cantab.

Harris Archibald Gibbs was an apprentice on the SS Waratah which was lost with all hands off the east coast of South Africa on 27th/28th July 1909. He was born in Bognor late 1890/early 1891 and his parents were Harris Hornsby Gibbs (born in Littlehampton) and his wife Ella (née Plucknett).

Comment from a blog reader finally sums it all up:

The truly sad thing in all of this is lack of closure for families/descendants of victims and for those who wished to make ship travel safer (learning from mistakes). The truly marvellous thing is we have a mystery that is as solid and unbreakable today as it was 100 years ago.