In St Mary’s Cemetery, Port Elizabeth, lies Captain James Ramsey Caithness: his gravestone, despite much weathering, reminds us that he died in August 1860* ‘after a painful illness’. He is not the only mariner buried in this cemetery, nor is his the only Caithness grave. Another is to Douglas Sturgess Caithness (1855-1883), a son of James Ramsey's second marriage.

Although J R Caithness did not die at sea, the seafaring life eventually took its toll and he had had his share of misfortune particularly during the 1840s.

Algoa Bay was well-known to Portuguese navigators who put in there on their voyages round the Cape: they called it Alagoa, which means lagoon. Either their visits were made in good weather or they were referring to some other feature of the landscape, because ‘lagoon’ conjures up a calm and peaceful vision. Algoa Bay was anything but calm and peaceful when the seasons were changing and the wind was in the south-east.

The 1840s were disastrous for ships at Algoa Bay as local newspapers testify. In 1843 a British snow (similar to a brig) Laura, under Captain Crockley, was wrecked on 25 August during a typical south-easterly gale. It became a double drama because the larger brig, Sea Gull, under Captain J Murray, drifting after her cables parted, struck the jetty and cannoned into the Laura. There were five drowned. The Sea Gull had been built in 1841, the Laura in 1824.**

1844 saw the wreck of the schooner Trek Boer at Algoa on her way back from Ceylon, carrying a cargo of rope; a boy was drowned. Her captain, T Cobern, had commanded the Conch in the days before Bell took her circa 1836-7. Trek Boer was an old acquaintance of Bell’s friend George Cato. Colonial maritime circles were an extended family with press reports keeping everyone abreast of who was sailing which vessel, where and for whom – and were they still afloat? One can almost hear the gossipy chats over coffee with the latest edition’s news.


In March of the same year, 1844, Captain James Ramsey Caithness had lost his schooner Mary at Algoa on the way back from Mauritius and four years later the brig Lady Leith then under his command fell victim to Thunderbolt Reef. Such were the vicissitudes of a mariner’s existence. A descendant asks if Caithness was 'accident prone': perhaps that would be a little harsh. The stretch of coast between the Cape and Natal was positively malevolent (the 15th c Portuguese  would  agree). Algoa Bay could be a death trap when the seasons were changing and the south easterlies blowing. Caithness was unlucky but certainly not the only mariner to come to grief. Twice in a lifetime does seem unfair.

Update 12 Oct 2013: further research has since shown that James Caithness lost a total of six ships during his career. See http://molegenealogy.blogspot.com/2013/09/mariners-caithness-ships-and-family.html

The notorious south-easterly gales brought a flurry of wrecks to Algoa Bay in 1846: the Susan, in March (Captain H Ager) - one body washed up, grimly, a fortnight later; the Mona (Captain P Sayers) on 28 October, the same day as the Palestine (Captain Collier) whose crew members were ill; the following day, 29 October, both the barque Resolution (Captain Clark) and the Sophia, a schooner (Capt Sillands). Reports on these wrecks appeared in the Eastern Province Herald. 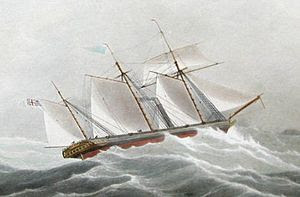 William Bell would have been all too aware of these outward manifestations of the risks taken daily by his colleagues and their ships, not to mention by their passengers. In 1842 the Grahamstown Journal, on the topic of immigration, referred in passing to a wreck which had taken place at Mouille Point on 4 September 1841. The vessel was the British barque Prince Rupert under Captain Ramage. She had been bound for New Zealand from London carrying cargo.

'We direct the careful attention of those interested in the subject of Immigration etc.... The following additions have been made to our population this year by immigrants or discharged soldiers: per Conch, the wrecked passengers ex Prince Rupert, 28 [in number].’

Presumably the passengers were grateful to be conveyed by Bell after their escape from shipwreck. History doesn’t relate who paid him for their passage on Conch. Bell, with a wife and growing family, had to earn a living but recompense for his services was not foremost in his mind when the schooner Conch, after a voyage from Table Bay, lay at anchor in Algoa Bay at the beginning of June 1842. Captain William Bell was about to have his moment of glory and to write his name in the history books. 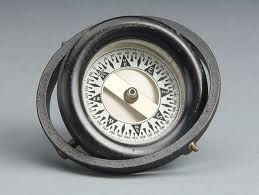 ** Grahamstown Journal: Thursday September 14 1843: 'This morning the body of the unfortunate nephew of Capt. Crockley (late of the 'Laura') was picked up and will be buried this afternoon. This makes the fourth body recovered, namely the mate of the 'Laura', one seaman and ?. Also the carpenter of the 'Sea Gull'.
http://www.eggsa.org/newspapers/index.php/grahamstown-journal/71-gj-1843-jul-sep

To read the entire series on Coastal Ships, Mariners and Visitors: Cape 19th c start at the first post:
http://molegenealogy.blogspot.com/2013/06/coastal-ships-mariners-and-visitors.html
and continue in sequence. You could also click on June in the Blog Archive at right and select each separate post in the series.

Thank you for reading! This series has been very popular and there is more to come.