On Business and Pleasure Bent

We can look at these names and can pass over them…. or … linger on names that have been lying in the dusty past for over one hundred years, so let us take a step back in time.

Sense their excitement as they boarded the ship, all with similar future plans, business dealings and sporting ambitions. Some passengers were immigrating, or simply returning to their land of birth. Imagine their anticipation of reunions, private arrangements and romance. A poignant situation involving a brief account of regular people who would soon be thrown together in an unthinkable tragedy on 27th July 1909, off the Transkei Coast of Southern Africa, to become one of the greatest sea mysteries of all time. 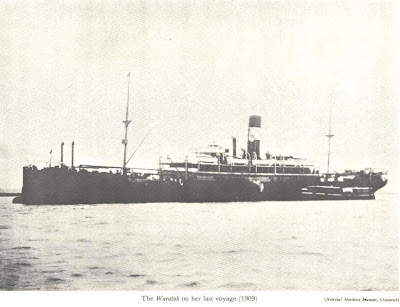 After the loss of the Waratah, on Thursday 9 December 1909, the Sydney Morning Herald published this list of some of the passengers’ plans, hopes and dreams:

Bound for
Mrs Allen, the wife of Captain A Allen, who held the position of Chief Officer of the Cargo Steamer Karori, belonging to the Union SS Company of , employed in the produce trade between Devonport and other Tasmanian ports and . Mrs Allen, who resided at No 95 Campbell Street North Sydney, took an infant with her and was bound on a pleasure trip.
Miss Rose Allen, a little girl of 6 years of age, was the daughter of Captain A Allen of the Karori, by his first marriage and was accompanying her stepmother on the voyage.
Mr Niel Black, a well-known pastoralist of Noorat in the western district of Victoria, on his way to propose to a young lady in and bring her back to his beautifully refurbished home.
Mr and Mrs Bowden and Mrs and the Misses Bowden and L D Schauman, all members of the same party, boarded the vessel at at the last moment; they had been engaged in in the hotel business.
Lieutenant Colonel Percival John Browne CB, who joined the Waratah at , commanded the Dorset Yeomanry.   Born in the year 1862 he was the son of the late Mr W J Browne of Buckland Filleigh North Devon. In 1892 he married Bernarda Gracia, daughter of the late Mr T E Lees of Woodfield Oldham, . Lieutenant Colonel Browne commanded the 7th Battalion of the Imperial Yeomanry during the South African campaign and was twice mentioned in despatches. For his services he was created a Companion of the Bath In 1900. Lieutenant Colonel Browne was the Master of the Blackmore Vale Foxhounds and his address was Fifehead Magdalen, Gillingham, .
Messrs Calder, Clark and Page, who were booked from Melbourne in the Third Class and well-known in connection with wood chopping contests, were proceeding to England with the intention of giving exhibitions of wood chopping.
Mr Page, in whose hands were the arrangements for the tour, was confident when the steamer left , of the success of the speculation, as both Calder and Clarke were champion axemen. Calder, a Tasmanian, presented a striking appearance when standing with his axe in his hand beside the block which he was to cut through. He was 6ft 5in of height and broad in proportion with a fine head and shoulders. He appeared on two occasions at Fitzgerald’s circus building when he took part in the wood chopping carnivals organised by Mr E Erskine Scott and won several prizes.
Mr William Cumming booked through Cooks Travel at .
Mr John Ebsworth was a prominent solicitor practising in and was the holder of a Master Mariner's Certificate. Prior to engaging in the practice of law, he occupied the positions of Second and Chief Officer of Steamers trading between and for seven or eight years, and on account of his seafaring experience, his services were greatly sought for in the Marine Court of Victoria. Mr Ebsworth was a prominent Mason and was the son of Mr John Ebsworth, solicitor of .
Mrs Govett, a resident of the western district, , and for some time before sailing, had been residing with Mrs Orr at , Potts Point.
Miss Henderson, a maid in the service of Mrs Smart of the Hotel Australia.
Mr J M S Hunter of , returning to from a visit to his son, was interested in pastoral pursuits in this State.
Miss Lascelles of , the daughter of Mr Lascelles of the firm of Dennys, Lascelles and Company and one of the Geelong Harbour Trust Commissioners.
Mrs Starke and Miss Starke were the mother and sister of Mr H E Starke, barrister of , who had been admitted to the New South Wales Bar on November 2nd. Mr Starke for whom much sympathy was felt, appeared in shortly after the event in the patents case.
Mr G H Tlckell, whose name appeared in the list of Third Class passengers from , was the son of Captain Tickell, Victorian State Naval Commandant. Young Tickell, an only son, was in reality attached to the engineering staff of the Waratah and making the trip for the purpose of gaining practical experience in marine engineering.
Mr J T Wilson and Miss Wilson, who also joined at , resided at , Malvern.
Mrs and Miss Wilson, saloon passengers from Melbourne, the wife and daughter of the manager of the Royal Bank .

Mrs Harvey, Master Harvey and Silas Miller from , , who had joined the Waratah at for .
Miss K Lees, a niece of Lieutenant Colonel Browne and was travelling with him. Miss Lees had been on a visit to and was returning by the Waratah.
Miss L Cooke, Miss Lees lady’s maid returning to with her.
Mr Charles Taylor and his wife and two small children returning to , , from . Mr Taylor lately worked in De Beers Mine at and was an active member of the local North of England Association.

Let us also remember all those unmentioned passengers, the Captain and crew of the SS Waratah and the passengers soon to board this ill-fated ship, which would vanish without trace on that fateful night of 27 July 1909. 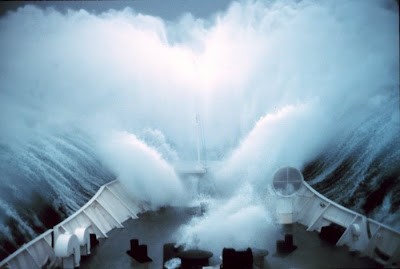 Not as far as I know. Sorry.