Natal immigration in the 1860s


After the Byrne settler era, the discovery of gold in Australia lured some Natal immigrants away between 1852 and 1854. A few found pastures no greener there, and returned to Natal. As happened in the Cape, colonists invited family members to follow in their footsteps and government subsidies were an added incentive to do so. This system of aided immigration to Natal was developed further by settler agent Dr R J Mann in the 1860s, who also published a Guide to the Colony of Natal.

Passages were not free, but were inexpensive. Respectable settlers appreciated that they were not accepting charity and could repay the government loan when they prospered. Nevertheless, results were disappointing – in five years only 1 342 immigrants arrived in what was becoming known as the Cinderella Colony.

In the Natal Almanac edition of 1865 details are given of Public Aid to Immigrants in 1865, stating that passage monies could be repaid at the rate of 10 pounds per statute adult, within a year after landing. Assisted immigrants to Natal received grants of 50 acres of land, and conveyance was offered to their allotted property – this was vital as the lands were at a distance from the port. 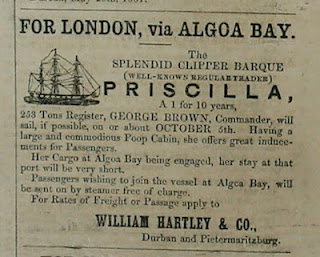 The voyage from England took about 65 days by sailing ship and 40 days by steamship. Private individuals who were well-heeled enough to travel first class to Natal paid 35 guineas for a berth on a sailing ship, and 52 pounds 10 shillings on a mail-steamer. Note the difference between these sums and the 10 pound passage of the aided immigrant scheme.

My great grandfather Gadsden sailed from England to Natal on the barque Priscilla, in 1863. At 253 tons the ship was far smaller than most of the Byrne settler ships. Priscilla carried a general cargo and seven cabin passengers. There is no surviving list showing steerage passengers on this particular voyage but in September 1860 Priscilla had arrived at Natal with 105 people in steerage; it must have been an uncomfortable and cramped experience, even though the ship was described in contemporary advertisements as a ‘fast-sailing clipper barque’. The term clipper indicated forward-raking bows and aft-raking masts, these attributes lending speed and giving the ship fine lines.