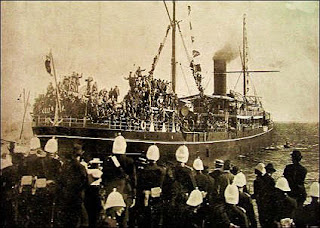 Not everyone who sailed to South Africa from overseas was an emigrant: their reasons often had more to do with their occupation or life circumstances. Ancestors in the military had no choice as to where they would be expected to serve.

Throughout the era of British government in South Africa there was movement of troops into and out of the country. Some regiments spent years garrisoning forts or fighting in colonial wars such as the Cape Frontier Wars, the Anglo-Zulu War of 1879, and the Anglo-Boer War of 1899-1902. Many had seen action in other parts of the Empire: India, Afghanistan etc.

Some elected to say in the colonies after being discharged from the army, or went back to their home country to collect their families and return to South Africa; others married South African women and settled permanently. For these ancestors a search for deceased estate files may be the sensible approach.

Tracing military arrivals by ship is almost impossible. Passenger lists may sometimes identify officers, but the rank-and-file are seldom named, e.g. ‘12 men 45th Regiment’ arrived at Port Natal on the Flora from Table Bay in December 1846, and that’s probably all we’ll ever know about them. Each one may be somebody’s ancestor. If the Regiment is known, military records would be the starting point.

There are occasional exceptions: men recruited in England to join the Natal Mounted Police (later called the Natal Police) came to South Africa on ships such as the Kinfauns Castle in 1880. They are individually named in lists held in the European Immigration Department records (EI) at Pietermaritzburg Archives Repository. These records are not online though selected examples may appear on this blog.