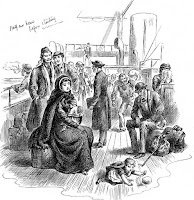 Registers of arrivals and departures of ships at Table Bay and Simon’s Bay 1822-1917, as well as arrivals and departures at Algoa Bay (Port Elizabeth) 1846-1901, are held at Cape Archives Repository under the Archives of the Secretary, Cape Town Chamber of Commerce (CC). The lists giving the name of the captain and sometimes the names of first class passengers. (Most family historians are usually more interested in who was in steerage.)

If a PIO file for your ancestor should emerge on NAAIRS, this indicates documents in the Archives of the Principal Immigration Officer, Cape Town, covering 1904-1967, and they are informative. Passengers entering a South African port had to complete a declaration form giving name, age, birthplace, nationality, occupation, marital status, names of spouse and children, age and birthplace of spouse, reason for entering the country, port of embarkation and name of ship.

Colonial Office Emigration Correspondence 1817-1896 (not only South Africa-related) is held at The National Archives, Kew, in CO 384.