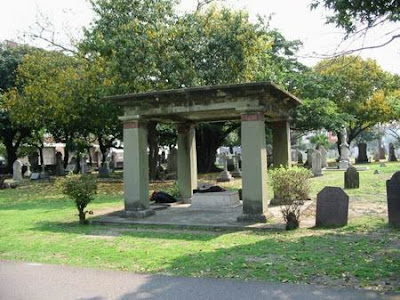 While we're on the topic of death, a query came in today asking about burials and cremations at Stellawood Cemetery, Durban.

Stellawood –a vast cemetery in the suburb of Umbilo, Durban - was opened and burials begun in 1904. The Stellawood Crematorium, however, dates from 1926. There are registers for both the Cemetery and the Crematorium, searchable at the relevant office by year. These records are not online.

Stellawood Cemetery memorial inscriptions are currently (2012) being photographed by a group of dedicated volunteers.

The memorial inscriptions at West Street Cemetery, Durban, read like a roll-call of Natal settlers. Much earlier burials took place at the Point Cemetery: at the link below there’s a list of who was buried at the Point Cemetery and details of the exhumation of the remains of colonists and their re-interment at West Street Cemetery in 1896.
molegenealogy.blogspot.com/2012/09/heritage-month-point-settlers-memorial.html

An index to West Street Cemetery has been published by GSSA (Genealogical Society of South Africa) in their Cemetery Recording Project series on CD. Other Durban cemeteries covered in the series include St Thomas's Church Cemetery and the Wyatt Road Military Cemetery.