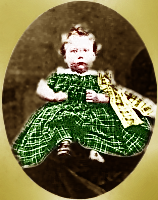 If a will was made by the deceased, it should be found in his deceased estate file. Some wills are not particularly informative being in a standard format, though beneficiaries (people benefiting under terms of the will) are named and specific bequests such as the medals of a military man may be included. Occasionally, there are unexpected revelations e.g. additional bequests to a favourite god-daughter, or an adopted or illegitimate child previously unknown to the family; or even a mistress being rewarded for services rendered (be careful, she might have been the housekeeper).

Family rifts may show up in the will. One angry father would not allow his daughter to benefit under his will because she had 'taken her mother's side' in her parents' divorce. A child not appearing as a beneficiary isn't necessarily evidence of a rift. Sometimes parents preferred to leave assets to children who weren't as well-established as the others. This could lead to ill-feeling in the family and to a will being contested.

Instructions might be given in the will as to the deceased's choice of burial or cremation, which could be helpful when you're seeking his last resting-place.

If an individual died intestate (no will) the document will obviously not be among the contents of the estate file.

In family history research, it's essential to look beyond the stated facts: a list of children on a Death Notice of 1903 showed 5 sons and 3 daughters, only 2 of them 'of age' (majors) and all of them living with the surviving parent, their mother. The minor children ranged in ages from 14 to 4 and none of them were wage-earning. From the time of his father's death, the eldest son would have to take on the role of breadwinner. The Death Notice revealed that the estate was of limited value, and that the deceased had died intestate, leaving no immovable property and not much in the way of movables either. Reading between the lines, a parlous situation for this family - and not a particularly unusual one. Considering the date (1903) it's possible that the father was a casualty of war; the Anglo-Boer War ended in 1902.
Posted by Mole at 8:32 AM