Until about 1880, America was the prime destination for Norwegian emigrants. Attention was turned to South Africa when Norwegian missionaries to this area sent back favourable reports of climate and other conditions. The farming community around Aalesund showed particular interest in Natal and a letter was sent to Mr Emil Berg at the Seaman's Mission, London, requesting more information. Berg duly contacted Walter Peace, the Natal Government Agent, who drew up a scheme for assisted immigration, initially offered to fifty families.

Each family would be given a free passage from London, as well as an allotment of 100 acres for which they would pay ninepence an acre over a period of 10 years, commencing after the 2nd year of taking up their properties. A further 2 000 acres would also be allotted to the community as a whole, for which no payment would be exacted.

Each family had to possess at least £50 in cash to tide them over the uncertain settling-in period in their new home. They had to produce a certificate of health, signed by a doctor, and a testimonial to good character - only hard-working, honest, Christian individuals of sober habits qualified, and those who would be willing to help one another in the new endeavour. Any family was allowed to bring with them two unmarried persons and most took advantage of this additional facility.

A committee was formed in Aalesund and about 300 applications were received. Though farmers were favoured, a variety of professions and occupations were included among the would-be settlers. Walter Peace himself visited Aalesund on 9 July 1882 to speed the party on their way with an encouraging account of the bright prospects which lay ahead.

When the time came, on 14 July 1882 a group of 34 families, 233 persons in all, left Aalesund on the west coast of Norway on the ship Tasso (Wilson Line) for Hull, England. It was the first leg of their much longer journey to Natal.

The passengers were welcomed on board the C.H.M.S. Lapland by Captain POTTS and the ship's doctor, STUART, and the ship departed the East India Dock, London on 20 July 1882, bound for South Africa.

The voyage took 39 days and was fairly uneventful, though three children died. On reaching Table Bay, it was found that an outbreak of smallpox was raging in Cape Town, preventing the passengers disembarking, but fresh provisions and coal were taken on and the ship continued up the coast, arriving at the mouth of the Umzimkulu River on 27 August. Here, weather conditions militated against a landing, and it was decided to go on to Port Natal (Durban). Once there, however, the question was how to transport the settlers and their possessions southwards to the Umzimkulu area, where their allotments were situated. If attempted by wagon, there would be numerous rivers to cross on the journey along the coast and the distance was about 100 miles from Durban.

After some earnest deliberations between captain, crew and settlers, the Lapland did an about-turn and headed back for the Umzimkulu mouth, accompanied by a lighter which would ferry the passengers from ship to shore. Their baggage would follow by land later.

On the evening of Monday 28 August the Lapland anchored 1½ miles off shore to the north of the Umzimkulu mouth and the Captain gave instructions for the burning of blue lights and the firing of rockets, which were answered by similar lights from the land, as well as the explosion of five dynamite charges. The immigrants gave three hearty cheers, and, gathered together on the deck, gave a fine rendition of several hymns.

Early on Tuesday morning the settlers prepared to disembark in relays on the lighter, which had to batten her hatches against the rough seas. The heat, lack of fresh air and pitching of the vessel made the landing an unpleasant experience for those crowded below; some were violently seasick and others fainted. The small steamer Somtseu drew the lighter over the river mouth.

Several prominent colonists were on hand to welcome the new arrivals, among them David Aiken, Brickhill, Pearce, Bazley, General Bissett, Reid and Sinclair. H T Bru-de-Wold * had been assigned by the government to meet his fellow Norwegians and assist them with transport and guides. Another sort of welcome was arranged by Duka Fynn, son of Henry Fynn - a war dance by 400 Africans was perhaps not best calculated to relax the settlers, some of whom hid in the bush when the entertainment began.

There was still a trek to the allotments to be accomplished. The sight that met the immigrants' eyes was scarcely welcoming: two grass huts, boasting a single door and no windows, were provided for each family. It was some time since the huts had been constructed, and the interiors had been taken over by weeds, frogs and insect life. To the Norwegians, accustomed to a particularly clean and ordered way of living, these dwellings must have been a severe shock.

Some salt and two bags of mealie meal were supplied to each household, supposedly to ease the first difficult weeks. Edward Haajem recorded: 'None of us knew anything about this kind of meal, and it became a great puzzle how to make bread of it.' Their possessions took several days to arrive by wagon and more shocks were in store: all the Norwegian housewives' careful packing of boxes and trunks for the sea voyage hadn't been proof against the jolting of the wagons on stony terrain. Many of the precious items were found to be irreparably damaged.

And there they were, attempting to make the best of things, with leaking thatched roofs, and no sugar or milk to eat with their mealie porridge. Potatoes were planted and became their staple food. Quoting Haajem again: 'It was really a hard time ... the first year before we got together a few Zulu cows and a few hens to lay eggs, and the kitchen garden going. After we got in our first crop of mealies and sweet potatoes we had plenty of food ... and fed our pigs and cured bacon.'

Possibly the greatest disappointment was that the promised harbour hadn't materialized. They had hoped for something similar to the one at home in Aalesund, where fishing boats could tie up alongside a wharf. The one at the Umzimkulu mouth was in fact never to be built, for the Government procrastinated endlessly (the project was completely abandoned in 1906). Fish was 'imported' by wagon from Durban for the settlers' consumption - adding insult to injury.

'After a year or two our clothes and shoes began to be the worse for wear, and the little money we had was also nearly gone, and here was no market for our produce.'

The consequence of all these hardships was that some of the settlers remained only a short while before departing for Norway on two sailing ships which they built themselves - such was their enthusiasm to get back home. Some settlers moved to different areas of South Africa or to Australia or New Zealand, but others persevered and in due course a thriving community developed, with a church and a school - the original Lutheran church at Marburg is in use to this day. The settlement covered an area between the Umzimkulu and Izotsha Rivers.

Famous names such as Björseth, Brauteseth, Halland, Kjönstad, Rödseth and others were among this group of Norwegians. See list of families.

Norwegian names familiar in this area such as Titlestad and Leisegang, were not immigrant families per se, but descended from missionaries in Natal - and that is another story. 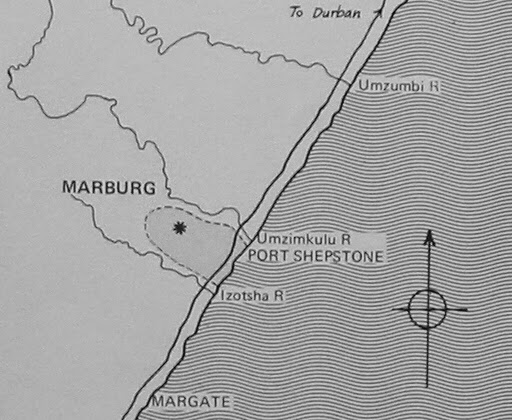 Fascinating insight into the hardships of early colonization.

Yes, we forget how spoilt we are with our cars and supermarkets and convenience foods of huge variety, not to mention a proper roof over our head and medical attention when required. Perhaps they were happier leading simpler, though harder, lives. When I read these accounts I know I am no pioneer, despite my pioneering ancestry. Mole