Caithness in the Zulu Country 1879

The Hampshire Advertiser of 5 March 1879 reported thus on the preparations being made in Pietermaritzburg, , should the inhabitants of that city be ‘required to go into Laager’ i.e. for their defence against a possible attack by the Zulu army. 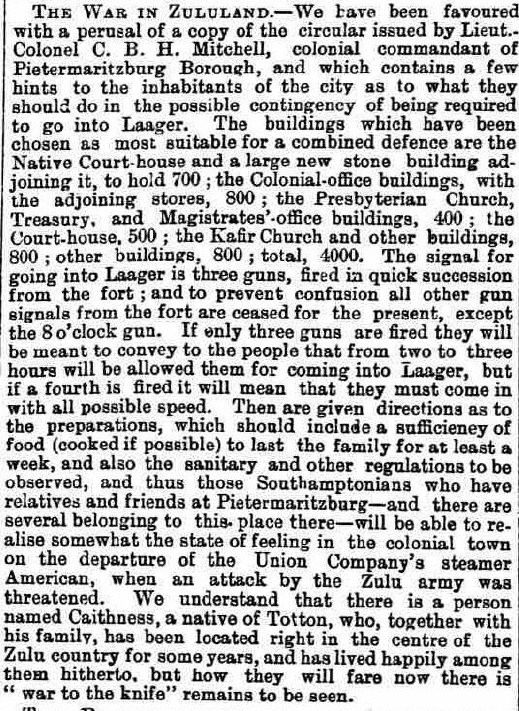 Details are given about the various buildings selected to house people and stores, and mention of the signal to be given for people to assemble at these designated places bringing with them sufficient food supplies to last a week. This doom and gloom was hardly reassuring for ‘Southamptonians who have relatives and friends at Pietermaritzburg’ but remember that the disastrous battle of Isandlwana on 22 January 1879 was still fresh in everyone’s mind.

A 20 000-strong Zulu force had swooped down on and decimated part of Lord Chelmsford’s main British column encamped under the lee of a strangely-shaped mountain in the heart of Zulu territory.

’s population had been on tenterhooks since then. Buildings such as the Court House in had been loopholed (gaps made in the exterior walls for the firing of guns) in case of attack.

From a family historian’s point of view, by far the most intriguing portion of the report is the final sentence:

We understand that there is a person named Caithness, a native of Totton, who, together with his family, has been located right in the centre of the Zulu country for some years, and has lived happily among them hitherto, but how they will fare now there is ‘war to the knife’ remains to be seen.

Who could this person be?

Mary Ann Bell nee Caithness was still living in , , at this date, though her husband Captain William Bell had been dead for a decade. However, the report suggests that the individual is male, and Mary Ann’s progeny were, of course, Bells not Caithnesses.

James Ramsay Caithness the mariner brother of Mary Ann had died in 1860, and he had been Cape-based. What of his children? Could any of them be the who had been living ‘in the Zulu Country’?

James Edward Caithness (who later preferred to call himself James Ernest) had left home at some juncture during the years following his father’s death. It’s rumoured that he tried sheep farming, perhaps in , but it is known for certain that in December 1877 James was in for a key event – his marriage to Eugenie Sarah Henrietta Westmacott.

Their eldest child was born in 1878 in and it seems that James’s career took off in . By 1895 he was a senior partner in the offices of Cooke and Kelvey, pearl and diamond merchants, watch and clock makers etc. There’s no evidence among these facts to support the idea that he might have been in in 1879.
Muddying the water is the terminology used in the report. What did ‘right in the centre of the Zulu country’ mean precisely? In Zululand, i.e. to the north of the , or in the separate region then known as the Colony of Natal? It’s possible that to someone writing for a Hampshire newspaper in 1879 the distinction wasn’t clear. Had the person really been ‘living among the Zulus’ – which conveys an impression of residence in a rural area such as a missionary or trader might have experienced – or had he been part of a community in or nearby one of the main Natal towns such as Pietermaritzburg or Durban?

The emergence of an unexpected marriage record gives further pause for thought.