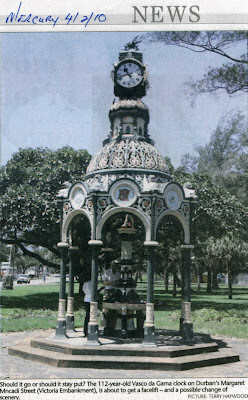 The Vasco da Gama clock and drinking fountain was erected in 1897 in Durban to mark the 400th anniversary of the Portuguese explorer's sighting and naming of Natal on Christmas Eve 1497.

Manufactured by Macfarlane's Saracen Foundry in Glasgow, Scotland (who also made the Currie Memorial Fountain pictured below) the decorative cast iron structure was originally placed at the corner of Point Road and Southampton Street near the Point Docks. It was moved to the Victoria Embankment in 1969.

In 2010 it was proposed that the clock should be restored and relocated prior to the World Cup in June of that year; the Embankment site was deemed 'inappropriate'. The relocation did not take place, probably because the cost of the exercise (R500 000) for the dismantling, refurbishing and moving of the clock was found to be prohibitive. However, various other locations have subsequently been suggested and the fate of the clock hangs in the balance. The decision rests with eThekwini municipality and Amafa (Heritage KZN).

The Currie Memorial Fountain, which previously stood at the corner of Point Road and West Street, is now at Durban Botanic Gardens.

The plaque below the fountain reads as follows:

H.W. Currie Memorial Fountain.Erected in 1889 in grateful remembrance of Mr H W Currie, for many years a Town Councillor and Mayor in 1879-1880, through whose resource and perseverance this town was saved from a serious water famine by the establishment in 1878 of the wells and pumps known as Currie's Fountain at the foot of the Botanic Gardens.

I write a blog about memorial drinking fountains and would like permission to use your photos. I would, of course, credit and link back to your website.

Yes, certainly you may do so. Thanks for asking. The Currie's Memorial Fountain photos were taken by me. Obviously the flickr pic (see relevant link)and the pic from The Natal Mercury were not. Mole

Thank you. Blog has been posted.
http://memorialdrinkingfountains.wordpress.com/