Source: Record of the Cape Mounted Riflemen by Basil Williams (1909)


The Cape Mounted Riflemen, Colonial (1855-1913) should be distinguished from that raised by the Imperial authorities in 1806, and bearing the same name. The Colonial Regiment was raised in 1855, with the designation of the Frontier Armed and Mounted Police. Its name was changed to the Cape Mounted Riflemen in 1878. The FAMP had an original strength of 17 officers and 500 other ranks, and until the disbanding of the Imperial CMR carried out police duties in the Eastern Province of the Cape. After that date (1870), it was increasingly called upon for military duty, either in the form of active service, or in occupying areas in which there were native disturbances. When the new title was adopted in 1878, the name of the older Imperial regiment was deliberately chosen. 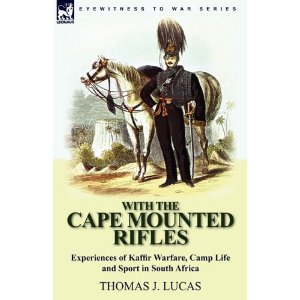