In July 2012 it was reported that the memorial to the Prince Imperial, near Nqutu in the Dundee district, had been the target of vandals for the second time in six months. The marble cross marking the site was destroyed and the supporting structure seriously damaged.

This served no purpose: the site is a memorial – there are no human remains buried there and nothing of value is hidden below the surface.


The cross commemorates the death of Prince Louis Napoleon who was the only son of the Emperor Napoleon III and the Empress Eugenie, and was also the great-nephew of Napoleon I. 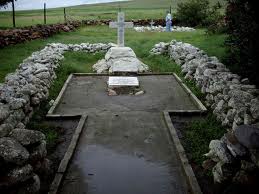 The Prince Imperial, who had been educated towards a military career, obtained permission from Queen Victoria to sail to South Africa with British reinforcements as a special observer during the Anglo-Zulu War, arriving in Cape Town on 26 March 1879 and later continuing his journey to Durban and subsequently to Pietermaritzburg. He was attached to the staff of Lord Chelmsford as an extra aide-de-camp; the responsibility for the Prince’s safety rested heavily on Chelmsford, especially as that young gentleman was an enthusiastic soldier.

In June, the Prince was among a detachment, including Lieutenant Carey, sent to choose a camp for the army’s march on Ulundi. During this patrol the troops came under surprise attack and the Prince was killed. His body was recovered and returned to England. A year later the Empress Eugenie sailed to South Africa to visit the place where the Prince had died, and where the commemorative memorial had been set up.

The incident at the Prince Imperial memorial site followed hard upon the heels of the desecration of the Intombi Military Cemetery near Ladysmith, earlier in the year. A grave was dug up, creating a hole 2m deep, and a headstone was damaged.

From the photograph taken at the site the headstone appears to be one of the distinctive Border Mounted Rifles’ memorials. I believe the headstone could be that of William Dixon Smith, Lieutenant Quartermaster of the BMR, who died at Intombi in January 1900 – not a faceless soldier to me, but a real person, whose Siege letters I’ve read and whose life and family history I have researched in depth. The situation is deplorable no matter which grave has been disturbed.

A spokesman for Amafa/Heritage KZN believes that buttons, badges and other military items were the object of the illegal excavations, though such items would not have been buried in this formal cemetery. It was therefore wasted effort on the part of the vandals and restoration of the damaged section will be expensive. It is an offence to remove any relic from a battlefield or grave site and any person found guilty of the crime faces a prison sentence; there is a reward offered for information leading to a conviction.

A disturbing aspect of the incidents is that, according to Amafa, relic hunters pay locals to unearth valuable collectors’ items from these sites. This may be the case in certain instances but if relic hunters are knowledgeable about collecting militaria they would presumably do their homework before delegating any excavations: it seems unlikely that a site such as the Prince Imperial memorial would be targeted since no militaria could be expected to be found where no body lies buried. 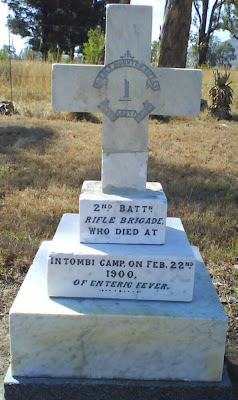 In an earlier refurbishment programme at Intombi Military Cemetery, the cross (seen left) which should have been attached to a Border Mounted Rifles memorial has instead been cemented onto the plinth of an unknown soldier of the 2nd Battn Rifle Brigade. A number of memorial stones to men of the Border Mounted Rifles now lack the surmounting cross bearing the famous Boot and Spur of that regiment.