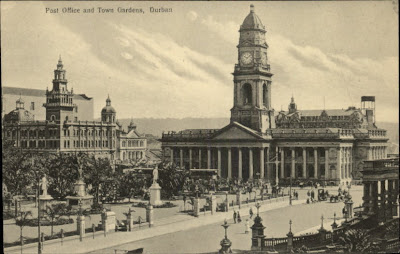 Now the Main Post Office, this building dating from 1885 was previously Durban's Town Hall. From its steps, Winston Churchill made a speech after his escape from captivity at Pretoria during the Anglo-Boer War, arriving at Durban on 23 December 1899.

A plaque on the exterior of the building commemorates this occasion. See http://www.flickr.com/photos/anthonyuk/6931230731/

The current City Hall, at right in the foreground of this postcard photo, was opened in 1910. The open space which used to be known as the Town Gardens, opposite both buildings, was later renamed Farewell Square.  Read about Lieutenant Francis George Farewell (1793-1829):