On Thursday 19 March 1896, The Times of Natal carried a report on the exhumation of those colonists buried at the Point Cemetery and the re-interment of their remains at the West Street Cemetery. The report includes a list of the buried, as far as it was possible to determine at the time. Was one of your ancestors among them? 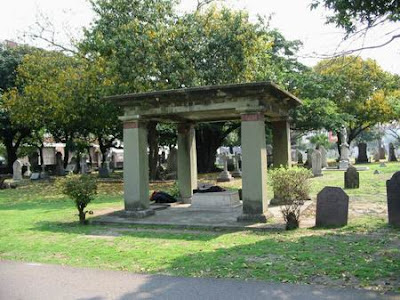 Article from The Times of Natal:

POINT CEMETERY: EXHUMATION AND REMOVAL. LIST OF THE BURIED.

Within an obscure and unfrequented corner of the Point, amid the sand-dunes, bounded by bush and shut in with bramble, it was the custom for upwards of a generation to inter the dead. Here, upon high ground, near the end of the low-lying narrow tongue, the sailor, billow-beaten, was laid to sleep, lulled by the lapping wave; the soldier of the young Queen found recompense and repose after bivouac and duties done; and colonist and citizen have sunk to rest from labour upon the threshold of the sea. Between 1839 and 1882 the remains of five score and nine sojourners and residents were buried in this acre of sand above the shore; none had reached the Psalmist's span, although some were well up in years, and there were children whose lives were only in the bud. Fifty-seven years ago was seen the first graveside gathering in that weird and lonely spot, and 14 years have passed since the last burial service on the hill. But it is no longer lonely. The tide of trade has flowed about the sepulchre, and spring-floods of progress have now swept away the landmarks and memorials of the past. The peace of the early days is gone. The Union warehouse and Brown's foundry almost touch the sacred precincts, and the rush of machinery, the whistle of the locomotive, the roar of traffic, the bustle of business, the throb and babel of this latter life - even the intrusive habitations of the living - destroy the quietude of the place, and make a cemetery in the situation an anomaly. And the remains have been all disinterred, for final and more fitting sepulture (sic; burial) in the City of the Still. There, at the Point, was a jungle dark and in disrepute, and trace of even the best-known buried there was hidden. Trees interlaced their branches overhead, and sent their roots deep down into the grave; and the surface sand was rank and wild with thicket and creeper; it was a dustbin for refuse and the habitat of snakes. Here, in the west of Durban, the bones of the dead will be laid reverently to rest, order and decency will be preserved, and on the spot now set apart a general memorial will be erected.

The above represents all that can be ascertained in regard to the military men. The first named died in the year of the withdrawal of the British troops. Numbers 2 to 8 were probably among the party of nine who were drowned on the bar by the swamping of a boat of HMS Southampton when she came to the rescue of the garrison, or were killed, on the 26 June 1842. In the list from which this is copied, 1840 is the date given for numbers 2 and 3, but this is probably an error; there were no troops in Natal on that date. These had tombstones of Bluff rock, but the rain has worn out the inscription. Numbers 7 and 8 are given as 1843, but this also appears to be incorrect. There was no fighting at Port Natal in that year. The headstone of Lance Corporal Robert Arthur sets forth that he was 'killed while effecting a landing for this place, then in the hands of the emigrant farmers'.

Below are six names for which there are no particulars, saving that E. B. Ledson died at the age of 57 and was related to Nos 19, 48 and 69.

On the list of 52 supplied from the Addington Register, 14 marked * have been identified, and the remains of all contained in the other three lists have also been identified from internal evidence, this affording the only clue to the names. Thus there are 38 identified in name and remains, 38 whose names are known but whose remains cannot be identified, and 33 of whom nothing is known, save that they were, and that bones are now all that is left of them. The remains of children found were 34 in number, and as 28 are identified above, there remain but 6 out of the 33, so that 27 were of maturer years, where name and memory were lost. In 1882 interment ceased altogether, the cemetery was 'closed', and although efforts were made towards the removal of the remains, nothing was done by the powers that were. The cemetery was allowed to remain in neglect and disorder - for the sake of £300. In the month of June last a sum of £400 was passed by the Legislative Assembly to provide what decency and respect for the dead demanded. Mr S Dove was asked to go over the ground, and the initial survey had to be undertaken upon hands and knees beneath the bending boughs, amid the underwood and the waste and rubbish thrown in desecration of God's acre. Upon his report, the task of exhumation was placed in his hands, and with eight coolies and a foreman Mr Dove commenced active operations on Saturday fortnight the work taking some 12 days. A week earlier the manufacture of coffins was commenced, and 34 have been made for children, 75 for adults, but when as many as 20 remains were recovered in one day, the carpenters had difficulty in keeping pace with the demand. Some days the search was entirely fruitless, although a depth of eight feet was reached. It was, of course, comparatively easy to find and identify remains where headstones were erected. In some cases the breast plate supplied required information, and when nothing else afforded a clue buttons or boots, or ammunition indicated what history did not reveal. Sometimes a skeleton was not complete, once a skull was absent, in several instances the legs of the dead appeared to have been broken, the bone having grown together, shortening the stature. Only one skeleton, of a woman, was found without a coffin, and she had been buried within 2½ft of the surface - the two facts pointing, in the opinion of some, to a dark deed of days gone by. One remarkable fact was that the skulls of the older interments showed the finest sets of teeth, those of a later date evidencing deterioration. In one case there could be seen the broken teeth of the confirmed smoker, and a short clay pipe with the remains of the last smoke, was brought to light. Old Mr Spradbrow buried a son and daughter (Nos 27 and 78) in the cemetery, Mrs Nelson being the last of all to be interred; and although he keenly felt the necessity to disturb their remains he is now quite satisfied with the manner of exhumation and the reinterment. D Robertson (11) shut off with white palings, was father of Mr J Robertson of Johannesburg, late of the Point Railway Station. Capt (56) and Mrs Tucker (49) were the parents of Mrs Geo Smith . G A Armstrong (67) was the first husband of Mrs Bryant of the Castle Boarding House, and her child was buried near by. Of other children there are those of C Vincent (16), A Drimie (57), J T Anderson (58) and J Mathias (59,74,75). In addition to the stone set up to Richmond, Duncan, and Arthur (7,8,9) the three Morrissons (34, 35, 43) were laid beneath one slab of slate. J Phillips (40) who - like 53 - was drowned in the Bay, was the husband of 66. The grave of G A McIntyre (15) was surrounded by lattice work. Over Charles Jones (42) was the text: 'The eyes of the Lord are in every place, beholding the evil and the good.' The head-board of R W Morton (45), drowned in the Bay, bears the words: 'So my Father orders it, His will be done'. Below are other inscriptions:-

(76) 'In loving remembrance of Annie Catherine, beloved daughter of Thos and Alice Hunt, 1 year 9 months 1 day 'Suffer the little children to come unto me'.

(51) 'Captain William Douglas Bell, 25 years port captain of this port, died 10th April, 1869, aged 62. At the taking of Port Natal from the insurgent Boers, he rendered valuable service by towing into port, under fire of the enemy, the boats of the Southampton frigate, and through his after career in life was held in esteem, and as a faithful servant of Government. A good husband and an affectionate father'. [This inscription is on the plaque below Captain Bell's obelisk, not far from the Point Settlers Memorial.]

The Minister of Lands and Works sent Mr Wolhuter, the oldest colonist, a railway pass to enable him to attend the funeral and the hale and hearty old man, now in his 82nd year, came down from Maritzburg yesterday for the purpose of being present. An opportune call from him enabled us to verify some of our data. He told us that he knew Captain Bell from the year 1831, when second officer of the Thorne. In that year the barque got becalmed in a fog on leaving Table Bay, and went ashore on Robben Island. As to Morrisson, on Mr Wolhuter's third visit to Natal in 1844, after leaving Port Elizabeth in the Pilot, with a strong westerly breeze, Andrew (second officer) was put on the yard arm as look-out. At 11 o'clock at night he heard the captain say, "Isn't that land"? And Morrisson's reply was, "Yes, and we are in the breakers already". Had he not been on the yard arm, the danger could not have been averted in time to save the ship. Mr Wolhuter also knew Ensign Morley and attended his funeral. He was in command of the Point, where he was stationed for 15 years. He came from England as sergt-major in the Rodney battleship of 93 guns, in the year 1845, and received his commission by next mail.