Conflict at Port Natal 1842: the Siege and Relief of the British Camp at Itafa Malinde*

* 'The Plain of the Look Out', also known as 'Commetjies Flat', later the site of The Old Fort.

Captain Thomas Charlton Smith, forced to retreat after the skirmish against the Dutch at Congella on the night of 23 May 1842, returned with his men to the British camp. Of the 138 British who marched to Congella only 87 survived, reaching camp at 2 a.m. on 24 May.

After the 24 hours allotted for burying the dead, Smith, playing for time, asked for an armistice of 7 days so that he could consider his position: it was an unenviable one for any commander, 'with close to 500 people jammed into a crowded laager, low on food and with no good water' and no imminent prospect of relief.


Clearly, it was essential that the authorities at the Cape should be told of the situation, and as quickly as possible - but how could that be achieved?

There were two trading vessels, the Pilot and the Mazeppa, at anchor in the Bay; several Natal settlers had taken refuge aboard these ships. George Cato, at no slight risk to himself, went out in a boat to the Mazeppa to bring Richard ('Dick') King back to the British camp where Smith made the proposition that King should ride the 600 miles south from Port Natal to Grahamstown to carry the news of the besieged garrison and request reinforcements. King took up the challenge, leaving Port Natal in company with Ndongeni. Two of the best horses in the detachment of Cape Mounted Rifles were supplied, the Cato brothers, George and Christopher, ferrying King and his companion (the horses swimming at the stern) at dusk from the inner shore of the Bay to the Bluff. King covered the distance to Grahamstown in 10 days (including two days on which he was too ill to travel) - a journey which would normally take 17 days. Ndongeni, who rode bareback, had to return when the pair reached the country of the amaXhosa.


As a direct result of this feat, reinforcements were soon dispatched to Port Natal, HMS Southampton embarking with troops from the Cape, and the schooner Conch from Algoa Bay, commanded by Captain William Bell, with a company of the 27th Foot under Captain Durnford. (Dick King having recovered from his exertions was also on board the Conch). The schooner arrived first at Port Natal, followed shortly by the Southampton - this frigate drew too much water to cross the Bar at the entrance to the harbour and in order to land the troops the smaller Conch took Southampton's boats, packed with soldiers, in tow and made for shore, running the gauntlet of enemy fire from the Bluff, while the frigate shelled the Dutch encampment. 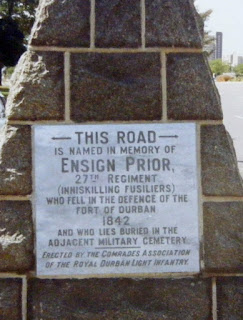 Once the landing had been achieved, resistance faded and the trekkers withdrew from their encampment at Congella. Smith's besieged force was relieved, but it was evident they had been through a hard time under incessant rifle and canon fire. Seriously wounded men, some of them amputees, and others suffering from dysentery, lay in shallow trenches. There was no sanitation and virtually no medical supplies. Horses had been killed for food and the stench of hides and offal pervaded the air. There was no wood for cooking, and the water from a well dug within the camp was of poor quality. The garrison had been living on 10 ounces of horseflesh and biscuit dust per day.


Ensign Prior of the 27th Inniskillings was killed during the one sortie from the camp. He is remembered on the memorial to his regiment, which now stands in front of the Old Fort, Durban.


See The Song of Ndongeni:
http://www.archive.org/stream/balladsofveldlan00lystrich#page/30/mode/2up 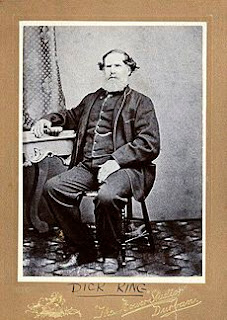 Richard Philip King (1813-1871) born in Chatham, England, came to South Africa with his family as part of what is now known as the 1820 Settler emigration initiative, settling in Albany in the Cape Colony. When Dick, as he was always called, was about 15 the King family moved to Port Natal. He became a trader and colonist at this small frontier settlement and was intimately acquainted with a number of historic personalities. His famous ride of 600 miles in 10 days to carry the news of the besieged British garrison at the Port was his moment of glory, earning him a place in the history books. What is less well-known is that King had already distinguished himself in 1838 after the massacre by Dingane's forces of Pieter Retief and his followers at Weenen, when King undertook a 4-day journey from Port Natal on foot in an attempt to warn other trekker groups of the impending danger.