Wreck of the Annabella, Port Natal 1856

The ship Annabella, 200 tons, Capt. Louis Wilson, arrived on the 21st January [1856]. She was unable to come inside until the 26th, when she crossed the Bar in charge of a Pilot, with the Master at the wheel, and attended by a steady N.E. breeze. There was said to have been 16 foot of water on the Bar, but,  there being a moderate sea on, she touched between the swells, lost steerage way, and drifted on to the Lee Bank, where she was taken aback in an unsuccessful attempt to make a stern board (i.e. get off backwards), and so swing round head to sea. Notwithstanding attempts to move her, she hung on the bank all night.

The crew were landed, and next morning she was found to have 8 feet of water in her hold. Heavy seas had set in and her seams having opened, all hope of her floating again was abandoned, though efforts were made to discharge her cargo of general merchandise, the greater part of which was damaged and passed under the hammer of Mr. Auctioneer Acutt, who disposed of the hull and cargo left on board on the 4th February.

Captain L Wilson eventually settled here with his wife and family, and became a Burgess of Durban on establishing a Ship Chandler’s business at the Point, where he has been succeeded by his son, Mr L J Wilson.


The Annabella, not so fortunate as the Princess, gave her name to that locality, and the Annabella Bank became, in all Harbour Board records and reports, synonymous with the earlier Lee Bank. The existing North Pier passes over the site of the disaster and marks the grave of the Annabella. The Lee Bank has, in consequence, asserted its prior rights, calls Nature to its aid, and continually obtrudes itself in unexpected places to the perplexity of Engineers and navigators. 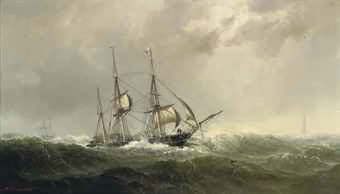 Such are the vagaries of life - that if it were not for the Annabella Bank - then I would not be here. I am a fifth generation descendant of the Chaney family who were aboard the ship when it struck the sand bar. So traumatized was my Great Great Great Grandmother (Susannah Chaney nee' Shepherd)by the experience that they did not pursue their journey to India and settled in South Africa, Cape Town. They had initially voyaged from Kirkee in India for a leave of absence and recuperation in Cape Town. Heading back to India after two years, Benjamin Chaney and his wife Susannah and their 4 children, James Chaney, William Chaney, Emily Louisa Hogard Chaney and Mary Chaney boarded the 'Annabella' in Cape Town. Their journey took them as far as Durban were the ship was wrecked. My Grandmother Charlotte Emily Chapman nee' Dendy, who died aged 104 in 2013, related to me how the Chaney's were brought ashore in rowing boats. They lost all of their possessions, landing with only the clothes they were wearing. Regards - Graham Leslie McCallum