It’s strange that White didn’t send more people out of Ladysmith while the railway was operating southwards. As it was, he was left with about 22 000 mouths to feed. The Town Clerk of Ladysmith, George Lines, noted that there were 2 200 white civilian residents, 1 200 Indians and 1 500 Africans, probably a conservative estimate.
There had been an influx of refugees from outlying areas prior to the start of the hostilities. White’s fighting force consisted of 572 officers and 13 000 men, including the regulars (infantry, cavalry and artillery), irregulars, volunteer units and the Naval Brigade.

The biblical analogy of the loaves and fishes comes to mind, but the situation in Ladysmith at the beginning of the siege didn’t appear quite that critical. An immense number of stores had been stockpiled. True, some of these had been sent up to and subsequently lost. However, there remained 979 000 lbs of flour, 173 000 lb of tinned meat, 142 000 lbs of biscuit, 267 000 lbs of tea, 9 500 lbs of coffee, plus quantities of maize, oats, bran and hay, as well as wine, spirits and medical supplies. There were 9 800 horses and mules, 2 500 oxen and a few hundred sheep, and these animals could be eaten if necessary. Additionally, tinned and other provisions held by Ladysmith’s citizens were purchased by the Army. 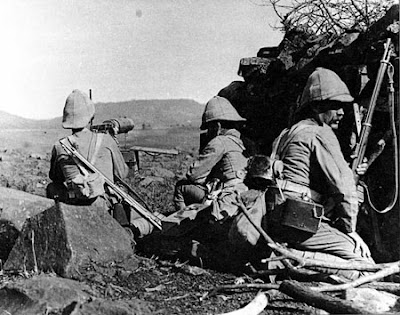 There was no immediate prospect of relief. White’s army made some forays out of Ladysmith, including a night sortie on Gun Hill undertaken on 7 November and an attack on Surprise Hill on 10 November. It was fortunate that the big Naval guns had reached Ladysmith before the trap shut tight. Without these to match the might of the Long Toms, the story of the siege could have been a much briefer narrative.

Now it became a waiting game. As White said to his staff on 20 November, ‘We have two things to do – to kill time and to kill Boers – both equally difficult.’

THE BESIEGERS
Ladysmith and its defenders were all that stood between the Boers and the . Commandant-General Piet Joubert allowed thousands of his burghers (whose real value lay in their mobility as mounted infantry) to be stuck outside Ladysmith, which proved to be a tougher nut to crack than expected. General Ben Viljoen in his later reminiscences remarked, ‘The whole siege of Ladysmith and the manner in which the besieged garrison was ineffectually pounded at with our big guns for several months, seem to me an unfathomable mystery…’.

The truth is that Joubert thought Ladysmith would surrender. He couldn’t have been more wrong.