On the expiry of the ultimatum, Boer commandos swept over the mountain passes into and on 20 October met British forces under General Penn-Symons at Talana hill near . The British won the day, but at great cost of lives including that of Penn-Symons himself.

It was left to General Yule to abandon , plus a large number of stores, to fall back on Ladysmith. Yule’s 4 000 men made a valiant retreat, staggering wearily into the town on 26 October. Gunner William Netley of the Dundee garrison compared this feat to the gruelling march to during the Afghan War.

Four days after Yule’s column made it into Ladysmith, a naval brigade with two 4.7 inch guns, three long 12 pounders, one short 12 pounder and four maxims arrived. This fire power was to prove vital in defending Ladysmith.

In the interim, British troops under General French successfully repulsed the Boers at Elandslaagte, but White abandoned the ground having had news of a strong Boer advance on Ladysmith. An action was also fought at Rietfontein on 24 October, primarily to cover the retreat of Yule’s column from . By 27 October, the Boer commandos were concentrated around Ladysmith, and starting to emplace their Long Tom guns on the hills overlooking the town. Martial law had been declared and the Natal Field Force was centralized under White.

The net was drawing tighter, and two attempts were made to prevent total Boer encirclement of the town. One was the debacle at Nicholson’s Nek on ‘Mournful Monday’, 30 October, where the Boers overran British positions and took 800 prisoners. The other engagement, on the same day, was in the vicinity of Farquhar’s Farm (the Battle of Ladysmith or Battle of Modder Spruit), where after some heavy artillery exchanges, the British were ordered to retire on Ladysmith. 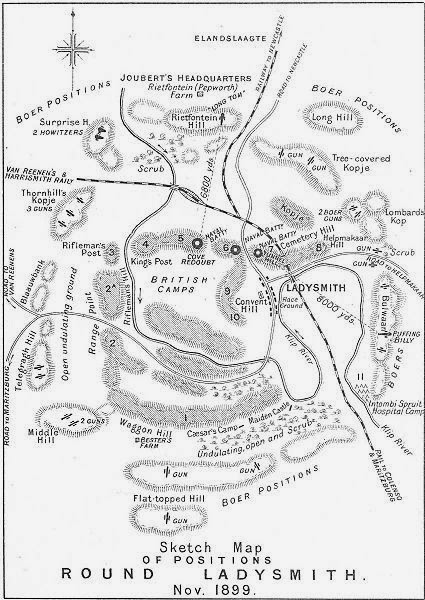 On 2 November the last train steamed out of the town under enemy fire, carrying civilian refugees and also Generals Yule and French. In the afternoon, the Boers cut telegraph and railway communications and destroyed the waterworks. Ladysmith was surrounded and the bombardment of the town began.