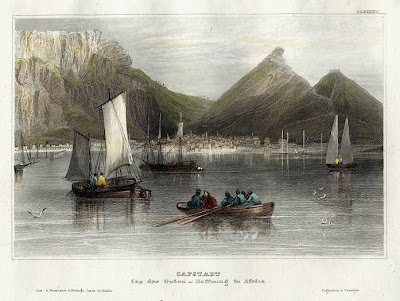 At the Cape two children had been added to the family: a daughter, Ellen Harriet, born in May 1846 and named for the child lost two years before, and a son James Colquhoun born in on 28 December 1847. The celebrations were scarcely over when James Ramsey Caithness’s brig the Lady Leith was wrecked on Thunderbolt Reef on 27 February 1848. Her remains were sold at auction.*

In September 1847 and February 1849 appears as Master of the schooner Louisa, previously one of the ships sailed by H G Caithness, the disappearing mariner husband of Pamela Halt Okes.

May 1848 and August 1849 saw commanding the brig Workington: at this stage he was taking whatever voyages were offered by the ship agent. He may even have been the W Bell listed as master of the Bucephalus on a voyage from to arriving on 9 March 1848.

His services rendered in 1842 weren’t entirely forgotten, though the authorities needed a push in the right direction. They received it towards the end of 1847 when the inhabitants of Port Natal petitioned the Lieutenant Governor for ’s reinstatement ‘in the full enjoyment of his former office and Emolument’.

The signatories, who included the Cato brothers, Richard King and other prominent citizens, expressed their ‘strong conviction of what is due by them to Captain Bell, as a worthy, faithful and meritorious Public Servant against whom … no charge of any dereliction of duty, or of any inferiority for the perfect fulfillment of the hazardous and responsible functions of his office has been preferred’. They acknowledged the ‘deep obligation’ they owed to Captain Bell ‘for the preservation of their life and liberty, while adhering to the Standard of their Queen and Country’.

These views were forwarded to the Secretary of State for the Colonies, who subsequently considered that had a fair claim to employment by the Natal Government.

William Bell must have felt indebted to his corps of supporters at Port Natal. It would not be the last time that George Cato stepped into the breach on behalf of his friend.

Thank you for your supportive feedback, much appreciated.
Keep visiting! Mole