In all likelihood William Falconer served his apprenticeship (from 1828-1832) on his father James Falconer’s ship the Ealing Grove, 383 tons, built at London in 1792. The Ealing Grove was sheathed with copper over boards, the copper being repaired in 1829.

She covered many sea miles, trading until the mid-1830s between that city and places such as Demerara - a colony in the Guianas on the north coast of , famous for its sugar.

The experience gained by the young Falconer during these years under his father’s guidance would have been invaluable. It was through no fault of William’s that his barque Johanna, 275 tons, lying at , was driven on to the rocks when her cables parted on 5 April 1848. A comparatively new ship, built in 1843, she had been to without mishap the year before under Falconer’s command and he had had 19 years’ sailing as a merchant mariner. She became another victim of the infamous south-east gales at this port. Johanna was a total wreck but no lives were lost. The Spectator (), reported on 10 June 1848 that Falconer’s Johanna was not alone in her disaster: the Martha under Capt W Woolley, from , was wrecked in the same gale at ; her crew was saved.

At this date (1848) the Falconers had left the Colony and were residing at Wapping: William had returned to his area of origin. We can track his upward mobility by his subsequent changes of address: in 1851 he was of 34, Albert Sq., Ratcliff, Stepney; between 1853 and 1858 the family had moved to King Edward’s Villas, Hackney. William was by then a successful Ship Insurance Broker and Ship's Agent, with offices in in the City, operating under the name Falconer and Mercer.

On 30 October 1856 William Falconer was granted the Freedom of the City of .* 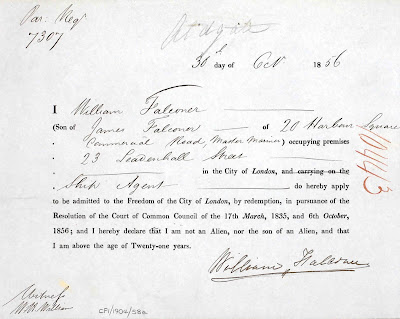 William and Ann had fourteen children. For further details about this family see:
http://wc.rootsweb.ancestry.com/cgi-bin/igm.cgi?op=GET&db=haydencowan&id=I1339