Mariners: Caithness and the Sea Gull 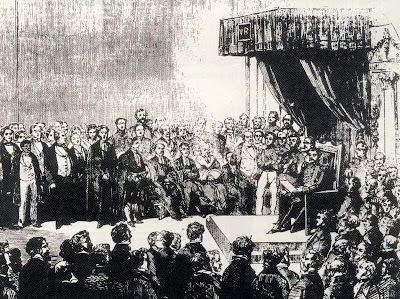 It was 1854 and nothing much had changed for Cape coastal mariners despite the historic decision recently taken by Queen to grant the Colony Responsible Government.

The opening of the First Parliament was a ceremonial affair held at Tuynhuis, the residence of Governor Grey, who presided. The power of the was limited: the Governor, appointed by the Queen and the Home Parliament, still called the shots.

More pressing concerns than the newly drawn-up constitution occupied the maritime community. On 15 July 1854 at there was a violent gale, said to be one of the most severe in many years, causing havoc when several ships, riding very heavily on an increasing sea, parted their anchors. The barque , carrying cargo, went ashore at the Castle, and not long after the Wild Sea Mew under Captain Grainger collided with the Sea Gull, commanded by Captain Caithness.

The story was dramatic enough for the overseas press to pick it up and run with it for a few days, though there were differences of opinion as to the precise date of the gale and the name of the Wild Sea Mew (given as White Sea Mew in some accounts). From the Daily News:

The following is an extract of a log kept at the port-office, giving the particulars of the gale in Table Bay … At 12.10 p.m. the Canopus parted from her remaining bower chain when she immediately slipped the remainder of it and ran ashore a little to the southward of the Castle Ditch. The life-boat was immediately dispatched in charge of Mr Wilson, the assistant port captain, who succeeded in landing the crew in safety…  At 1.45 the schooner Wave Spirit parted her bower cable … At 4 p.m. the ship White Sea Mew parted both her bower cables during a heavy squall from the northward, fouling and taking with her the brig Sea Gull, both of which immediately slipped the remainder of their chains and ran on shore near the Castle Ditch, close to the Canopus [Captain Crosby]. Part of the female passengers and children of the brig [Sea Gull] were landed in the life-boat shortly after she struck, but in doing so the life-boat got stove* and seeing that the remainder of the passengers and the crews of both vessels were perfectly safe in continuing on board, all other efforts to land them that night were given up.

Both vessels came well up on the beach and remained firmly imbedded [sic] in the sand. Midnight. Still blowing a very heavy gale and tremendous sea setting in on the bay. The officers and crew of the port office establishment with life-boats and all other apparatus in attendance, opposite the vessels, all night. After the White Sea Mew came in contact with the Sea Gull she then fouled the John Knox taking her bowsprit out and doing her other serious damage.**

Further ships caught in the debacle were the Margaret Milne, the Empress, the Euphrosyne, the American barque Silver Cloud, the schooners Prairie and Rachel and the Gitana. Apparently the barometer had given no prior indication that such a severe gale was in the offing. By the following morning it had abated but over 30 cargo and other ships had been sunk and otherwise destroyed.

The question remains: was Captain Caithness of the Sea Gull James Ramsey Caithness? Reports mention that this brig was bound for with passengers who were already on board when the gale struck. Would James Caithness have been undertaking this type of voyage at this date? More investigation is required before this Master’s identity can be established beyond doubt.

The Zuid Africaan reported in July 1854: 'For Australia. The Sea Gull Captain Caithness leaves this port today. She takes a full cargo and the following passengers: Cabin: Messrs Harris, Melle, and West and 2 boys; Mesdames Harris and child, Burke and 5 children; Mrs Steuart, Miss Vipond, Miss West, and 40 steerage passengers.' [This was relayed in The Sydney Morning Herald 19 Sept 1854, some time after the event; the planned voyage did not take place as the Sea Gull, though refloated, was later condemned.]